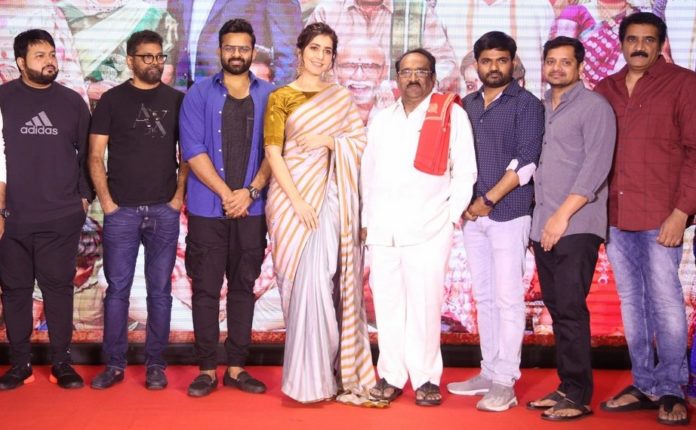 So Sai Dharam Tej is officially Sai Tej. The change in his name had got him a hit or is it Rao Ramesh? Heroes who are in continuous flops only will agree to do such subjects. They won’t mind if their role is small. Now that Rao Ramesh single handedly steered this film to a victory, he will not get a similar role, a better role again.

Why? Heroes need films that revolve around them and character artistes are there only for padding. They should help add value to the story but shouldn’t dominate the hero. Allu Aravind knew that Rao Ramesh is a shark and he will swallow every other artiste.

If the film releases in January it will be a threat to his own company film Ala Vaikuntapuram Lo. Allu Arjun’s film releasing with Pratiroju Pandage is a bad planning. It is like Indigo flight have a competition with another Indigo flight. Aravind produced the film, to be in Chiranjeevi’s good books.

Coming to Sai Dharam Tej, he will never work in a family subject like this again where people don’t even remember him or his acting but continuously harp on Rao Ramesh, applaud him and want an encore. He will use this as a stepping stone to do other films. Tej knows he is not the hero of the film.

The subject is old, clichéd but it is Maruti who made it interesting.  Maruti unlike Boyapati Srinu doesn’t restrict your acting. Srinu shows his biceps, , makes you stand in one place and as the hero enters the scene…there is an earthshattering noise. The director tells you stand in one place and turn your head as the hero enters. This is restricted acting and frustrating for the artiste whereas Maruti just allows actor to be himself and do what he wants.

If you speak four dialogues in a film, your length is cut. By giving freedom to an artiste we allow them to be spontaneous. Take for instance Satyaraj, “semi final” dialogue is not written by a writer, it is a spontaneous line by Satyaraj.

Coming to remunerations, a character artiste is always treated badly, while his characters end abruptly and there is no finishing, made to look like orphans…they are even paid less or nothing at all. If it is the same film, the hero gets a huge hike but the character artiste gets nil.

After doing 100 films, Rao Ramesh got a role to do like this. If character artistes wait for a while for a better opportunity, people write them off. They say he isn’t doing films and is acting pricey. If they slash their rates they are labelled as not having market, low in demand.

Murali Sharma also got a fab role in Vijetha but the film flopped, also it is not an entertaining and a comedy subject. People watch entertainers only and come in droves. Writers should write dialogues for the film not for praising the hero alone. People are smart and will see through it.

Had Solo Brathuke So Betteru released on May 1st, Subbu would have been planning what to do next for his next movie but w...
Read more
General News

The COVID-19 pandemic is shaking the entire world and every country is facing a severe economic crisis due to this deadly virus. Most of...
Read more

Had Solo Brathuke So Betteru released on May 1st, Subbu would have been planning what to do next for his next movie but w...
Read more
Movie News

Is there a twist to Mahesh-Chiru combo rumors?

Recently Mega Star Chiranjeevi speaking to a Telugu daily has revealed that Mahesh Babu was never considered for the special role they had in...
Read more
Movie News

How Chiranjeevi and Pawan Kalyan felt on PUSHPA first look?

Young hero Nithiin after series of flops bounced back with the film Bheeshma. The film which is a complete entertainer impressed audience big time....
Read more
Movie News

Stylish Star Allu Arjun before the release of Ala Vaikunthapuramulo has announced two projects. One in the direction of Sukumar, which is titled Pushpa....
Read more

Airline services to get restricted after April 14th

Lock Down in India is creating financial problems for various sectors and the most affected one is the Airlines sector. After April 14th, few...
Read more
Political News

Andhra Pradesh is brutally hit by the COVID-19 pandemic and already 304 positive cases have been reported in this Telugu District. Yesterday, a 40-year-old...
Read more
Political News

Telangana Chief Minister KCR made it clear that even though the coronavirus in the country is under control, hundreds of lives were in danger...
Read more

Airline services to get restricted after April 14th

Lock Down in India is creating financial problems for various sectors and the most affected one is the Airlines sector. After April 14th, few...
Read more
General News

Had Solo Brathuke So Betteru released on May 1st, Subbu would have been planning what to do next for his next movie but w...
Read more
General News

The COVID-19 pandemic is shaking the entire world and every country is facing a severe economic crisis due to this deadly virus. Most of...
Read more
General News

“Arrest my husband” wife complaints to Police amid lockdown!

The entire country is under lockdown due to the COVID-19 pandemic. It is clear that non-essential travel is a violation of COVID-19 lockdown regulations....
Read more