Exclusive Interview: Swaroop RSJ – I want to do a multi-starrer with NTR – Allu Arjun 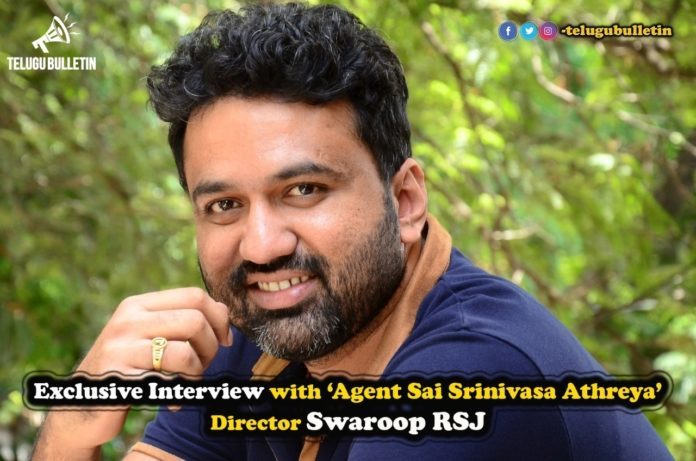 From the release of the trailer in 2019 till it paved way to a pathbreaking hit movie, the audience and the celebrities lauded the movie Agent Sai Srinivasa Athreya. The film belongs to a detective thriller genre, which director has reintroduced after a long hiatus.

We have interviewed Director Swarup RSJ who quit his job and made a come back in the industry because of a strong penchant towards film making.

You got a nod from your family to prove yourself within 3 years. Did u reach the target in expected Time? What was the Family response after the film succeeded?

I approached producers in the mid of 2016, but the producer was okayed in the early 2018, and finally in 2019 the movie released. Fortunately, it all happened within 3 years. After the result, our family was feeling jubilant. My dad firmly believed that I would settle in the film industry. He seldom watches films. But when he watched Sai Srinivas athreya, he really liked it. He also made many of his staff members, relatives and friends to go to the film.  Also 20% of the movie collections garnered in Tirupathi was sponsored by my father.

Management became tough in the shooting. It was difficult to manage everyone on sets as everyone were new, including myself, except the producer and the music director. I had an illusion that if we make a good film, distributors would surely come forward to buy the film. But in reality that doesn’t happen and there can be a lot of obstacles.

What was the precious thing you learnt in the film making process?

After finalizing the script, we feel dubious from the point of visualizing till the execution, whether we would pull it off as expected. However, in the midst of film making process we unnecessarily take opinions from different people but I realized later that the movie which we visualized earlier should be the one to stick on to. And this was well received by the audience too. So I learnt that we should just take the feedback but not implement each and every opinion.

The best compliment which you received after the release?

I felt happy when I, Naveen and crew went on first day to prasad labs for morning show at 8:30. All the audience began to shout Athreya!.. Athreya!. There is nothing beyond that cheering. I and Naveen shed tears at that moment. After that many heroes and directors too appreciated us. We have been in the hangover for 3 weeks whether it was true or not.

What was the best and worst feeling you had during this quarantine period?

The worst feeling was to witness the whole world paralysed by the demonic corona virus in the news. And the best feeling is spending quality time with my daughter, family and doing cooking, which I would miss when everything come backs to normalcy.

Who has impacted you the most as a writer and director?

In 2001, Chandrasekhar Yeleti broke the regular stereotype associated with the film format with his film ‘Aithe’. I was quite impressed by him. Also Sukumar, Trivikram Srinivas, Karthik Subbaraj, Rajkumar Hirani and in Hollywood, Martin Scorsese’s influence has created a profound impact on me as a writer and director.

You are both a writer and director..What role dominates you the most?

Since it’s a character driven movie, I focused more on developing the character and then added the necessary story line based on it. I generally write a 20 min climax and fabricate the story unlike Agent film. So the writer in me dominates more.

In which genre will your forthcoming film begin and with which hero?

My next film is going to be one of its kind. It’s a disaster based drama in present Time (Example – 2012). The visual effects also have broader scope. I strongly believe that story should choose a hero. I finished the script in February, while a big production is keen and pulling up the socks to bankroll the film. But as you know things came to a stand still due to lockdown. I would narrate the story soon to a hero. However, it might take 6-8 months for pre-production work.

Who is your all-time favorite hero? And what kind of film would you make with him?

My all-time favorite hero is Megastar Chiranjeevi and always dreamt to meet him. I got the Best Debut Director Award at Zee awards, which was graced by Megastar Chiranjeevi Garu. I went to Chiru Garu and sought the blessings from him. It was a moment to cherish for a life time. I would make a power packed entertainer in my unique style with Chiranjeevi. After Chiru, I like Nani garu.

If you have a chance to make a multi-starrer film, whom will you opt for?

In Telugu, I might opt NTR and Allu Arjun to feature in a film together. Both of them have swag and immense energy levels, which I really like. I wish to do an action packed film with them in John wick style.

How do you see yourself in the next 10 years in Tollywood?

Honestly, you should feel that you have made better films than a big commercial hit. You don’t have to make one or two movies a year. I would love to see that a Telugu film impacting many other industries and becoming talk of the town.

Top 5 Films When You store In Your Lap Top For Inspiration?

When is the agent film sequel?

That process is in the pipeline. Off late, I got a good point for the second part. The sequel is going to be completely a different format, unlike a hero donning a detective role. I was in the process of writing this story in Lockdown.

Which actor would you choose for your biggest dream project?

I aspire to make a pan India multi starrer movie to be reachable for all. I would choose Bahubali Prabhas and Perfectionist Aamir Khan as the heroes in that Pan India film.