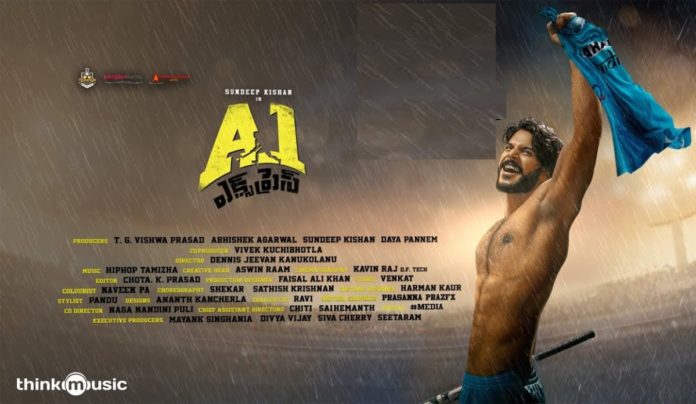 Sundeep Kishan is in great need of commercial success and his latest outing A1 Express is a remake of Tamil film, Natpe Thunai which was a decent hit in Kollywood. Let us see if the remake, which is being promoted as the first Telugu film based on the sport of Hockey lives up to the expectations or not.

Story: Sundeep Naidu (Sundeep) is a former Team India U21 player who puts his career at risk after the demise of his close friend. He later gets himself involved in a feud pertaining to the illegal acquisition of iconic Chitti Babu ground in Yanam. In the process, he meets Lavanya (Lavanya Tripathi) and falls for her. Can Sundeep and the head coach at Chitti Babu ground, Murali Sharma battle against the illegal acquisition?

What about On-screen performances?

Sundeep plays a hockey player in the film and he puts in his best efforts to do justice to the role. He has developed a ripped physique and carries the mannerisms of an athlete with conviction. Lavanya Tripathi is also seen as a hockey player. Her character has tomboy-ish shades. Priyadarshi and Rahul Ramakrishna plays brief yet very important roles and they do full justice to the same. Murali Sharma is a class act and he delivers a mature performance.

As mentioned earlier, A1 Express is a remake of Natpe Tunai. But the film only has a few similarities to that of the original. A few commercial elements were infused into the script. The flashback portion packs a punch but the succeeding sequences lack novelty and the tempo goes down. The climax portion is good in parts but it fails to sustain the desired emotion all the way through.

The director Dennis Jeevan extracts the very best from his lead cast. Hip Hop Tamizha’s background score is very impressive. He breathes life into many scenes with his stunning work. Cinematography is under par and there are quite a few blurry shots in the film. Editing is crisp.

A1 Express has a good premise and does have a few bright moments, but the narrative is inconsistent. A good scene is followed by a dull sequence and that is the biggest drawback of the film. All in all, it makes for an average watch.

Watch or Not: Go with very minimal expectations and it might make for an average watch.

A1 Express is an upcoming sports comedy film directed by Dennis Jeevan Kanukolanu and produced by T.G.Vishwa Prasad. It features Sundeep Kishan and Lavanya Tripathi in the lead roles while Murali Sharma and Rao Ramesh appear in supporting roles.

Second half report: Emotional scenes in the flashback are shot well, but feel like a lack in the flow. Climax match is appreciable, but makers could have shot it better.

11.25 A.M: The hockey match goes to 2nd half of the game. The film is heading towards the climax.

11.15 A.M: The Hockey match finally started with Suma and Harsha in the commentary box. The match is moving into an interesting phase.

10.55 A.M: The flashback episode ends. Rao Ramesh playing his game to get the Yanam hockey ground.

10.20 A.M: The second half started with Murali Sharma’s emotional touch

First half report: The movie starts with a simple note and scattered comedy. The film gets into the true story before 20 minutes of the interval. The hockey sequence before the intermission was good. The second half is going to be crucial for the film in terms of sports and emotions.

09.45 A.M: Amigo song visuals are too good, in between montage scenes and Sundeep-Lavanya’s lip kiss scene gives high for youth.

09.35 A.M: 30 minutes into the movie. Still establishing characters and Rao Ramesh’s character as a politician is good.

09.30 A.M: Lavanya Tripathi introduced as a hockey player. Sanju, who fell in love with her, is trying to impress the actress. Love scenes between them are happening now.

In early July this year, Union Minister of Law and Justice, Kiren Rijiju, clarified that the centre has nothing to do or say with...
Read more