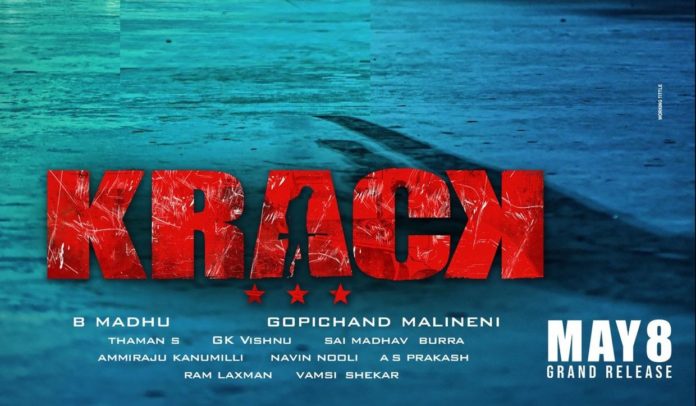 Mass Maharaja Ravi Teja is going through worst phase of his career. His last 4 films bombed big time at the box office. His latest movie Disco Raja hasn’t given any sort of reprieve for him.

Instead the movie is one of the biggest failures for Mass Maharaja. His market has hit rock bottom with Disco Raja failed to recover even half of the investment. Currently Ravi Teja’s hopes lie on his upcoming movie Krack which he is doing in the direction of Gopichand Malineni.

The duo earlier collaborated for hit films like Don Seenu, Balupu. Now it is their third time working together and they want to make it a memorable hat-trick film. Ravi Teja is donning Khaki in the movie.

While Shruti Hassan is making her comeback into Tollywood with Krack. Shooting of this film is progressing at a brisk pace and according to the latest update movie is looking for May 23rd release.

SS Thaman is composing music for the movie and the latest update is teaser of the flick is getting ready. It might be revealed this month.

Thaman is excited about the film’s teaser and he took to twitter and expressed the same. “I just saw omggg what an energy” is what Thaman tweeted. Hope the film will be as rocking as the teaser.

Get ready to all #RTF FANS 🔊 pic.twitter.com/z0HsZnl9M4