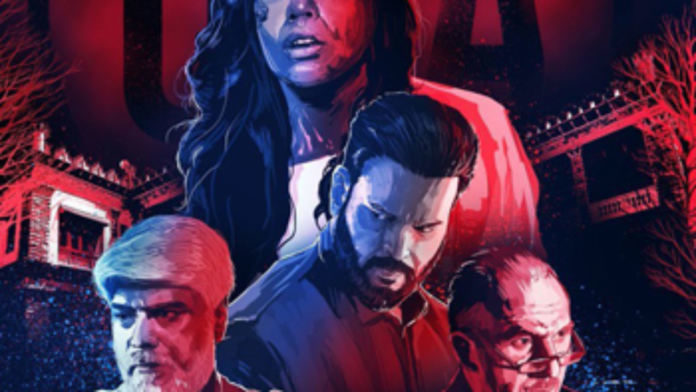 Madha which is said to be a psychological thriller has won 7 best technician awards, 8 best director awards, 3 best feature film awards and 3 best heroine awards in different film festivals all over the world. Liking the script Harish Shankar and Mahesh S Koneru has backed it. Let us see how the movie is.

Nisha (Trishna Mukharjee) who is an orphan falls in love with Arjun (Venkat Rahul). After many trails Arjun gets movie offer as cinematographer and he leaves Nisha for two weeks. Exactly in those days, Nisha faces some troublesome circumstances. She suffers mental trauma and at the same time due to her behavior many will get affected. After their complaints, Nisha will be admitted to mental hospital.

What exactly happened to her? Who does this to Nisha? Will Nisha escapes from there? Has Arjun comes to her rescue?

How about On-Screen Stars performance?

This movie revolves primarily around Trishna Mukharjee’s character. She has done 100 percent justice to her character. She has done exceptionally well in emotional and mentally disturbed scenes. Trishna is fine on looks part too. Venkat Rahul has excelled in a character which has negative shades. He has given a very matured performance. Anish Kuruvilla has done justice to the character which turns the story all over. Ravi Varma has shown best variations in his character. Bikramjeet Kanwarpal, Vinod Varma and others have done justice to their characters.

Story wise it is not a novice point. We have seen similar subject in Anushka’s Bhagamathie. So Sri Vidya Basava has concentrated more on screenplay part. psychiatric lecture scenes which comes at the start and sub plots in the first half seems interesting. But second half hinders the experience a bit. They failed to have gripping screenplay in second half like in the first half. Climax too seem to be rushed. Overall Sri Vidya Basava should have concentrated more on second half, the film would have given a thrilling experience for the audience.

Abhiraj Nair cinematography is excellent. Every frame in the movie is fantastic. Color pattern he used in the movie is superb. Art director has given beautiful support to cinematographer. Otherwise these frames wouldn’t have the same impact. Naresh Kumaran’s music succeeded in giving extra edge to every scene. However in few scenes, BGM is too loud.

Prasanth Sagar Atluri who has written the script and dialogues has done decent job. Scenes which hold the suspense was conceived well. However the impact he has shown at the top will not reflect towards the end. Dialogues suit the script. Sound mixing by Aravind Menon is on top level. Though Madha is a small movie, Indira Basava’s production values are such that it doesn’t seem like a small movie.

Madha has won several awards at the international level. It has got the backing of Harish Shankar and Mahesh Koneru. Technically Madha is excellent. All the technicians has done excellent job. It is sure that all of them will have bright future in TFI. Coming to audience perspective, like said before, though the film opens on an interesting note, second half failed to attract the audience. It taking more care towards the end, then Madha would have been a memorable film.

Immediate reaction at Intermission: Confusions are good but second half plays key role.

Immediate reaction at end credits: Twists and thrills are not new.

Watch or Not?: Yes for those who like psychological thrillers

Box Office Status:
Madha got released in decent number of theaters. However the film will have tough time at the box office with situations not so favorable outside the theaters. The film too hasn’t generated ultra positive talk. Keeping aside box office perspective Madha will receive few awards for sure.

Jr NTR will soon be wrapping up his portion of RRR and he is scheduled to join hands with Koratala Siva for his next...
Read more
Movie News

Akhil Akkineni is awaiting the release of his upcoming film Most Eligible Bachelor which is helmed by Bommarillu Bhaskar. The film is slated for...
Read more
Movie News

Pawan Kalyan recently tested positive for Covid and he is undergoing treatment to recover from the same. Prior to that, Pawan Kalyan was super...
Read more

The government of the state of Tamil Nadu has announced today that a night curfew would be imposed from 10 PM to 4 PM,...
Read more
Political News

The Telangana Bharatiya Janata Party shocked all after it won the Dubbaka by-polls and won a major share of seats in the GHMC polls,...
Read more
Political News

It is already known that the Bharatiya Janata Party and the Jana Sena party have a strong alliance with one another in Andhra Pradesh....
Read more
Political News

Janasena supremo Pawan Kalyan tested positive for Covid a couple of days ago and he is receiving medical attention now. He is being treated...
Read more

Akhil Akkineni will be joining hands with Surender Reddy for Agent which was officially announced earlier this month. It is billed to be the...
Read more
General News

The Andhra Pradesh Police department is not what it used to be. It is more polarised and divided than ever, and all of its...
Read more
Movie News

Jr NTR will soon be wrapping up his portion of RRR and he is scheduled to join hands with Koratala Siva for his next...
Read more
Political News