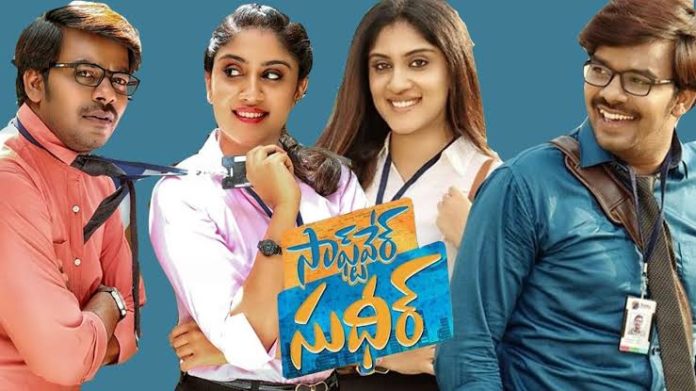 Sudigali Sudheer is well known name in every household with his TV shows. This guy is a multi talented with his acting skills, dancing and magic tricks etc., He has made his debut with the movie Software Sudheer which got released today. Let us check the review.

Chandu (Sudigali Sudheer) is a software employee who is a happy-go-lucky guy. He loves his colleague Swathi (Dhanya Balakrishna) and they both decides to get married. But unfortunately they come to know about Chandu’s horoscope. It says he will get killed soon. So as a precautionary measure they decides to do pooja with the help of Swamiji. But at the same time, Chandu gets involved in a 1000Cr scam. With a problem after problem, Chandu is now on a mission to prove his innocence and come out of that problem in horoscope. What will he do? How does he bring out the actual scam that is weaven around him?

Though it is for the first time, Sudheer will impress with his acting and dancing skills. Sudheer proves with his first movie that he is a good actor. Dhanya Balakrishna supports Sudheer well. Their pair looked good onscreen. Her character has multiple shades and she performed well. Sayaji Shinde, Posani, Indraja and Co have done well in their roles.

Cinematography by C. Ram Prasad is very good. Every frame looks pleasing to the eyes. Dance choreography is excellent. Anish Master has excelled in this department. Director Rajasekhara Reddy has taken up Story, Dialogues and Screenplay department too. Story is too old. Director tried to project it as a new one with a different kind of screenplay, mixing out two genres. But the outcome is too bad. Dialogues gives you mixed feeling and few of them are good and some of them are cheap. Direction too have two phases. First half is handled well while the second half takes a beating. Editing is bad. Few scenes can be chopped off.

Software Sudheer is a bore fest. If you are expecting Jabardasth type of comedy from Sudheer, then you are totally disappointed. There are only few laughs and the remaining were wasted. Sudheer entertains you more in Jabardasth than in this typical routine entertainer. This movie proves that Sudheer can act in a movie in a full length role. Other than that there is nothing you can expect from it. You can totally ignore it.

Superstar Mahesh Babu, who is basking in the success of his recent release Sarileru Neekevvaru, has jetted off on a vacation with his family...
Read more
Movie News

Krack is a again a story of a cop. In Vikramarkudu, the director gave it a light hearted treatment. Here Gopichand Mallineni, who is...
Read more
Movie News

There were days where Nandamuri Bala Krishna shone as one of the top heroes in the Telugu Film Industry with some blockbusters. But, the...
Read more