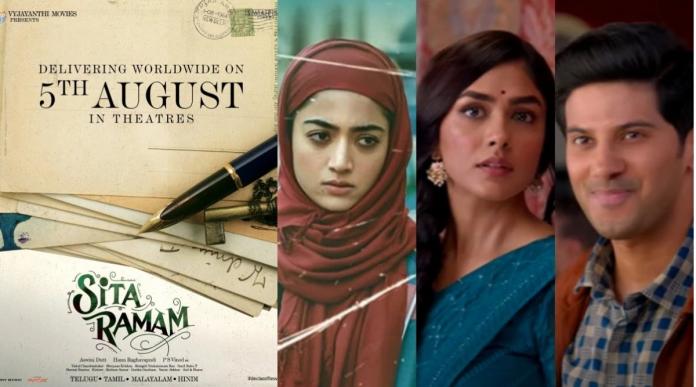 Dulquer Salmaan and Mrunal Thakur’s period love drama, Sita Ramam under the direction of Hanu Raghavapudi has hit the screens today. Let’s check how it goes.

Set in London backdrop, Afreen( Rashmika Mandanna) is in search of Sita to deliver a letter written by Ram. Quickly the proceedings shifts to the introduction of Lieutenant Ram ( Dulquer Salmaan) from Madras regiment. Set in 1965, Ram will be posted at POK along with his colleagues to protect the borders. Being an orphan, Ram receives letters from Sita Mahalakshmi( Mrunal Thakur). Eventually, Ram meets Sita after exchanging letters and love story blossoms between them. This is the time Ram goes on a secret mission to Pakistan and gets caught by the soldiers there. Did anyone help the Pakistan government to catch Ram who is on a secret mission? What happened to Ram and his love story with Sita? How is Vishnu Sharma( Sumanth) interconnected with the proceedings? To know that, you have to watch the film on the silver screen.

Dulquer Salmaan and Mrunal Thakur are a perfect pick for the film as they both look adorable as a couple on the screen. While Dulquer is stunning with his screen presence, Mrunal surprises with her facial expressions and acting.

As most of the film runs on the lead pair, both Dulquer and Mrunal carried the film on their shoulders with their impressive acting.

Rashmika and Tharun Bhascker are okay in their given key roles. Sumanth gets a meaty role and the actor delivers his best with a settled performance.

Sunil and Vennela Kishore evokes decent laughs in their comic roles. The supporting characters done by other artists are convincing in their respective roles. Noted actors like Prakash Raj, Gautam Menon are not utilized properly as their screen time is limited to a few scenes.

Music by Vishal Chandrashekhar is one of the major highlights of the film. Be it songs or background score, Vishal did cent percent justice to this period love story.

The cinematography work by PS Vinod and Shreyaas Krishna is outstanding as the visuals are amazing. The Kashmir valley is showcased beautifully. The period setup is presented nicely.

Editing work by Kotagiri Venkateshwara is good but would have been much better.

Coming to the direction part, Hanu Raghavapudi did a good job with the narrative part. His poetic presentation is largely convincing but would have focused on writing a racy scene order to aviod a few lag episodes.

In an overview, Sita Ramam is a period drama that revolves around the love story of the lead pair. Director Hanu Raghavapudi made sure to hold the suspense factor till the end with his narrative and overcomes the mistakes done in previous films. But on the flip side, the runtime would have been trimmed close to fifteen minutes for an even better viewing experience.

Final Report: Sita Ramam is an intense love story which carries suspense through out. Lead pair’s chemistry is superb. It has fabulous visuals and poetic narration, Director Hanu strikes the balance this time. Movie has Pan Indian appeal, will fair well with urban audiences.

05.50 A.M: Ram gets caught by Pakistani soldiers. Indian army disowns him as it was a secret mission.

05: 10 A.M: Sita will not be able to continue live with Ram due to circumstances.

First Half Report: First half of the movie is a passable watch and its all about Ram and his journey to meet Sita Maha Lakshmi, the story of Ram and Sita is set in 1965 with Afreen trying to find what happened to them 20 years later. All actors did well with their part. Story progresses with decent pace, draws some laughs and bit of suspense. How the story unfolds about Sita and Ram in the second half, what happens to them will decide the fate of the movie.

04:52 A.M: Afreen finds out the real who of Sita Mahalakshmi in the pre Interval scene. First half ends with a bit of suspense.

04:35 A.M: Movie goes back and forth between falsh back and present as different characters tell the story from their perspective to Afreen. Intha andam song is a good watch.

04.12 A.M: Ram starts to receive numerous letters from the public, he takes 2 months’ leave to meet all people who wrote letters for him. He gets an interesting letter from Sita Lakhsmi, she claims herself to be his wife.

04:05 A.M: Vishnu(Sumanth) and Ram ( Dulqer Salman ) are colleagues in Madras regiment protecting borders. Ram saves civilians using his people friendly tactics and becomes a hero in that regiment. He tells that he is an orphan in an interview.

3:55 A.M: The story begins at POK and shifts to London where Afreen (Rashmika) is introduced. She needs to deliver a letter to Sita written by lieutenant Ram.

Watch this Space For Exclusive Live Updates From USA Premieres from 6:00 PM EST

Sita Ramam is an Action- Romantic Drama film written and directed by Hanu Raghavapudi. It is produced by Vyjayanthi Movies and Swapna Cinema. The film stars Dulquer Salmaan, Mrunal Thakur (in her Telugu debut), Rashmika Mandanna and Sumanth.