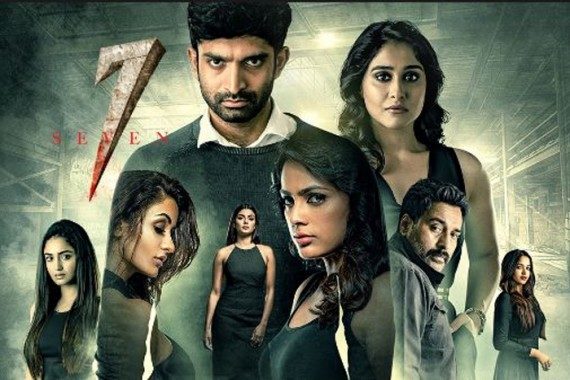 Karthik (Havish) works at a software company and aims to settle in America. Ramya (Nanditha Shweta), on the other side files a missing complaint on her husband. Following her, even Jenny (Anisha Ambrose) and Aditi Arya does the same. Police upon the investigation finds that Havish is the common husband of the trio and nabs him. But the police later finds that there is a person named Krishnamurthy, who resembles Karthik. Who is the real culprit among the duo and whether the existence of Krishnamurthy is true? The answers to the questions can be found in the rest of the film.

Havish impresses in a dual role and even heroine Regina comes up with a decent performance. She steals the show completely. Another heroine Nanditha Shwetha also does well in a neat role. Especially her glamour attracts many. Poojitha Ponnada, Nanditha, Tridha Chowdary, Aditi Arya and Anisha Ambrose were good for the roles they were offered.

Though the story is good, there is no engaging screenplay for Seven, which is what tests the patience of the audience in the theatre. But a few of the twists, especially in the pre-climax work well.

The background score is key to the films of this sort. But sadly Chaithan Bharadwaj comes up with a poor music in a few key scenes. He does an okay job in rest other scenes. Nizar Shafi does good justice to Seven as a cinematographer, but not as a director. As most of the scenes turn predictable, the mere purpose of watching a thriller movie goes vain. The editing is good and so the production values.

Though the story line of seven is impressive, weak narration spoils the mood of the audience. Adding to it, there is no proper chemistry between hero and heroines. Predictable twists, slow narration and clumsy screenplay makes Seven end up as a below average film at the box office.

Seven- Tough to bear even those seven minutes.