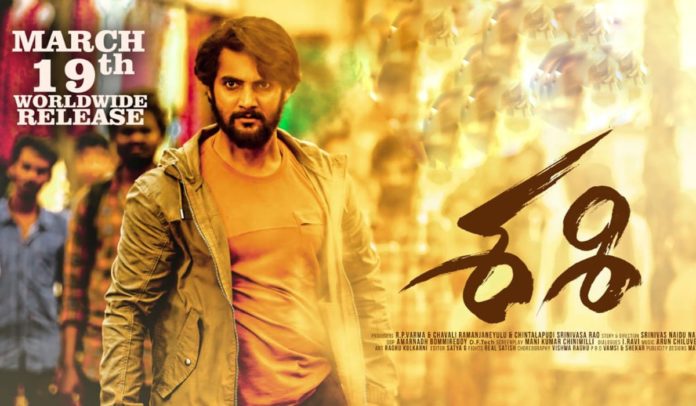 Aadi Saikumar is in desperate need of some credible success at the box office and he is pinning high hopes on Sashi, which built good buzz with a super hit audio single and an impressive trailer. Let us see if the film quenches Aadi’s search for box office success.

Story: Raju(Aadi) and Sashi(Siva) are close friends right from childhood days and they study in the same college. Incidentally, Sashi(Surabhi) joins the same college and Raju falls in love with her right at first glance. Even Sashi has feeling for Raju but doesn’t express them. One day, just Sashi plans to express her love towards Raju, the latter’s friend dies in an accident and he leaves rushes the location immediately. When he comes back, Sashi is not in college and he comes to know that she is out of town. Two years later, Sashi comes back and Raju tries to get back with her. But Sashi doesn’t recognise him and distances herself from him. Why didn’t Sashi recognise Raju? What the is story preceding and succeeding it?

Aadi plays a character that has dual shades. While one is that of a college student, the other is a depressed man who is struggling to get over the demise of his close friend and the humiliation from the girl he dearly loved. He is a natural performer and does complete justice to the role. Surabhi plays female lead and she looks cute. She does reasonably well in this challenging role. Ajay, Rajeev Kanakala, and Jayaram play supporting roles and they are apt.

The main asset of the film is its hit audio album. All the songs are pleasing to the ears and they are picturized well. The background score is equally good and so is the cinematography.

The director Srinivas Naidu pens a story that has nothing new to offer. The male lead being neglected by his love interest and him being depressed is a story that we have seen in multiple films. The conflict between the lead pair is not convincing enough. The screenplay is not upto the mark and there are many loose strings in the story. Many characters are ended abruptly. The dialogues are good.

The songs and trailer implied that Sashi is an exciting love drama but the routine story and outdated screenplay play spoilsport. The feel good moments which are quintessential for love dramas are missing in this film. The slow narration does not help the cause either.

Watch or Not?: You can comfortably give it a skip.