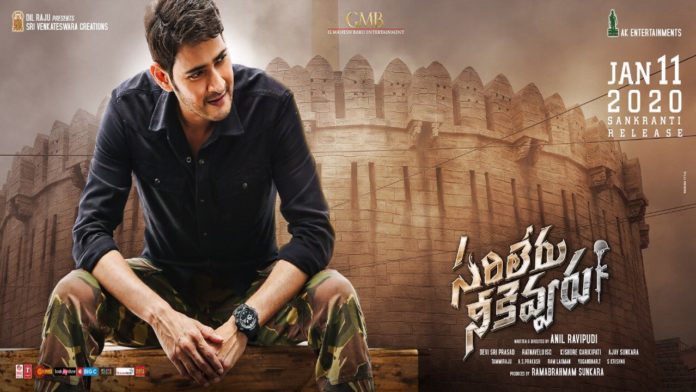 Super Star Mahesh Babu is back with another film Sarileru Neekevvaru. Post the complaints that the super star has not been doing any mass films off late, Mahesh has selected Sarileru Neekevvaru. The film with a lots of expectations has released today. Check out the review.

Sarileru Neekevvaru underlines the point of living with some responsibility in the society. Ajay Krishna (Mahesh Babu) is an army major for whom nation comes first. He is on a mission to Professor Bharati (Vijayashanti)’s house to carry some news. However, she is being troubled by minister Prakash Raj there. Now, Ajay Krishna comes to the rescue of Bharati and the rest of the story is all about how he teaches responsibility to the minister. How Samskruti (Rashmika) features in this setup is interesting.

Definitely it is a one man show from Mahesh Babu. He is energetic through out the movie. He is sincere as an army major, his comedy timing is perfect when it comes to heroine family. His action sequences are to watch out for. His dances are worth whistling after a long time. All in all, Mahesh Babu has given feast to his fans. Rashmika Mandanna has no importance in this setup. Her performance is not that worthy too. It is very good to see Vijayashanti after a long time. She has given a honest performance. Her emotional scene with Mahesh towards pre climax standout in the movie. Prakash Raj has been offered some lively character and he lived in that. He is funny, serious and brutal. However, his character boils down towards the end. Rajendra Prasad is okay. He travels throughout the film with Mahesh. Others are just fine.

Cinematography by Ratnavelu is top notch. This is just another example to show why Ratnavelu has been termed as the finest technician. Devi Sri Prasad has done fabulous job with his back ground music. His introduction music for Mahesh, Prakash Raj and interval block will impress you. All the songs are good to hear and have been picturized well. Editing should have been more crispier. Run time might be an issue for a regular mass masala commercial entertainer. Production values are top notch.

Director Anil Ravipudi whose main strength is comedy has focused more on star hero requirements. He has written a wafer thin story line. But it is his screenplay which will not audience bore for most of the times. Anil Ravipudi with this film has proved that he can direct a star hero film as well. He has delivered what Super Star fans are expecting off him. Direction has some flaws but he made sure he sugar coated with high commercial values.

Anil Ravipudi with his previous four films has proved that he knows the audience pulse perfectly. Though those movies have some flaws they were super hits. With Sarileru Neekevvaru, Anil Ravipudi proved that he can satisfy a star hero fan as well. His comedy timing is not up to the mark in this film as he concentrated more on fan moments. Sarileru Neekevvaru is one such film which will totally satisfy the fans but for the normal audience they will have their recommendations. Mahesh Babu’s impeccable energy throughout the film, his dances, his action, his comedy timing will be a feast for the fans. They are in due for this badly.

Immediate reaction at Intermission: Not so much comedy as expected but still worthy

Immediate reaction at end credits: Climax could have been better

Watch or Not?: Definitely yes for Mahesh Fans

Sarileru Neekevvaru has its own problems of lack of proper story, weak climax, much hyped comedy. But Super Star’s one man show followed by action sequences and performances of star cast, high technical standards will make the film worth a watch. Box office result will depend on how other biggie will perform on the other day. If that film fails, then there is no stopping Sarileru Neekevvaru. If that film being successful, then it will hinder the collections to some extent. Nevertheless, Sankranthi season is going to be huge plus for this movie. However in US, the film might find it tough to recover the business.

Sarileru Neekevvaru is Mahesh Babu’s one man show. He dominated the proceedings in this wafer thin story line. The movie starts off well, proceeds with high and low points. Interval block is excellent and second half starts on a promising note. Again the graph is up and down. Climax is unconventional and might not be liked by everyone. Wait for the full review.

03:25 AM: Some unconventional commercial climax brings the movie to an end. Review will follow soon.

03:20 AM: Some relief from emotional outburst. Good comedy scenes between hero, villain and heroine family

03:15 AM: Time for the title song, Sarileru Neekevvaru which has meaningful lyrics

03:11 AM: After the song, movie shifts into emotional mode, Scenes between Mahesh and Vijayashanti. Her expressions are flawless

03:08 AM: Much hyped Mind Block song has started. Mahesh Babu dance in this song are to watch out for. Whistle worthy stuff for fans

03:05 AM: Mahesh Babu has did something extra ordinary in the last 5 minutes which should be watched on big screen.

03:00 AM: So far second half is going nice with some elevation scenes for Mahesh – pure fans stuff. Action blocks are nice so far.

02:55 AM: Villain’s mistakes are getting revealed one by one. Mahesh is continuing his investigation

02:50 AM: Excellent Nallamala forest fight scene is on

02:45 AM: The actual story is getting revealed slowly and some intersting facts are showing.


02:40 AM: Again Rashmika re-entry into story and happening some comic scenes.

02:35 AM: Second half is in action mode. Confrontation scenes between Mahesh and Prakash Raj are on. Good elevation scenes designed by Anil Ravipudi

02:30 AM: It’s time for the third song Suryudivo Chandrudivoand its a family song. Picturized in beautiful locations.

02:25 AM: Mahesh Babu is behind Vijayashanti and solving her problems.

02:20 AM: Mahesh Babu enters villain house along with Vijayashanti. Some good dialogues and a fight episode

02:15 AM: Second half started on a good note. Vijayashanti explaining Mahesh Babu about how her family has got into the trouble. A small flash back episode

02:08 AM: ‘Sarileru Neekevvaru’ First half report: Movie has started with military episodes and takes comedy route and first half ends up with typical commercial fight. First half has its moments and is good. Train episode lived up to the expectations. Mahesh Babu has been at his best at the interval block. His comedy timing needs special mention.

02:05 AM: Fight is picturized well with punch dialogues back to back by Mahesh Babu. Movie comes to interval with the dialogue “Bomma Daddarillipoddi”. First half ends with a high.

02:00 AM: Villains are in search for Bharathi’s family and finally caught them. But Mahesh Babu enters the scene. A fight scene is on. Sarileru Neekevvaru title BGM by Devi Sri Prasad suits the mood.

01:55 AM: Prakash Raj character is designed interestingly. He is doing comedy and is serious alternatively.

01:50 AM: Train episode has ended and Ajay Krishna reaches kurnool. He meets professor Bharathi. She is in trouble and Ajay senses it.

01:48 AM: Time for the second song He is so cute. Rashmika is impressive with her steps.

01:45 AM: Much typed train episode is slowly losing its gas. Movie has turned a little bit boring.

01:40 AM: Much awaited character.. Bandla Ganesh enters the movie, he is a thief.

01:35 AM: First 30 minutes of the movie is intense and gripping. Mahesh as army officer is superb. Taking in this episode is nice too. After heavy duty military episode, movie takes comedy route. Anil Ravipudi has made sure his comedy timing is intact in this movie too. 30 minutes into the train episode and it is Good.

01:30 AM: Rao Ramesh is Rashmika’s father and his scene with Mahesh Babu where he explains about his daughters is super fun.

01:24 AM: This is Anil Ravipudi’s forte. Hilarious comedy scenes are coming now. Train episode is living up to the expectations

01:20 AM: The much anticipated Train episode has started. Rashmika as Samskruti makes her entrance.

01:15 AM: Time for Prakash Raj entrance. Devi Sri Prasad is doing an excellent work with BGM. His domination scene against protester has been showcased very well.


01:10AM: Hero starts his journey along with Rajendra Prasad to Vijayashanti’s village. He is on a mission

01:05AM: A rescue operation is being done by Ajay Krishna and his team. BGM is excellent in this scene.

12:50AM: Mahesh Babu gets introduced as Major Ajay Krishna which has been shot well. Bomb diffusion scene is on now.

12:45AM: Movie started with Vijayashanti in college. She is professor Bharathi.

Trivikram Srinivas has a lot of fan base in the Telugu states not only for his writing and direction skills but also for his...
Read more
Movie News

Superstar Mahesh Babu, who is basking in the success of his recent release Sarileru Neekevvaru, has jetted off on a vacation with his family...
Read more
Movie News

Krack is a again a story of a cop. In Vikramarkudu, the director gave it a light hearted treatment. Here Gopichand Mallineni, who is...
Read more