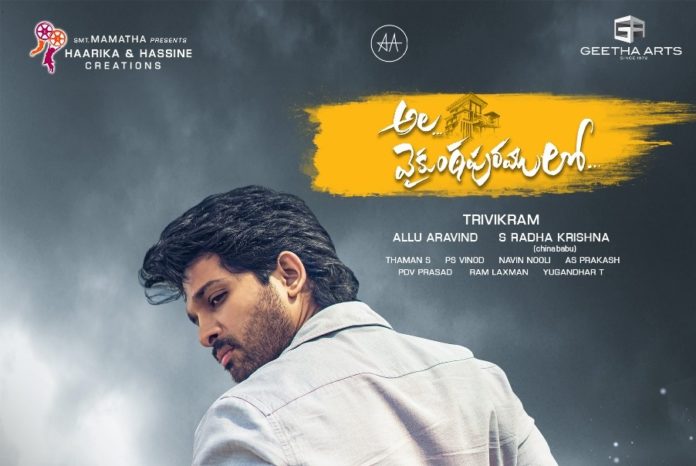 Stylish Star Allu Arjun’s latest family entertainer Ala Vaikunthapuramulo release is just three days away. Already there is quite a lot of buzz around this film. It is competing with another biggie Mahesh Babu’s Sarileru Neekevvaru.

The movie has been successful to impress audience till date with its promos and opening day is going to be quite huge.

Though releasing a day later than Sarileru Neekevvaru, Ala Vaikunthapuramulo is going to grab 60 percent of the theaters on its opening day and will hold most of them from its second day. The percentage will depend on the talk it will generate on opening day.

Ala Vaikunthapuramulo has done phenomenal business across the Telugu states, especially in Nizam. The film has been sold to a huge price of 19 Cr here to Dil Raju. Bunny’s highest in Nizam area till date is DJ which has collected a share of 4.7 Cr on its opening day, followed by 4.05 Cr for Naa Peru Surya and 3.2 Cr for Sarainodu.

But with Ala Vaikunthapuramulo things are going to change on a high note. The film is going to enter top 4 at the least. It is releasing in a large number of theaters and Telangana government has already given permission to screen 5 shows per day for single screens and for multiplexes they are getting ready with maximum shows. Already ticket rates has also been hiked.

These factors along with Sankranthi festival season + huge positive buzz is going to work in favour of the film. According to our estimation, Ala Vaikunthapuramulo is going to be Bunny’s best by a large margin.

If all goes well, Allu Arjun will cross the feat by double margin. Easily, Ala Vaikunthapuramulo will achieve 8 Cr share in Nizam for day 1.

That means it is going to enter top 5 highest earner Telugu films on Day 1 in Nizam. But will it be able to break the records of Syeraa and Baahubali 2 needs to be seen. Nevertheless, Bunny fans will be extremely satisfied with the opening numbers.

Here are the films with highest Day 1 shares in Nizam, Sarileru Neekevvaru will also feature in this list after January 11th.