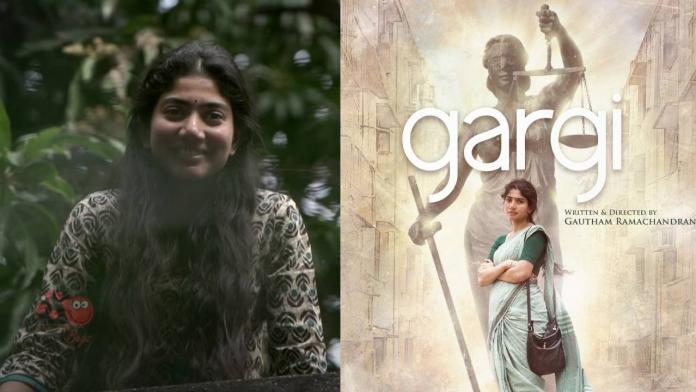 Starring Sai Pallavi in the lead role, Gargi, a social drama has hit the screens today. Let’s check how it is.

Gargi( Sai Pallavi) a school teacher will receive news regarding her father Brahmanandam, a security guard at an apartment’s arrest by the cops. Why do cops arrest Gargi’s father? Is he really a culprit in any case? What will Garji do to prove her father’s innocence, forms the crucial crux of the film.

Sai Pallavi did her performance-oriented role effortlessly. Her screen presence and struggle to rescue his father add realistic texture to the film. Sai Pallavi’s makeover as a typical middle-class girl is good and brings depth to the proceedings.

Kaali Venkat shines in his crucial lawyer role. His arguments in the courtroom will be loved by the audience. The way he carried the role will be remembered for a long time.
Young beauty Aishwarya Lekshmi did her extended cameo role quite well.Other artists who played key roles perfectly fitted in their respective roles.

Written and directed by Gautham Ramachandran, Gargi deals with a sensitive issue. The way Gautham created the premise and executed the proceedings will bring authentic texture to the film.

Music by Govind Vasantha is impressive as his background score registers well. The cinematography work is good.

Editing by Shafique Muhammed Ali is good. Production values for this limited budget film are okay.

In an overview, Gargi is a message-oriented social drama that has straight to point narrative. Sai Pallavi and Kaali Venkat carried the film on their shoulders and gave solid performances. But on the flip side, lack of commercial texture comes as a minus of the film. If you are a fan of intense social dramas, then Gargi will definitely end up as a satisfactory watch.