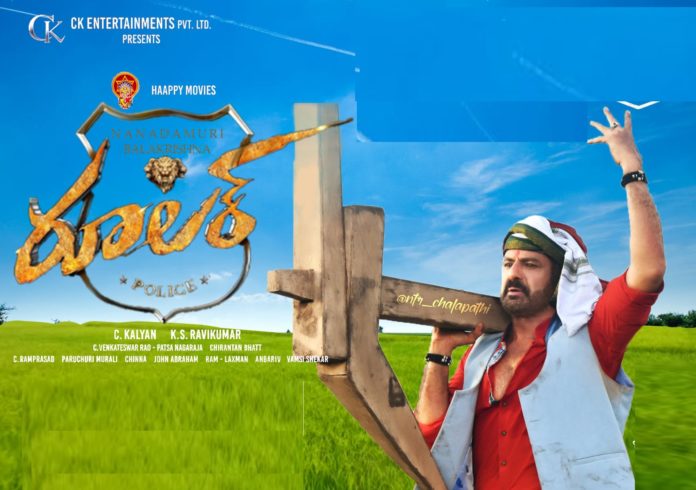 Nandamuri Balakrishna after back to back flops this year has come up with yet another mass masala entertainer Ruler. Promos of the film gave an indication that it will be in the lines of regular masala flicks. The movie with decent expectations got released today. Let us have a look at the review.

Arjun Prasad (Nandamuri Balakrishna) is the CEO for top software firm. Sonal Chauhan falls for Arjun eventually, though she first feels her like a competitor, being a boss to a software company. When the marriage plans are being made between them, Arjun goes into a tussle with Bhavani Nath. A major fight breaks out and suddenly people there identify Arjun as Dharma. Arjun Prasad is so confused now. Who is this Dharma? What does he have in connection with Arjun Prasad? Is he alive? What happens next forms the crux of the story.

Nandamuri Balakrishna is at his usual best in the film. He is athletic and danced well, he is energetic in fights. His look as a CEO to software firm is nice but the other look as a cop doesn’t suit him. It hinders the audience experience. Had they taken much care about his look as cop then it would have made a lot of difference. Sonal Chauhan is there for glamour treat. There is nothing much to talk about the performance but she did justice to the motive behind roping her in the movie. Vedika is gorgeous. She is glamorous and at the same time has some character to perform. She does well. Bhumika plays an important character. She suited the role very well. Prakash Raj is okay. A noted villain could be effective in this regular mass masala entertainers. Saptagiri and others did their best to evoke laughs. Jayasudha is fine as Balakrishna’s mother. Rest all are okay.

Music by Chirantan Bhatt is good. Sankranthi song, Padtaadu Taadu are good to listen and shot well too. But the background music is regular. Paruchuri Murali of Andhrudu fame has provided story and screenplay to this movie. Story is too routine. We have seen this type of stories since decades back. Treatment is old style too. Few dialogues here and there are good. The dialogues on farmers which comes in second half are clap worthy. There is nothing special to mention about cinematography. It is OK. Direction by KS Ravi Kumar is regular. There is nothing much he offers as a director. Production values are good.

Though a story is routine, makers these days are trying to induce some freshness with treatment but Ruler takes us back to at least 15 years. Ruler has its moments. Movie starts of in an interesting manner. The entire first half barring comedy scenes is dealt in an OK manner. There is nothing much to complain. Balakrishna impresses us with his new look. Even second half starts on a high. Dialogues on farmers are effective. Balakrishna will impress us in this particular scene. But once that scene ends, the film took a total beating of routine commercial flick. It becomes highly predictable and number of fights might irritate other section of audience other than Balayya fans and mass masala movie lovers.

Ruler is that kind of film which is targeted only at fans and B, C center audience. Though we cannot predict the verdict, it is highly unlikely that the movie will be successful catering to limited section of audiences.

First half is good with comedy working out in parts and Balayya looks stylish. But second half played the spoilsport where the major story was dealt. Overall, the story and treatment is routine to the core. Balayya’s energy in fights and dances works well besides many negatives.

Though second half starts on an interesting note, it all boils down after around 30 minutes. The movie runs into typical routine entertainer formula with too many fights weaved into the story. B, C center audiences might be okay with it but overall it is not up to the mark.

07:20AM: Bhavani Nath comes to know about this and sends goons to kill Dharma

07:15AM: Jayasudha reveals that Dharma is not dead and says that Bala is Dharma

07:10AM: Flash back ends with everyone thinking Dharma is dead in the fight

07:05AM: Bhumika tries to escape in train. Another massive fight between Dharma and goons are on now. This is another over the top fight.

07:00AM: Prakash Raj tries to kill Bhavani Nath but in turn gets killed by his brother.

06:57AM: In hospital, Bhavani Nath tries to kill Bhumika as she is carrying a baby in her womb and that child will be from lower caste.

06:54AM: Wedding fixed between Vedika and Balayya. Time for a duet song Mila Mila Andam.

06:51AM: Few comedy scenes are on between Vedika and Saptagiri. These are not up to the mark

06:48AM: The fight is over, Dharma gives warning to Prakash Raj’s brother

06:46AM: Dharma enters the scene and a mass fight is ON. Though the fights are over the top and physics defying ones, fans might be interested in them.

06:42AM: Prakash Raj’s brother kills Bhumika’s husband as he is from lower caste. Prakash Raj escapes with her daughter from reception. His goons are after them.

06:38AM: Bhumika Chawla makes her entry into the film. She had an inter caste marriage. Reception scenes are ON. Prakash Raj’s brother is Bhavani Nath, the villain.

06:34AM: Vedika is Nagineedu’s friend’s daughter. Time for Sankranthi song. Looks like a decent song with good lyrics. Balayya is so energetic in this song. Although the steps are somewhat comic, Balayya’s energy will impress us all.

06:30AM: Some comedy scenes are on between Balayya and Vedika now. She is looking gorgeous.

06:25AM: Though politically motivated, these dialogues will be liked by fans.

06:20AM: Balayya explaining the importance of farmers is effectively shot

06:15AM: Second half starts with flash back episodes. Balakrishna makes a dynamic entry as ruthless cop Dharma. A massive fight is on when villain tries to threaten Nagineedu, Balayya’s father.

Ruler, as expected has been dealt in a routine way. There is nothing much to offer in the first half with everything gets predictable. But Balayya has tried his best to entertain audience with his powerful fights and typical dance moves. Comedy works out in parts. Had this portion dealt in a better way here, things would have been a lot better. Nevertheless, first half is average and will be liked by fans. Interval block is nice. It sets up for an interesting second half. It all depends on Dharma now.

06:05AM: They calls him Dharma. Now Balayya is confused. Time for Interval with Balayya saying Dharma na? Who is Dharma? We have to see that in second half.

06:00AM: Some farmers and Vedika recognizes Balayya now. Movie is turning interesting.

05:55AM: Conflict arises between villain and hero. Time for a mass fight.

05:50AM: Balakrishna marriage gets fixed with Sonal Chauhan. On the other hand, Vedika is fighting against Bhavani Nath, the villain. She is supporting farmers.

05:45AM: Now the movie shifts back to Hyderabad. Time for main heroine Vedika entry

05:40AM: Time for another song Padtadu Taadu. Balayya’s steps are entertaining and will be liked by fans. Sonal Chauhan is oozing glamour onscreen.

05:35AM: Vedika is Nagineedu’s friend’s daughterSome comedy scenes between Sonal Chauhan, Srinivasa Reddy are on. They are trying steal Balayya laptop

05:28AM: Sonal Chauhan makes her entry into the film. She is the CEO of rival software company

05:22AM: Jayasudha names Balayya as Arjun Prasad. He is now going to Bangkok.

05:13AM: She adopts Balakrishna as her son and even makes him CEO to her software firm

05:08AM: Jayasudha saves Balayya.. She takes him to the hospital and Balayya has lost all his memory.

05:04AM: Now the much awaited Nandamuri Balakrishna makes his entry. He is severely injured.

05:00AM: Prakash Raj makes his entry into the movie. He is a minister in Jhansi. He gives lands in Jhansi to Andhra farmers.

Jai Balayya slogans at University of Hertfordshire, England. fans are waiting for the show.

It is known that Nitro Star Sudheer Babu has teamed up with director Mahesh for his upcoming film, which is titled 'Hunt'. Produced by...
Read more
Ruler Movie Review and RatingNandamuri Balakrishna after back to back flops this year has come up with yet another mass masala entertainer Ruler. Promos of the film gave an indication that it will be in the lines of regular masala flicks. The movie with decent expectations got released...