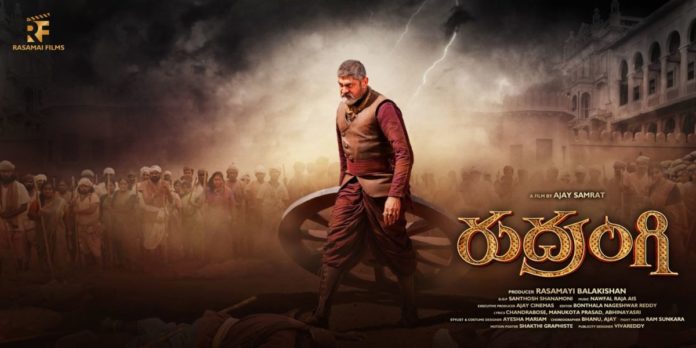 With his prestigious banner Rasamayi films, MLA Sri Rasamayi Balakishan, a singer, poet, and political activist, is now breaking into the film industry. A striking pre-announcement poster used by the producers to recently announce the release date and time of the first look poster of the debut project piqued everyone’s interest.

The powerful dialogue “Rudrangi Naadhi,” “Rudrangi belongs to me,” from Jagapathi Babu’s roaring voice at the conclusion of this motion poster will undoubtedly give you goosebumps.

The film has ensemble star cast includes Jagapathi Babu, Ashish Gandhi, Ganavi Laxman, Vimala Raman, Mamatha Mohandas, Kalakeya Prabhakar, Sadanandham and many other notable actors. Ajay Samrat written the story and wielded the megaphone for the film. Santhosh Shanamoni is in charge of cinematography, and Bonthala Nageshwar Reddy is in charge of editing. Nawfal Raja IAS, is composing the music.