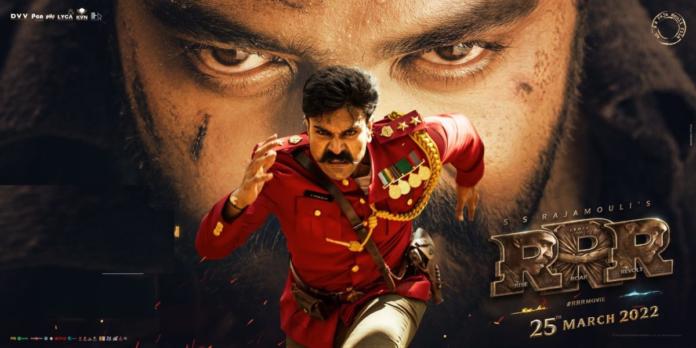 Rajamouli, Ram Charan, and Jr NTR’s RRR has hit the big screens across the globe today. The film released amidst excellent buzz and anticipation. Read on to catch our review of the film.

Story: Set in the 1920s era, RRR unravels the fictional journey of two of India’s greatest and yet unsung freedom fighters, Alluri Seetharama Raju and Komaram Bheem. Can Rama Raju and Bheem revolt as a combined force and wage an unrelenting war against the British? Will they be successful in the process?

RRR is powered by spellbinding performances from the lead cast. Jr NTR and Ram Charan excelled in the roles of Bheem and Ram respectively. These two powerhouses combine to fuel the machine i.e., RRR, and they come up with towering performances. NTR’s portrayal of rustic character Bheem, which symbolizes the water element in the film is otherworldly. The same with Charan. He exudes aggression and ruthlessness through the course of the film and elevates the fire element. Both the heroes have come up with career-best performances. Director’s attribution of fire and water to lead characters is not convincing.

Alia Bhatt plays a brief yet impactful role. She is pure class. She lights up the screen whenever she makes an appearance. Ajay Devgan too bags a small yet impactful role. He is at his usual best. Samuthirakani and Shriya deliver what is expected of them in supporting roles. Bheem’s lady interest Olivia Morris is beautiful and emoted really well.

The captain of the ship, SS Rajamouli is one of the finest Indian filmmakers in this generation. His vision, execution, and grit are of elite quality. It is not easy to execute a project as big as RRR and Rajamouli somewhat manages to reach audience expectations. Emotional quotient of RRR is not on par with Bhaubali series.

NTR’s entry block scores over Charan’s. The Naatu Naatu song is brilliantly presented. It has a strong narrative and both the heroes set the dance floor on fire. The pre-interval block is neatly presented and it packs a punch. But there is a bit of lag in the opening stages of the first half.

The freedom struggle is just a facet of the story and the main emphasis is always on the brotherly bonding between the two central characters and their personal interests. The second half starts off on a rather dull note, but it gets better towards the climax. Particular sequence where Ram has to punish Bheem gives an emotional high to the audience. Climax is divided in to three fight sequences which has high moments for the fans. The film ends on a high.

MM Keeravani’s background score elevates the narrative. His audio album is just okayish, but the background score is of his usual best standards in few vital scenes. Special mention to some brilliant work from the man behind the lens, Senthil Kumar who captured the spellbinding visuals exceedingly well. The production designing and VFX and CGI are good to the Indian standards.

Verdict: The film is fueled by stellar performances from the cast, Rajamouli mark narration, grandeur, and scintillating visuals. Even though Rajamouli has taken some cinematic liberty, he somehow managed it to play to the gallery. Keeravani’s BGM elevated few vital scenes. Despite the occasional lag in both halves, the film makes for a theatrical watch and it has the potential to set the box office on fire.

RRR was initially scheduled for theatrical release on 30 July 2020, which has been deferred multiple times due to production delays and followed by the COVID-19 pandemic. Finally, the film is scheduled to be released theatrically on 25 March 2022.

Final Report: Second half of the movie takes a bit of time to pick pace, then pace gets better towards the climax. Second half has more high moments than the first half. Event though Rajamouli has taken too much of cinematic liberty, he managed it to play it to the galleries. Keeravani’s BGM elevated few vital scenes.

01.20 A.M: An emotional episode between RCT and NTR. This sequence will be one of the highlights for this movie. Komaram Beemudo song is good.

00.45 A.M: Second half starts with Ajay Devagan and Shriya characters. Story goes to flashback when Charan as a kid.

The first half is marked by both heros introduction followed by story with few high moments and ends with a solid interval block. Ramcharan and NTR performances are top notch share equal screen space. Dosti and Natu Natu songs are good.

11.55 P.M: The scene where Charan and NTR saves a boy who gets trapped in fire and water is good, shot in a big canvas and must be seen in theaters.

11.50 P.M: Charan also goes to New Delhi in search of folks that are against the British rule. Oliva lives in a palace where the girl is kept, NTR tries to make friendship with her so that he can enter the palace. 1920’s set up in Delhi is nice.

Both introduction scenes are complete. Ram Charan and JR NTR did well, NTR’s intro is slightly better than Ram charan’s

11.35 P.M: JR NTR as Akthar goes to New Delhi to save the girl. NTR’s introduction is slightly better than Charan’s.

11.25 P.M: Charan is a police officer who works for the British.

11.10 P.M: Fans euphoria in theater is electrifying with fans shouting Jai RCT and Jai NTR. Movie is yet to start

Manual scavenging has been one of the most inhuman practices that is still prevalent in our society. Despite several measures and policies in place,...
Read more
Movie Reviews

Vishnu Vishal gained a good name for himself as a competent actor and producer, with films like Ratsasan and FIR. He even gained a...
Read more

Nandamuri Balakrishna’s Unstoppable 2 has been missing the star power as the ongoing season didn’t have a single star hero or a super interesting...
Read more