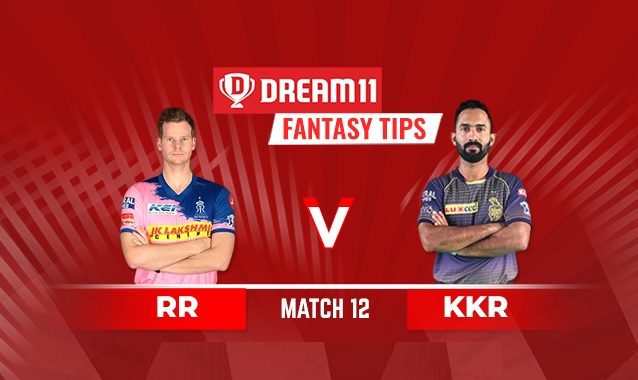 Steve Smith’s Rajasthan Royals will be taking on Dinesh Karthik’s Kolkata Knight Riders tonight in the IPL 2020. This is an interesting game to look forward to. There are power hitters and classy players on both sides. Thus, we give you a few suggestions to make a stable fantasy team.

The pitch in Dubai is favouring the spinners. The analysts predict that there will be a bit of turn on this pitch in this game as well. Thus, Narine will play a key role in this game.

Right now, Sanju Samson is the star player of this season. He gave stunning performances in the first two games and we expect him to do well in this match as well. Pick him up in your Dream11 team.

Another Rajasthan player who has put up a good show in the first two games. Smith fared extremely well as an opener and we think that he will play a crucial role in this match too.

Buttler failed to make an impact in the last match. However, we cannot ignore his brilliance. He can be deadly in the power play overs. Try picking him up if you have enough credits.

Morgan played a very good knock against Sunrisers in his last match. He will be a key player in KKR’s middle-order. You can buy him for fewer credits and it will be a safe pick in your Dream11 fantasy side.

Gill is a promising young Indian player who played a match-winning innings against SRH a few days back. KKR has high hopes for him and he will mostly live up to all the hype.

He was an unknown man a few days back. His blistering knock against Punjab made Tewatia a hero in no time. His craze and form makes him an interesting choice for your Dream11 fantasy team

Though Archer is yet to fire with the ball, he is giving some good cameos to Rajasthan with the bat. If he clicks with the bowling too, you will have plenty of points in your kitty.

This Karnataka spinner played a good game against SRH in the last match. He gave away only 25 runs and picked up a wicket in his four-over quota. As this is a spin-friendly pitch, Chakravarthy will have a crucial role to play.

He is the front-line spinner for Rajasthan. Due to the pitch conditions, we predict that Gopal will play an important role in this encounter. Pick him up and test your luck.

Here are the probable XI of both the teams:

Kings XI Punjab is continuing its fabulous form in this year of IPL. They now registered their fifth straight win in the tournament. The...
Read more
Sports

Rajasthan Royals pulled off an incredible chase in this year of IPL. They have successfully chased a target of 196 in 18.2 overs. By...
Read more

Rajamouli to work on Baahubali again

The Baahubali duology stands as one of the biggest ever creations in Indian cinema. SS Rajamouli crafted Baahubali 1 & 2 with cinematic excellence...
Read more
Movie News

Subsequent to a huge loss in the film industry due to COVID impact, makers planned to release films digitally over the last six months...
Read more
Movie News

Mumbai has once again proved to be a haven for drugs. The Bollywood film industry, already heavily criticized in the Sushant Singh case, is...
Read more
Movie News

Yesterday's 50th episode of Telugu Bigg Boss 4 happened like never before. It’s known that Nagarjuna went to Manali for the shooting of the...
Read more
Movie News

Suriya's upcoming film Aakaasam Nee Haddura is gearing up for its Amazon Prime premieres on November 12th. The trailer of the film was released...
Read more

The Andhra Pradesh government has been implementing rather stringent rules when it comes to the sale of liquor in the state, ever since the...
Read more
Political News

Another postponement of schools’ reopening in AP..?

It is known that AP CM YS Jagan Mohan Reddy has decided to reopen the schools which were closed due to the COVID pandemic...
Read more
Political News

Center gives another shock to Polavaram through RTI

The Central Government has been saying that it wouldn't fund the state government with the funds that were estimated for the Polavaram project in...
Read more
Political News

Why TRS helping BJP and Congress in Dubbaka Bypolls?

Telangana Rashtra Samithi (TRS) being led by K Chandra Sekhar Rao are the clear favourites in the Dubbaka Bypolls but they have their own...
Read more
Political News

Praveen Prakash is the Principal Secretary to Andhra Pradesh Chief Minister Jagan Mohan Reddy, at the Chief Minister's Office. He is also known to...
Read more

Kings XI Punjab is continuing its fabulous form in this year of IPL. They now registered their fifth straight win in the tournament. The...
Read more
Political News

The Andhra Pradesh government has been implementing rather stringent rules when it comes to the sale of liquor in the state, ever since the...
Read more
Movie News

Rajamouli to work on Baahubali again

The Baahubali duology stands as one of the biggest ever creations in Indian cinema. SS Rajamouli crafted Baahubali 1 & 2 with cinematic excellence...
Read more
Photo Gallery

Recent reports state that UK based drugmaker AstraZeneca's vaccine for battling the Covid-19 infection has generated a strong immune reaction in the old volunteers. A...
Read more