Romantic Movie Review: Only for some romance 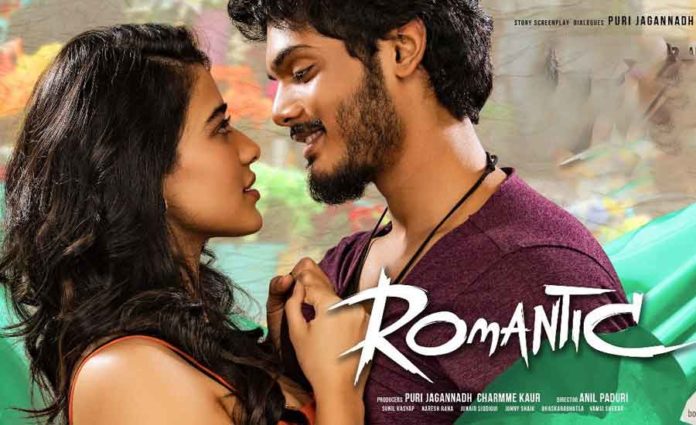 Puri Jagannadh’s Akash Puri’s second film, Romantic has generated decent buzz among the audience with its promotional stuff. Co-starring Delhi beauty Ketika Sharma, the film has hit the screens today. Let’s check how it is.

Set in Goa backdrop, Vasco da Gama (Akash Puri) does crimes to earn money for his grandma. For the same, Vasco Da Gama along with his childhood friend Annie join Goa’s notorious drug mafia gang. Eventually, Vasco gets grip on Goa underworld. In the process, Vasco falls for a young musician named Monica (Ketika Sharma). This is the time ACP Ramya( Ramya Krishna) enters the scene to nab the drug gang in Goa. Will Ramya’s team succeed in tracking Vasco Da Gama’s underworld drugs mafia? How will the relationship between the lead pair distrubed with the police focus on drug dealers in Goa? Forms the rest of the story.

Akash Puri has improved a lot in terms of acting and screen presence. His carried the film on his shoulders and pulled off the given role decently. Compared to his first film, Mehboob, Akash Puri showed good variance in the dialogue delivery.

Delhi girl Ketika Sharma is amazing with her screen presence. Her skin show in the songs will be a treat for the youth audience.

Ramya Krishna as a cop is alright. Her performance in the key second half proceedings is an added advantage for the movie.

Hero Ram made a cameo appearance in a special song in ‘Ustaad’ avatar which will be a treat to watch for his fans to watch.

Music composer Sunil Kashyap is one of the main plus of Romantic as he lifts the proceedings with his catchy and impactful songs and impactful background score.

Editing work is just okay.Cinematography is good as the beautiful location in Goa are captured nicely.

Production values for this limited budget movie are alright.

Anil Paduri did a decent job as the director as he presented this dark romantic drama with an appealing narration. Though the story and screenplay provided by Puri Jagannadh remains us of his previous films like Poriki and 143, Anil’s with his directorial skills executed Romantic in a decent manner.

In an overview, Romantic is a youthful dark romantic flick that has enough elements such as romance and good songs to attract the targetted youth audience. On the flip side, lack of novelty in the story and screenplay makes the film a dull watch for general audience.