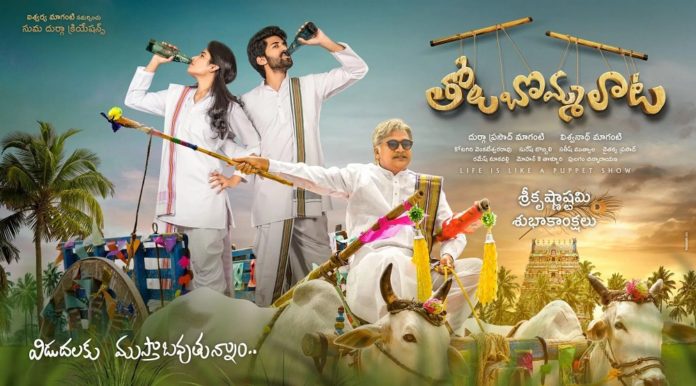 Rishi (Vishwanth)-Varsha (Harshitha Chowdary), grandchildren of Somaraju alias Sodala Raju (Rajendra Prasad) approach the latter, to get married. But Somaraju’s daughter and son will have some disturbances among thm. How did Somaraju clear all those and made his grandchildren get married is what forms the crux of Tholu Bommalata.

Rajendra Prasad is quite impressive in his old man’s get up. He delivered a suitable and subtle acting skills in the character. All the prominent roles in the film like Vishwanth, Vennela Kishore, Devi Prasad, Narra Sirnivas, Harshitha Chowdary came up with a brilliant performance.

Vennela Kishore’s part is entertaining and his scenes with Rajendra Prasad are evoke good laughs. A few montage scenes in the village background, reminds one of their childhood days. The makers picked a decent point, but failed to develop it as a story. While the film is expected to bet heavily on emotions, none of the such attempts have truly found a place in the heart.

Especially, in the pre climax, when the film is anticipated to take an end, it further extends, revealing a new emotional part. But the scene lacks any strength and so falls flat. So the main point in the family entertainers, which is emotion, has failed to connect to the audience, thus being a huge minus point of Tholu Bommalata.

The narration is slow and quite predictable. The director failed to generate any engaging happenings on the screen, except for a few comedy bits in parts. Even the dialogues are weak. Debutante Vishwanath Maganti has completely failed in every aspect of making a film.

Though the editor trimmed many scenes, they still appear boring. Several tracks happen, just because, they should happen and does not serve any purpose. Especially the love track between the lead pair for such heavy length is unnecessary.

Coming to the plus points, Sathish Muthyala’s cinematography is good. He captured the beauty of the village well. Suresh Bobbili’s music and background music is impressive. Production designing is rich. Mohan K Talluri’s art work is brilliant.

Except for a basic story line, Tholu Bommalata fails to make an impact in any other aspect. Though the performances of all the lead actors is impressive, the lack of strength in narration and screenplay, makes their effort useless. The hardcore lovers of the family entertainers, who is not concerned about anything else, other than the family atmosphere in the film, can pick the film for this weekend.

After the debacle of Sahoo, Young Rebel Star Prabhas took a long break to begin shoot of his next film (Prabhas 20), which is...
Read more
Movie News

Just a couple of days back, in one of his media interactions, Super Star Mahesh Babu stated that he will not act in Bollywood...
Read more
Movie News

These are the days where the filmmakers are showcasing interest to come up with remix songs. A few old hit songs have been remixed,...
Read more