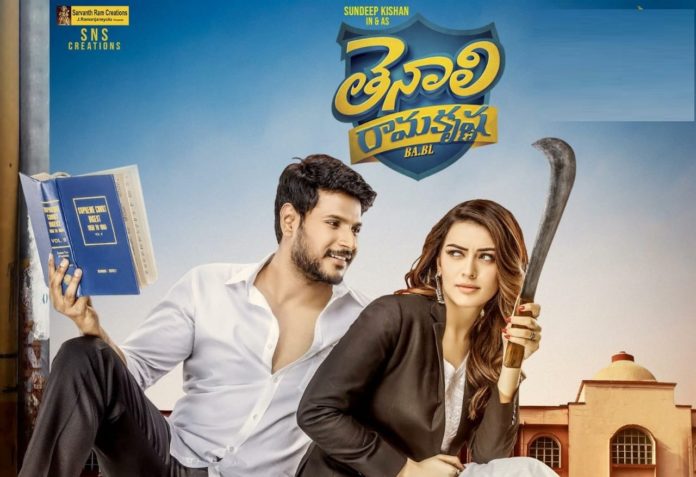 Tenali Ramakrishna (Sundeep Kishan) is an idle lawyer, with no cases in the hands. He tries to earn money by compromising the issues between people, who are involved in the pending cases. On the other side, Varalakshmi (Varalakshmi Sharath Kumar) finds herself in a murder case and Tenali takes it up. The consequences, he faced after taking up the case is what shows the rest of Tenali Ramakrishna BABL.

Sundeep Kishan has nothing new to offer. He came up with his regular kind of acting style. Even Sundeep Kishan tried to reveal his dancing skills well through the film. Hansika’s character has no great importance and even her looks are not much attractive in the film.

Varalakshmi Sharath Kumar has been already popular for playing negative characters in Kollywood. She proved her mettle one more time in Tenali Ramakrishna BABL too, by showcasing a brilliant performance. Her character could have been written bit more well, to bring up more performance from the actress.

Tenali Ramakrishna BABL, which is anticipated to be high on entertainment, is surprisingly disappointing. The comedy worked out only in parts.

The makers tried to create fun with repeated rhyming words. Even in the scenes, where the rhyming is not at all required, the makers continued to do it and thus spoiled the mood. The dialogues are weak. Even the editing is dull, as there are several scenes which could have trimmed to appear it better.

Adding to it, a few of the popular episodes like Jagan’s Kodi Katthi, Venky Aasan in F2, Balayya dialogues have been used in the film only to take irritation to the next level. Chammak Chandra’s comedy episode, on the similar lines of Jabardasth, appears vulgar. The interval block and climax lack any excitement.

The story is extremely weak and is deadly routine. Even the screenplay is totally predictable. Be it comedy, emotional, action or any other aspect, the director Nageshwara Reddy terribly failed in capturing the emotions.

Coming to plus points, the episode where the actress Satya Krishnan imitates KA Paul is the major highlight of the entire film. Even Saptagiri’s comedy is just okay. A few of the twists in the second half are decent.

Both background score and songs are good to hear and watch on the screen.. All the songs have been shot well. The visuals are great.

During the promotions, the makers promised that Tenali Ramakrishna would be a thorough laughing riot. But not more than 15-20 minutes, one would giggle at the scenes. In an attempt to prove himself an action hero once again, Sundeep Kishan has registered another dud in his career.

Even though the story is dull, the director could have shaped it well, if he had picked a good screenplay. But the weak narration, makes the already existing boring story, even more boring.

Finally, the legendary poet Tenali Ramakrishna is a great scholar and adviser. When such reputed name has been picked as the title, one would expect that even the hero’s character will be molded with the qualities of the poet. Even the director tried to showcase Sundeep Kishan in the similar manner, but the only problem that he could not do it in an effective manner.

Finally: Tenali Ramakrishna BABL- Not a laughing riot, but a nightmare.

A few hours ago, an on-location snap of Chiranjeevi and Ram Charan from the sets of Acharya surfaced on social media and they are...
Read more
Movie News

A few hours ago, an on-location snap of Chiranjeevi and Ram Charan from the sets of Acharya surfaced on social media and they are...
Read more
Movie News

It is known that the Telugu remake of Drishyam 2, starring Venkatesh was officially launched a week or so ago. The unit commenced regular...
Read more

MLA Balakrishna is touring extensively as part of the Hindupuram Municipality election campaign. The video in which Balakrishna is seen slapping his fan went...
Read more
Political News

Both KCR and KTR left BJP in dilemma!!

Y Srilakshmi will be the next CS of AP??

The incumbent Chief Secretary of AP, Adhithyanath Das retires in June 2021. Against this backdrop, Jagan started his search for the next AP CS....
Read more
Political News

Recently, the YSRCP chief YS Jagan Mohan Reddy has received a complaint from some of the YCP leaders against YSRCP MLA from Chandragiri, Chevireddy...
Read more

A few hours ago, an on-location snap of Chiranjeevi and Ram Charan from the sets of Acharya surfaced on social media and they are...
Read more
Photo Gallery