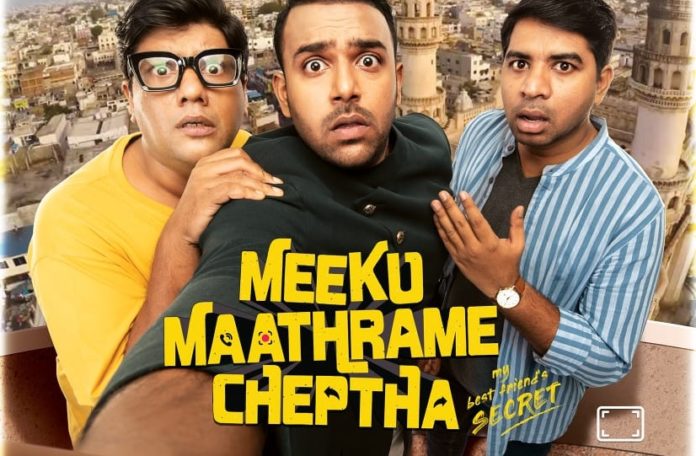 Rakesh (Tarun Bhascker) and Kamesh (Abhinav) are good friends. Rakesh lands in trouble when one of his private video gets leaked on the internet, one day. As he is about to get married in the next three days, Rakesh attempts to get the video deleted. What are the consequences he faced during such attempts and did he succeed in the end? Watch Meeku Maathrame Chepta know the answers for it.

Tharun Bhascker as an actor nailed his performance. His constant tension on the face throughout the film is the major thing that makes him stand out. Abhinav’s character evokes good laughs in intervals. His one-liners are impressive. Rest other roles like Anasuya, Vani Bhojan, Pavani Gangi Reddy are okay.

Dialogues by Shammeer Sultan and Tharun Bhascker, especially the one-liners are impressive. Cinematography is good and the background score elevated a few of the dull scenes well.

The movie starts on a very slow note and picks up after 15 minutes and later drops again. The interval block is uninteresting. Even the second half lacks pace and gets dragged till the climax with no great scenes. The climax twist is good.

A few scenes like the Rambha theatre dialogue in the cafe, scenes related to girlfriends and a few other moments are funny. But, rest other fun tracks are unimpressive. A simple story that can be made as a short film, is considered for a feature film and has been dragged to make it to two-hour length.

Meeku Maathrame Chepta is based on a Hollywood film called, “The Road Trip”. While the original deals with a videotape, suiting to the trend it released in the year, the Telugu film revolves around a leaked video, as per the current trend. The original has good comic elements, but the makers failed to adopt the fun in the Telugu attempt.

Director Shammeer Sultan tried to make the film as a slapstick comedy, but his attempt failed, as neither story, nor screenplay is gripping. But the director should be appreciated for handling a few sensibilities well, through the comedy, without making it appear vulgar.

The production values are good and the editing should have been better, as there are several unnecessary scenes that deserve a fine trimming. Except climax, no other twist has been worked out in the film.

The entire story revolves around a leaked video. The fun generated while attempting to get the video deleted is good in parts. Though the first half is okay, the second half lacks any strength in the story.

The multiplex audiences may connect to the film to some extent, but ‘C’ centers would not bear it. Tharun Bhascker acting and Shammeer Sultan’s dialogues may get a good focus through the film. No other technician could pull any major benefit from it. More than the slow-paced film, the trailer is good, as it not only has a good pace but also almost everything, the film is about.