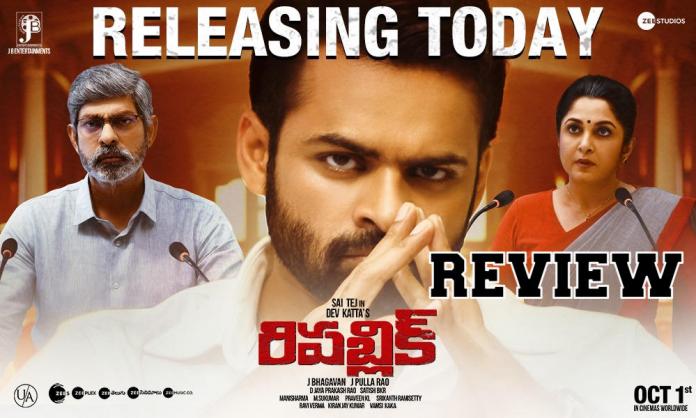 Story: Panja Abhiram(Sai Dharam Tej) is a bright student. He then turns an IAS officer after coming to know about the plight of those around him, and also that of the society, as a whole. In his attempt to serve the public, Abhiram comes up against a crooked politician (Ramya Krishna), who does all she can to stop him in his tracks. What follows is an intense clash between the feudalistic political system and a straightforward bureaucrat. Can the latter win in his fight to eradicate corruption?

What About On-screen performances?

There is a great deal of emotional connect associated to Sai Dharam Tej, especially so, given the fact that he met with an accident recently and is currently recovering from the injuries. Coming to his performance in the film, he delivers a spotless performance. This is the first time he is playing a bureaucrat on screen and he manages to ace it. Ramya Krishna is at her usual best as she plays a crooked politician. Her menacing demeanor and screen presence add zest to the antagonist character. Aishwarya Rajesh, Rahul Ramakrishna, and Jagapathi Babu play brief yet highly impactful characters. The casting is bang on.

What About Off-screen talents?

Deva Katta showcased his talent in handling sensitive sociopolitical subjects with his debut film Prasthanam and he treads a familiar territory with Republic now. He picks a socially relevant political subject and narrates it with convict without any deviations. The film is essentially a political drama that highlights the contemporary clash between the political system and the bureaucracy. Deva does the right thing by not infusing any comedy or commercial scenes just for the sake of it. This helps the film in staying true to its theme.  The way he conceives and handles the deep and hard-hitting climax is touching.

The background score is particularly good in a few penultimate episodes. The songs are adequate. The cinematography is top notch.

Verdict: Republic is an honest sociopolitical drama that has its heart at the right place. Sai Dharam Tej’s spotless performance paired with Deva Katta’s sincere approach delivers an engaging and relevant film. With no deviations along the way, Republic makes for a compelling watch.

09.30 PM Jagapathibabu tells his story why he became like corrupted officer and what he lost as an honest officer. Good performance by Jagapathi babu. Intense climax scenes in courtroom. Movie ends with a heavy climax.

09.10 PM  SDT confrontation scenes with Ramya Krishna are really good. She users her tactics and makes SDT suspended. Ramya Krishna dialogues with SDT after this incident on contemporary politics were well written and well said.

8:50 PM Aishwarya gets raped by goons as she is trying to find out why his brother got killed. He is a doctor who knows that Ramya Krishna’s fisheries are producing poisonous fish. SDT suspends his father since he has not taken any action despite knowing the facts.

8:30 PM Sai Dharam Tej makes Police kill a goon who belongs to Ramya Krishna’s political Party, pre interval scene. A good first half so far, winner on cards for Sai Dharam Tej and Dev katta if the later half has gripping content.

8:20 PM Sai Dharam Tej becomes an IAS officer for Krishna District with special powers that he can not be transferred. Ramya Krishna does not like it. SDT reopens a land grabbing case, good scene in police station with Sirikanth Iyengar as SI.

7:40 PM Jagapathi Babu is not an honest government officer, which SDT doesn’t like much. He gets into fight with a political party due to rigging. Collector Subbaraju warns him and controls him. SDT decides to become an IAS officer dumping his plans to go to US.

7:20 PM – Movie Starts with Sai Dharam Tej introduction. He gets introduced as smart and intelligent kid. Aamani and Jagapathi Babu as his parents.

In early July this year, Union Minister of Law and Justice, Kiren Rijiju, clarified that the centre has nothing to do or say with...
Read more