Nithiin’s Rang De Movie Review – Could have been more colorful 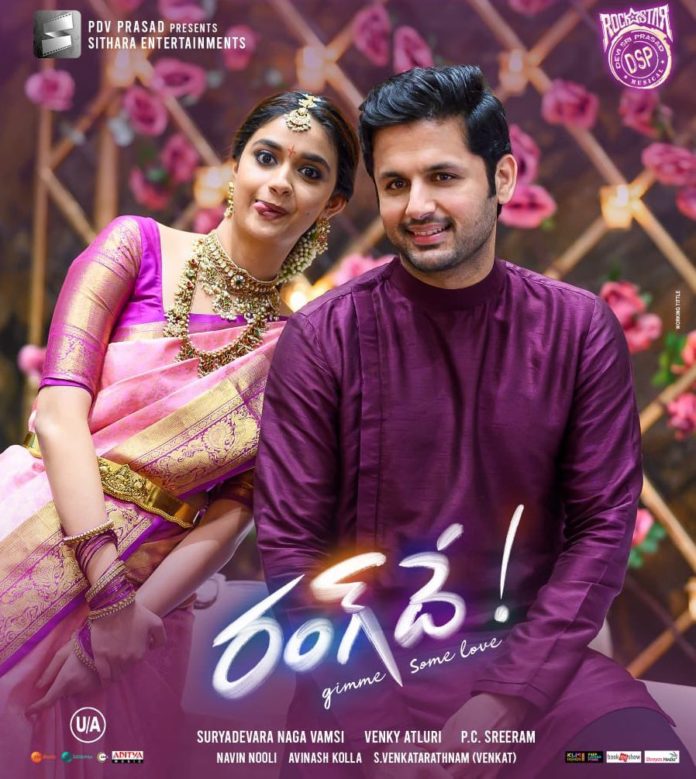 Rang De stars Nithiin and Keerthy Suresh in the lead roles. The trailer suggested that the cat and mouse fight between the lead pair is the focal point of the film. Let us see what is has to offer.

Arjun(Nithiin) and Anu(Keerthy) know each other right from childhood days and they keep quarreling for literally everything. But the duo is forced to get married after they grow up following Anu’s daring and bold act. Will they keep quarreling even after marriage? What is the reason behind their forced marriage?

Nithiin looks stylish and handsome in a tailor-made role. His funny antics and dialogue modulation breathe life into the role he plays. He did pretty well in the emotional scenes as well. Keerthy plays a playful diva and she nails it. Emotional scenes are her forte and she proves the same with Rang De as well. She excelled in the emotional blocks in the second half. The film has an ensemble star cast including Naresh, Rohini, Suhas, Abhinav, Vennela Kishore etc and they deliver what is expected of them.

Renowned cinematographer PC Sreeram is a class act and his brilliant work behind the lens is commendable. His visual presentation is of top-notch quality.  Devi Sri Prasad’s work is subpar. Barring a couple of songs in the second half, the rest of the songs are just okayish and so is the background music.

Venky Atluri picks another love story for his third film and he tries to narrate it with a good dose of emotions. But the Tom and Jerry style fight between the lead pair and a subsequent love track is a beaten to death template in Tollywood. So, there is very little freshness as far as the story is concerned. A few scenes are entertaining but the rest fall flat and that takes a toll on the tempo of the film. The emotional track between the lead pair is poorly written. Dialogues and one-liners are good here and there.

Rang De has a sparingly entertaining first half but the predictable story and slow narration bring down the tempo of the film. Consequently, many scenes look stretched out and the viewers can easily guess what is about to happen next. The emotional connect which seemed to be quintessential for this film is not up to the mark. The film fails to keep the viewers engaged all the way through.

Watch or Not?: If you are okay with a routine story which only has a few comedy scenes going its way, then you might give it a try.

06:15 AM: Nitiin succumbs to family pressure and gets hitched to Keerthi and they both leave to Dubai for MBA.. Keerthi’s leg pulling continues.

05:50 AM: Rang De’s first half is all about ego clashes between the lead pair and heroine developing interest towards the hero in the process. Movie fate depends on 2nd half proceedings

05:00 AM: Movie starts off with Arjun and Anu Childhood rivalry.

04:45 AM: Rang De show time with Anu and Arjun (Nithiin and Keerthy Suresh) childhood rivalry. Arjun prepares for GMAT exam to do MBA.

Rang De, starring Nithiin and Keerthy Suresh in the lead roles, is all set to hit the screens on March 26. Directed by Venky Atluri, the director who helmed romantic films like Tholiprema and Mr Majnu, has created a good hype among the audience. Music by Devi Sri Prasad has created lot of positive buzz for Rang De.

Nithiin, who received a box office hit with Bheeshma before the lockdown in 2020, has made an experimental film with Chandrasekhar Yeleti. Despite the critical acclaim of the film Check, the collections did not reach the expections at the box office. And now, the young actor wants to get back on the success track with Rang De.

Watch this space for Live updates from US premier shows shortly followed by full movie Review.