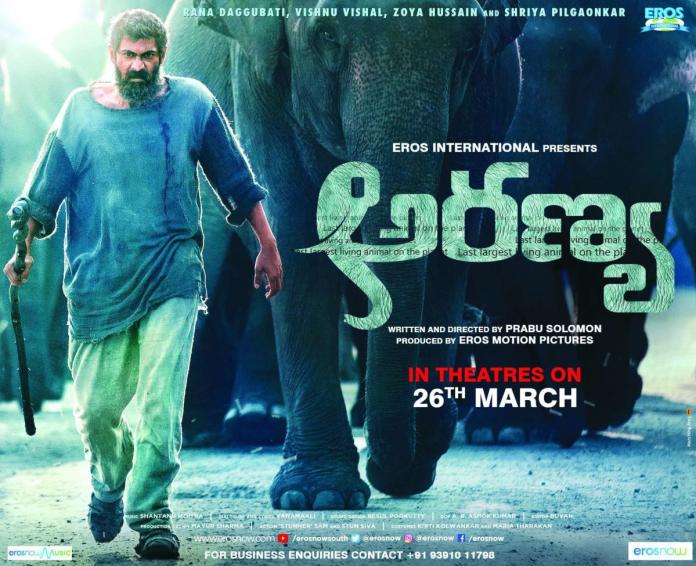 Aranya is based on the life story of Jadav Payeng, famously knowing as the forest man of India. The film was shot in multiple languages and the Telugu and Tamil versions are hitting the big screens today. Let us see its merits and demerits.

Forest department minister, Rajagopalam(Anant Mahadev) plans to build a smart city in a 60-acre extent which is located in the middle of a dense forest. This area is a passage way for wild elephants and human interference can greatly affect the existence of the species in the locality. Aranya(Rana) who is a native of the area lodges a battle against the government, opposing the construction of the city. Will he be successful?

Rana has donned a completely new getup in the film and he aces it. He steals the show with his peculiar mannerisms and body language. He has matured a lot as an actor. Vishnu Vishal is decent. Sriya Pilgaonkar comes up with a fine performance. Raghu Babu tickles the funny bones here and there with his quirky dialogues. Antagonists Ravi Kale and Anant Mahadev look menacing and they fit the roles.

Visuals and music are the cornerstone of the film. Most of the film is shot in real-life locations and the beauty of the same is captured and presented beautifully. CGI is patchy though. Award winning sound engineer Resul Pookkutty is a hero behind the lens with his brilliant work.

The director Prabhu Solomon picked a plot based on real-life incidents and it does have a very good premise. But stories like these need a deep emotional connect and Aranya seriously lacks the same. The second half seems rushed and there is no engagement quotient whatsoever. The character arcs are flawed and so is the narrative in penultimate scenes. Quite a few scenes are illogical and that acts against the cause.

Aranya has a very good premise and would have shaped up very well if it had an engaging and emotionally touching screenplay. But sadly, Prabhu Solomon failed to deliver on this front. The film gets off to the right start but loses steam soon after. As a whole, the film does not pack a punch and ends up as an underwhelming watch.

Watch or Not?: Sadly NO.