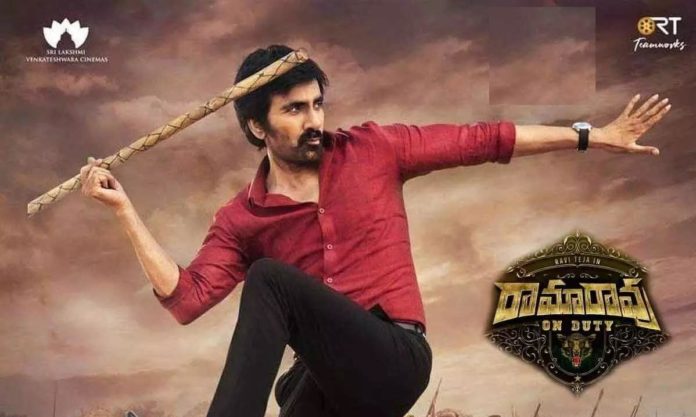 Ravi Teja’s Ramarao On Duty hit the theaters today. The film is promoted as an action thriller with suspense elements. Let’s see what it has to offer.

Story: Ramarao is a deputy collector at Srikakulam and he later gets demoted as an MRO and is stationed at his hometown. He then comes to know that there is a series of kidnaps going on here, including that of his ex-lover, Rajisha Vijayan’s husband. He realizes only those involved with red sandalwood smuggling trade are getting kidnapped. How does an MRO track and trace those involved with the kidnappings? What sort of action does he take on it? Will he be able to nab the culprits?

Ravi Teja had to mellow down his usually animated mannerisms for this role of an MRO. He looks alright in the subtle role and delivers an earnest performance. His trademark electrifying body language goes missing though.

The director Sarat Mandava takes a mass commercial hero like Ravi Teja and sets out to do a thriller with suspense elements. He tries his hand at this hybrid genre and fails to excel in both. Ravi Teja’s subdued character design, lack of entertainment, paired with slow and uneven screenplay make this film a damp squib. The kidnappings track and hero-villain conflict point hold the key and they aren’t executed properly.

The music director Sam CS does a fairly decent job with the background score. He elevates a few scenes with his high tone music score. But the poorly placed songs tamper the flow of the proceedings though. The editing should’ve been way better as there is way too much lag in either halves. Thrillers need crisp and packed screenplay but RamaRao On Duty fails on this front, making it a below par watch.

Verdict: RamaRao On Duty is promoted as an actioner with thriller elements, but it fails on both counts. There is no enthralling action or edge-of-the-seat thriller elements. Ravi Teja’s character isn’t tailor-made for him either. This film is caught in the in between and ends up disappointing both Ravi Teja’s fans and also common audience.

Ramarao on Duty is an action thriller film written and directed by Sarath Mandava. Produced by SLV Cinemas and RT Team Works, it stars Ravi Teja in the titular role alongside Divyansha Kaushik, Rajisha Vijayan, and Venu Thottempudi.

Final Report: Overall, Movie is below par. Unnecessary lag and filler scenes along with already missing (due to the genre of the film) ravi teja’s mark entertainment will make it a difficult watch for both regular cine-goers and fans

08.00 A.M: Mystery gets solved, RamaRao finds the king pin but doesn’t have evidence against him

07.25 A.M: Investigation continues in the second half. Nenena nenena song is a good melody but disturbs the flow of the movie

First Half Report: RamaRao on Duty has a story that feels flat. Ravi Teja plays a subtle role. Venu Tottempoodi’s come-back act fails to create an impact. The later part of the movie becomes crucial to deliver.

07:00 A.M: Pre Interval block has a fight and has a surprise element.

06:55 A.M: Rama Rao finds that there are other 20 people missing from the same village and links to red sandalwood smuggling

06:47 A.M: RamaRao vows to take help Malini and starts his own investigation to find where is Surendra (Malini’s husband)

06:40 A.M: Bhul Bhul song is okay, visually does not have much to offer. Malini gets married to his father’s Partner’s son without RamaRao’s knowledge

06:00 A.M: Movie opens in Sri Kakulam Sub collector office, Rama Rao introduction scene. He is an honest officer but doesn’t care much about rules, he has his own ways.