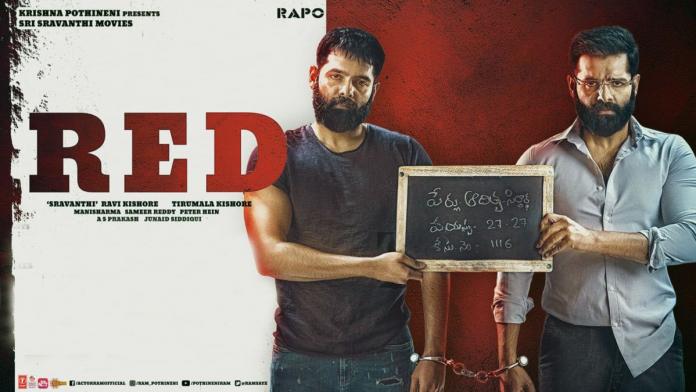 Ram’s Red was initially slated for release last summer but the onset of Covid-19 pandemic resulted in a lengthy postponement of the release. The film finally hit the screens today and here is what we felt after watching it.

Story: Siddharth and Aditya(Both played by Ram) are identical twins who share an uncanny resemblance and also a troubled past. But their lifestyles are completely contrasting. While the former is a well-mannered civil engineer, the latter is a rogue who is always in search of easy money. However, the proceedings take a steep turn after Siddharth is accused of murdering a man. Police officers, Nivetha Pethuraj, and Sampath start investigating the case and as they keep interrogating Siddharth, things get even more complicated as Aditya enters the scene. Who is the real culprit behind the murder? How is the murder linked with Siddharth’s love life and his girlfriend Malvika Sharma, who went missing a while back? Why does Aditya voluntarily enter the scene? The answers to these questions form the rest of the plot.

Ram plays dual role in the film and he delivers a fine performance. He manages to show good variation between the two characters when in comes to mannerisms and body language. He is the main driving force behind the film. Of the three female leads, Nivetha Pethuraj, Malvika Sharma, and Amritha Aiyer, the former gets the meatier role as she plays a police officer and she does a decent job. Malvika and Amritha are seen in brief roles and they deliver what is expected of them. Sampath is shown as a cop who has a personal feud with one of the male leads and he suits the role.

Red is the remake of Tamil suspense thriller Thadam which was applauded for its thrilling screenplay and brisk narration. But sadly, the Ram starrer fails to acquire the above-mentioned key traits of Thadam and it ends up as a bland and boring film with zero thrills. The director, Kishore Tirumala had only directed love dramas till now and he treaded unfamiliar territory with Red, which is supposedly a suspense thriller. Suspense thrillers thrive on pacy narrative and unexpected twists, but Red possesses neither of them. The director looked clueless for most parts as he did not know how to take the story forward. Majority of the first half is dedicated for character establishment and that takes a toll on the tempo. Barring the pre-interval sequence and interval twist, no aspect of the first half is intriguing. The second half starts on a dull note as well and it fails to hold the attention of the audience. There is a small and typical twist towards the end of the film and it just isn’t enough to end the film on a high.

The music director Mani Sharma did an okayish job with the audio album. Dinchak Dinchak song which comes in the early stages of the first half is the pick of the lot. His background score is decent. Sameer Reddy’s work behind the lens is good. Editing is way below par as a big chunk of the final cut could have been chopped off to maintain the optimal run-time. Production values are of top quality.

Verdict: To put it in simple terms, Red is a poorly executed film which was promoted as a suspense thriller. It neither evokes suspense nor has any thrilling elements. The film drags on and on and on with unnecessary sub tracks which do not gel with the narrative. Ram delivers a fine performance in dual role and that could very well be the only positive aspect of the film.

Watch or not: Strictly for Ram’s fans who have been waiting for a long time to watch his film in theatres, the rest can give it a skip.

RED directed By Kishore Thirumala and produced by Sravanthi Ravi Kishore under Sravanthi Movies banner is a remake of Tamil movie Thadam and it is a romantic action thriller. The movie cast includes Ram, Malavika, Nivetha Pethuraj while Mani Sharma scored music after a long break.

Watch this space as TeluguBulletin gives live updates from US premier shows and a Movie Review.

08.45 A.M: Rest of the story is about how police solves the mystery. Movie ends with a twist. Watch this Space for Full Review

08.20 A.M: Siddarth alleges that Aditya has manipulated so that case goes against him. Sampath also tries to get Siddarth convicted. Court releases both since there is no evidence.

08.10 A.M: Police is not able to crack the case, Sampath calls for Posani’s help. Aditya and Siddartha tells their parents story to police, their mom and dad gets divorces. Siddartha lives with his dad and Aditya with his mother. Aditya’s mother is a gambling addict, who commits suicide. Siddartha join Engineering, Aditya joins law. Siddartha becomes well settled in his life, Aditya gets jealous of Siddartha.

07.45 A.M: Sampath gets two days to solve the mystery case, Posani Krishna Murali is his friend as procesutor. Police tries to find out what is the background of Akash and why he gets killed. Narra’s comedy is good. Nivetha Tries to find out why there is a rivalry between Sampath and Siddarth (Ram)

Nothing exciting except the suspense of who killed Akash. Not much progress within the story, Director took a lot of time to establish characters. Dinchink song is a good mass number for Ram, his dances are energetic. Interval bang is pretty bland, let’s wait and see how the later half goes.

07.35 A.M: Aditya also gets arrested in a drunken drive case and police brings him to the same police station. Police gets confused after seeing second Ram. Comedy scenes did not work out. Very bland interval bang, nothing exciting except the suspense of who killed Akash.

07.25 A.M: Police investigation gets started; they ask Siddarth why he killed Akash (guy who gets killed). Siddarth says he has old rivalry with Police officer (Sampath ) and sites that as a reason for his arrest.

07.20 A.M: Nivetha (Yamini) finds that Siddarth (Ram)is the one who killed that guy using a selfie pic evidence, Siddarth gets arrested.

07.10 A.M: Satya and Aditya (Ram) get pressed to pay back money and warns them that if they don’t pay money he will kill Satya. Aditya gets desperate for money. Amirtha Iyer likes Aditya, he asks for money he needs and she obliges.

07.00 A.M: 45 mins into the movie, nothing great about it so far. Story has not progressed much, director established all the characters. Nuvve Nuvve song shot in beautiful Italy locations, the song is between Siddarth (Ram) and Mahima (Malavika). Nice melody but reminds of an old tune.

06.50 A.M: Aditya is addicted to gambling, he looses 8 lakhs in one night. He and Satya get a warning from goons to repay full amount in a week.

06.45 A.M: Satya plays Aditya’s friend character. Comedy did not work out much in initial scenes. Aditya gets him out of court case.

06.15 A.M: Movie started with Ram and Malavika Sharma both introduced as working in MNC. Ram tries to impress her.

A false affidavit, which he had filed in Jodhpur session court in 2003, has haunted Salman Khan like a shadow all these years. The...
Read more

A false affidavit, which he had filed in Jodhpur session court in 2003, has haunted Salman Khan like a shadow all these years. The...
Read more
Movie Reviews

Manchu Vishnu's much-anticipated film 'Mosagallu' has been making the right noise ever since it was announced. With the recent release of the movie teaser,...
Read more

It is known that TDP MLA Ganta Srinivasa Rao had submitted his resignation on February 6 (Saturday) opposing the privatization of Vizag Steel Plant. However,...
Read more
Political News

CPI national secretary Narayana has directed TDP and YSRCP leaders to bring Chandrababu Naidu and Jagan on the same platform in the movement to...
Read more
Political News

Kodali Nani is one minister is most famously known for making derogatory and downright offensive remarks against his opponents, and every opposing member of...
Read more
Political News

Chandrababu has written letters to the President and the Union Home Minister!

TDP chief Chandrababu flagged off that YCP leaders were committing irregularities and atrocities in the panchayat elections. He has written letters to the President,...
Read more
Political News

The state government has agreed to hold district and Mandal council elections as well as municipal elections in the state. It gave written consent...
Read more

It is known that TDP MLA Ganta Srinivasa Rao had submitted his resignation on February 6 (Saturday) opposing the privatization of Vizag Steel Plant. However,...
Read more
Movie News

CPI national secretary Narayana has directed TDP and YSRCP leaders to bring Chandrababu Naidu and Jagan on the same platform in the movement to...
Read more
Uncategorized