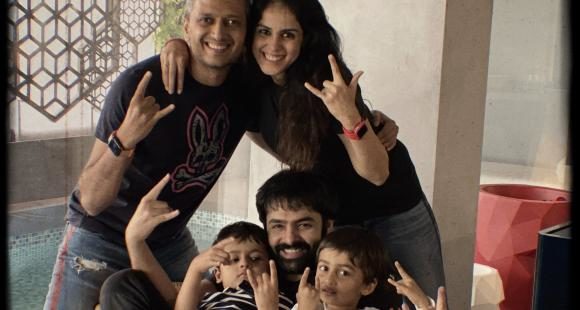 Genelia D’Souza, who needs no introduction to the Telugu audience, is celebrating her 38th birthday today. As she turned a year older, her friends, colleagues and fans took to social media platforms to wish the star diva on her special day.

Ram Pothineni, who is the best friend of the Bommarillu actress, now penned a cute birthday note for her.

Sharing a throwback picture of him along with Genelia, her husband Ritesh Deshmukh and children, Ram wrote, “Geeeennnuuuu!! Happppyyyyyy Birthdayyyyy! Let’s party before your college reopens again ;p …stay the same blessed soul that you’ve always been my sweetest ..sending you lotsa [email protected]#RAPO.”

For the unversed, Ram and Genelia played the lead roles in Srinu Vaitla’s 2008 hit film ‘Ready’. Since then, the bond between the duo grew stronger, and they became thick friends.

Meanwhile, on the work front, Genelia D’Souza is making her Telugu comeback with Gali Janardhan Reddy’s son Kireeti’s bilingual movie, which is directed by Radha Krishna.