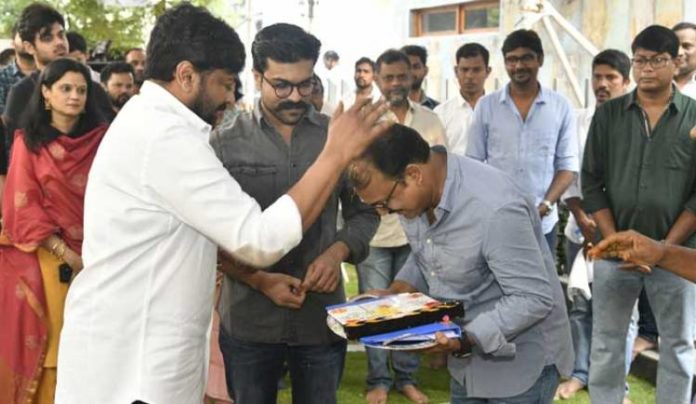 Megastar Chiranjeevi and Koratala Siva’s project was officially launched on the auspicious occasion of Dussehra, 2019. Speaking with the media, Chiranjeevi hinted that he would act with his son Ram Charan.

This has doubled the curiosity levels and mega fans are eagerly waiting to know more details about the father-son collaboration.

Here we bring you the exclusive details of Ram Charan’s role in this movie. We have heard that Ram Charan will play an important role in Chiranjeevi and Koratala Siva’s film.

Cherry will reportedly join the shoot from April and he has reportedly locked dates for nearly 40 days to shoot his portions.

Recently, this film shooting was started Kokapet in Chiranjeevi’s farmhouse in a specially- erected large house set. The second schedule is expected to be shot in Rajahmundry soon.

To be jointly produced by Konidela Production Company and Matinee Entertainments, the yet-untitled project will have Chiru in a never-seen-before role.

The Sye Raa star will be seen playing the role of an employee of the endowments department. Sizzling actress Trisha is being considered as the female lead alongside Chiranjeevi.