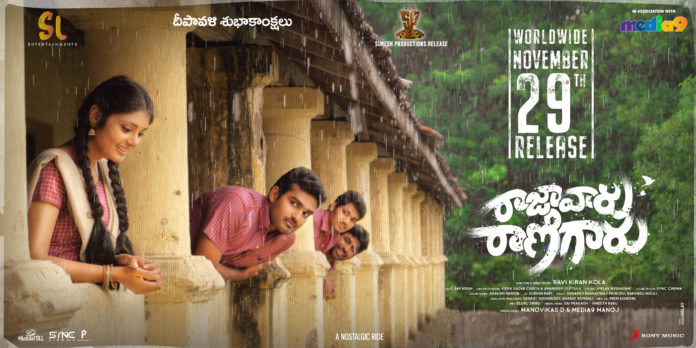 Raja (Kiran Abbavaram) falls in love with Rani (Rahasya Gorak) and finds it tough to propose her. His friends lend him all kinds of support to make sure that he proposes the girl. What are the attempts his friends made and how did hero take advantage out of it? Watch the film to know the answers to the questions.

Heroine Rahasya Gorak has a limited role to play in the film. As there are very less dialogues to the actress, her performance is just decent in the role she was offered. Kiran Abbavaram, though being a debutante has come up with some stupendous performance in the film.

Rajkumar Kasireddy and Yazurved Gurram, who played the roles of Chowdary and Naidu respectively deserves a special mention. Their instant free style of fun making is a must watch. It evokes good laughs in the theatres. Especially Rajkumar Kasireddy has a long way to go in Telugu Film Industry. Keeping aside the lead or prominent roles, all the actors of Raja Vaaru Rani Gaaru would get a good life in the film industry, as each of them appear promising.

The only aim of the hero is to propose heroine, which is what projected throughout the film. As the line is very thin, the director tried to play around the bush with some visually beautiful scenes.

Especially, Godavari’s beauty has been captured very well in the film. All credits go to Cinematographer. He tried to show his mark in several scenes. Especially an edit-cut of a sad song, shows the technical brilliance. Several scenes in the film remind one of the Malayalam Premam movie. It seems, the makers bought an inspiration from the same and thus tried to add a breezy feel to it.

A thin thread line that can mostly be used for a short film, has been considered for a feature film. So it can be considered as a notable drawback. But the director succeeded in projecting the story with loads of entertainment and other stuff. So, there is no red mark to his directional skills. But it could have been better, if he would have considered showing the emotions from heroine side too. The same point disconnects the audience with the crux.

Music elevates most of the scenes well and even editing is decent. But as the story line is thin, the second half of the film appears too slow and boring. Dialogues are good. Especially the emotional ones and even most of the one liners work out very well.

The key highlights of the film are condom episode that evokes good laughs, proposing scene of the lead couple, Chowdary’s character played by Rajkumar Kasireddy, the way hero’s friends manipulate the heroine’s father and finally taking a girl into the bushes. All the above mentioned scenes in the film deserve a loud appraise.

As mentioned before, the makers of Raja Vaaru Rani Gaaru considered a thin line for the story and concentrated on building up the scenes for the same. While the fun part works well with the contribution of Rajkumar Kasireddy and Yazurved Gurram, it is the other emotions, that lack any strength. Especially, the complete second half is dead slow.

But it is after very long that a film is so breezy and evoked some good feel throughout. The one who is not concerned about the story, but prefers such feel can pick the film in the theaters. The film is still one time watchable for those who is willing to catch up some clean love story in a village backdrop.