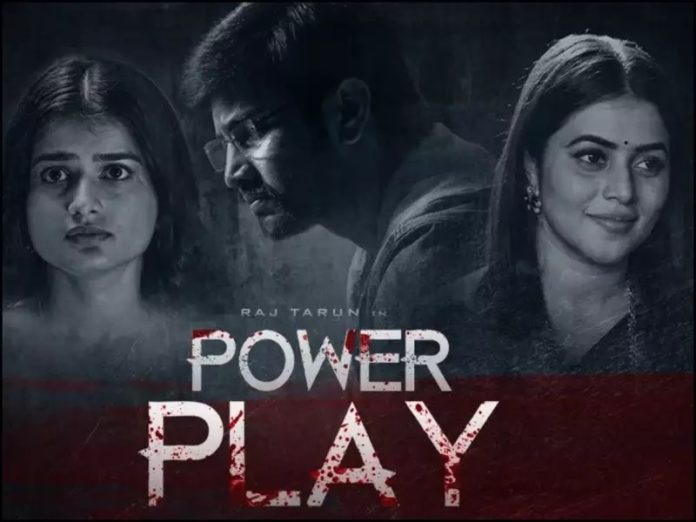 Raj Tharun is in desperate need of box office success as all of his recent films turned out to be duds at the ticket counters and for the first time in his career, he starred in a content-driven film. Titled Power Play the supposed suspense thriller released today. Here’s our review of the film.

Story: Vijay (Raj Tharun) is accused of stealing currency notes from ATM and replacing them with counterfeit notes. He is arrested by the police. The only way he can prove his legality is by presenting the CCTV footage from a camera placed in a mechanic shop adjacent to the ATM. But there is a lock here. The mechanic shop owner doesn’t agree to provide him with the CCTV footage and in turn he blackmails the daughter of chief minister with it. The remaining story deals with the link between these independent tracks.

How about on-screen performance?

Raj Tharun played a challenging role in the film and succeeded in carrying the right intensity with his mannerisms and facial expressions. Poorna as chief minister’s daughter comes up with a good performance. Hemal looks cute and she is a decent performer. Kota Srinivasa Rao, Raja Ravindra, and Ajay play supporting roles and they deliver what is expected of them.

The story penned by Nandyala Ravi is substandard. It takes pacy narration and thrilling sequences to present a story like this but sadly for Power Play, it possesses neither. The film is bland as it can get and has absolutely zero mention-worthy scenes. The screenplay is clumsy and the core plot is not gripping enough. The director Vijay Kumar Konda who had only worked on rom-coms up until now has tried his hand at suspense thrillers and it backfires big time. He fails to blend two parallel subplots and dishes out an uninteresting tale that has no driving force.

The cinematographer Andrew creates the right mood with his good work behind the lens. Suresh Bobbili’s background score is another one of the few positives of the film.

Verdict: The term Power Play is used in cricket and it is associated with an exciting encounter between the two teams. But this film, starring Raj Tharun leaves the audiences scratching their heads with its illogical scenes and bland screenplay. It will go down as another massive dud in Raj Tharun’s career.

Watch or Not: Give it a skip.

Second half report: The makers failed to satisfy the audience with twists and turns and it seemed like a routine crime thriller.

01.30 P.M: As his life gets ruined with a fake currency case, Vijay proves his innocence with the CC TV footage and Ajay is the person behind the fake notes scam as he often does this with the help of some officials.

01.25 P.M: Vijay goes live on Facebook and reveals the whole truth. Unable to deal with the consequences, Poorna ends her life. Following this, the Police arrests the rest of the people involved in this crime.

01.15 P.M: Vijay withdraws the money in the same ATM where Poorna killed Prince. While searching for his fake currency footage, Vijay finds Prince’s murder video. Now, the scenes between Poorna and Vijay are happening.

01.10 P.M: Prince finds out Poorna’s plan and gets into a verbal fight with her. Following this, Poorna kills Prince in front of an ATM centre.

01.05 P.M: Prince is already married, and Poorna finds the former’s wife as a restriction in their affair. To get rid of her, Poorna plans to kill Prince’s wife, but she fails in her attempt.

01.00 P.M: The movie shifts to a flashback where Poorna is having an affair with her school time crush Prince.

12.50 P.M: At last, Vijay gets the CC TV footage. He uses it to blackmail Poorna and Ajay to know what is happening around him.

12.40 P.M: Poorna also has a connection with the crime as her husband Ajay is behind it.

12.35 P.M: The second half opens with Poorna (Shamna Kasim) contesting as a Chief Ministerial candidate. Her father Kota Srinivasa Rao is already the CM of the state.

First-half report: The makers didn’t reveal the suspense on what’s going in Vijay’s life. We can see some boring routine chasing scenes and the film is not into the exact story yet.

12.20 P.M: When Vijay and Venu are searching for a clue, a truck driver tries to kill them. The lead actor catches him and serves him some beatings and finds his photo in the latter’s mobile phone. Somehow, the truck driver manages to escape from Vijay. And, it’s time for interval.

12.05 P.M: Vijay begins his hunt to get the CC TV footage of the ATM, where he withdrew money.

11.50 A.M: The story revolves around the fake currency case.

11.40 A.M: Vijay withdraws the money from the ATM and goes to a pub. Shockingly, the currency found to be fake. Following this, the police book him in a fake currency case and present him in front of the media.

11.25 A.M: Raj Tarun is introduced as Vijay and he gets arrested in a fake currency case.

11.15 A.M: The movie opens with an unknown accident scene

Ever since its inception, Allu Arjun starrer Pushpa has piqued the interest of the audience. The first Pan-India venture of the Icon star has...
Read more
Movie News

R Madhavan recovers from Covid-19; hopeful to resume his work

R Madhavan has been filming for his forthcoming film called ‘Amriki Pandit’ in Bhopal since the last few weeks. Despite stringent safety measures on...
Read more