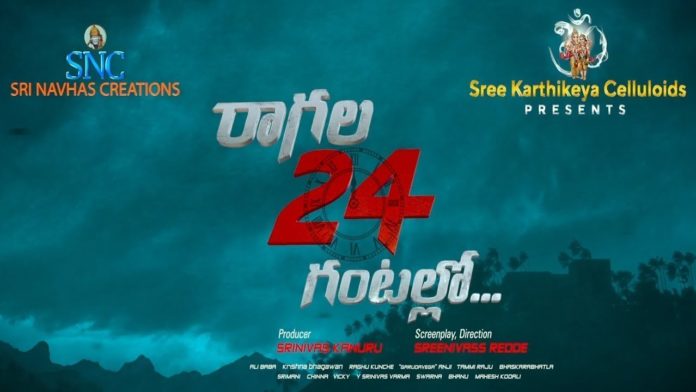 Rahul (Satya Dev), a popular and passionate Ad filmmaker, falls in love with Vidya (Eesha Rebba) and gets married to her. But he reveals his psychic nature after marriage, due to which Vidya suffers a lot. In this backdrop, Rahul gets murdered in a mysterious situation. Did Vidya commit the murder, as shown in the trailer or is there any other twist in the tale? Watch the film to know the rest.

Satya Dev completely nailed his performance. As his character has numerous shades, Satya got a good scope to bring out his acting skills. Irrespective of the movie’s result, he is going to concrete his image as a good actor with Ragala 24 Gantallo.

Eesha Rebba on the other side is decent. Her romantic poses helped for the glamor part in the film. Other prominent roles like Sri Ram, Ganesh Venkatraman, Sreenivas Kanuru, Muskan Sethi are decent in their roles. Krishna Bhagawan’s character is a total waste.

Visuals by ‘Garudavega’ Anji are good. He elevated the emotions well. Raghu Kunche’s background score is another asset of the film. His BGMs elevated several dull scenes. Even the art work is decent. Srinivas Kanuru’s production values are rich.

The second half ranks much below the first half. There are several lagging episodes in this part. Especially, due to the revelation of an important twist within a few minutes of the beginning of second half, one would anticipate that the film is over. But the director tried to extend the point with the revelation of few more twists.

Why is Eesha more concerned of Ganesh’s issue, more than her own issue, what is the relationship between the duo and several such questions keep haunting the audiences watching the film. Adding to it, as the criminal characters were not established well in the first half, twists in the second half appear predictable.

Ragala 24 Gantallo is a revenge story. Writer Sreenivas Varma, tried to deal it in a complete serious manner. But he failed to narrate it in an engaging manner. He has written Satya Dev’s egoistic role well, but failed in linking the role to the overall story.

Heroine, who tries to cover up the murder, later accepts her role in it, in a simple manner. So the audiences lose interest right after she admits it. The director later took the story to a whole new platform and tried to confuse audience.

Sreenivas Reddy, who earlier made comedy films, came up with a thriller. But though he succeeded in extracting good performances from the cast, due the lack of engaging screenplay, all such effort go vain. Editor Tammiraju, who edited the first half well with a tight screenplay failed to repeat the same in the second half.

After watching the trailer, Ragala 24 Gantallo was anticipated to be high on thrilling elements. But the director failed in making any elements, engaging or thrilling. The performance of all the lead actors is good. Ragala 24 Gantallo may appear good to someone, who is strictly committed to the thriller films, with the least concern towards entertainment or any such elements.