Pushpa: The Rise Review – doesn’t rise up to the expectations 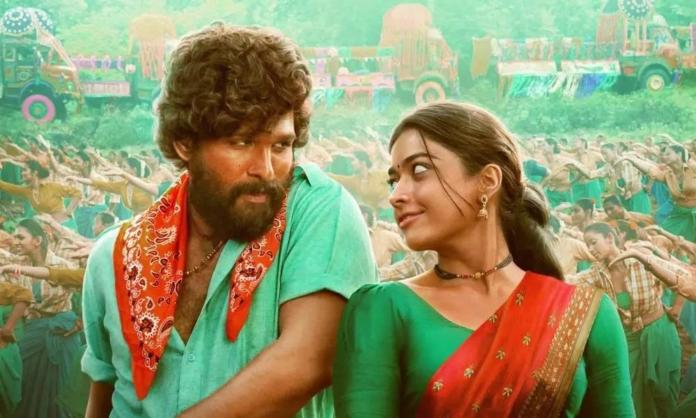 Allu Arjun and Sukumar’s Pushpa: The Rise hit the silver screens across the globe a short while ago. The forest based actioner released amid sky high expectations. Here is what we felt after watching the film.

Story: Pushpa Raj (Allu Arjun) is a vicious red sandalwood smuggler who progresses through the ranks in the syndicate at a quick rate. In the process, Pushpa has to take on the hierarchy and also the police department. Can Pushpa emerge victorious in this ambitious journey? What role does his love interest Srivalli (Rashmika Mandanna) play in this?

Allu Arjun delivers an absolutely exquisite performance in the role of a wicked smuggler. His body language, dialogue delivery, and demeanor are of elite quality. He shoulders the film. His makeover is a class act as well. Rashmika Mandanna in the deglam role is ok. She delivers what is expected of her. Sunil’s character doesn’t reach the expectations and there isn’t much for Anasuya in the first part. Fahadh Faasil is seen only towards the end and he creates an impact with whatever the little screen time he has.

The film revolves around Pushpa Raj who wishes to rule the smuggling world and goes to any extent for the same. As Sukumar had decided to present the film in two parts, he had to stretch out the story for the first part, and consequently, there is nothing much happening in the opening half of Pushpa: The Rise. The story progresses at a rather subdued pace. Except for the interval block, there aren’t too many high moments in the opening half. The slow narration doesn’t help the cause either. The VFX works are patchy as well.

The latter half is where the majority of the action takes place. It sets the stage for the second installment of Pushpa. The climax gives a glimpse of what the second part will offer. As for the love track, which takes the center stage in the opening half, it has a few bright moments. The comedy angle in the love track works well.

Devi Sri Prasad’s background score is ineffective. The audio album he scored isn’t a chartbuster one either. The cinematography is of top notch quality. Production designing is elite and so are the production values, of course barring the patchy VFX works.

Pushpa: The Rise is a below average action drama set in smuggling backdrop. Allu Arjun comes up with a winning act but that isn’t backed by pacy narration. Movie is lengthy, has its own shortcomings, flatly narrated which makes it boring at times. Fahad’s (Banwar Singh Shekawath) entry in the last 30 mins is good but following scenes fell flat. All in all, Sukumar’s Pushpa first part falls short of expectations given the hype around the film

Pushpa: The Rise – Part 1 is an action thriller film written and directed by Sukumar. Produced by Mythri Movie Makers in association with Muttamsetty Media, the film stars Allu Arjun as the titular character alongside Fahadh Faasil (in his Telugu debut) and Rashmika Mandanna.

The film’s music is composed by Devi Sri Prasad, with cinematography and editing performed by Miroslaw Kuba Brozek and Karthika Srinivas respectively.

2:00 AM IST : Pushpa (Allu Arjun) is a leader for  Sandal wood cutters in Seshachalam forest. He gives warning to police who comes after him followed by Dakko Dakko meka song.

2:15 AM IST : Dakko Dakko meka is a decent watch, fans will enjoy. Lorry Chase sequence is good. Puspha gets caught and beaten by police, a good emotional scene. Movie is entertaining so far ..

2:30 AM IST : KondaReddy (Ajay Ghosh) is the main guy who runs Sandalwood smuggling, he comes to bail Pushpa but insults him. Pushpa has an emotional flash backstory, he is step brother of Ajay. Rashmika enters the movie with Sree Valli song, comedy scenes in the song brings laughter.

2:50 AM IST : Scenes between Pushpa and Sreevalli, Comedy dialogues are good. Mangalam Seenu is the leader of smuggling syndicate and boss of Konda Reddy. He hides all the Sandal wood stock in KondaReddy’s go down which police finds out, Pushpa helps to save the sandal wood. Movie has very rustic background, Allu Arjun’s dialect and action is very good.

3:05 AM IST : Aa antava mama song is in Mangalam Seenu party, song is superb. Samanta is smoking hot in the song with her dance and expressions. Pushpa finds out that Mangalam Seenu is selling Sandalwood for much higher price but giving very less share to Konda Reddy. KondaReddy offers a deal to Pushpa that he will give 50% share if he convince Managalam Srinu to give a higher cut.

3:20 AM IST : Engagement between Pushpa and Sreevalli does not go well, Pushpa’s mom gets injured. The birth background of Pusha runs as an undercurrent emotion. Interval scene is superb, Pushpa gives a warning to Managalam Srinu that if he does not give higher rate then he will sell it directly to buyers.

3:40 AM IST: First Half of the movie is a Rustic drama that revolves around Pushpa,  KondaReddy and MangalamSeenu with sandalwood smuggling backdrop. Comedy,love and emotion are interwoven with in story,but few scenes are slow. It does not reach expectations of audience for a Sukumar movie.  Allu Arjun’s acting and body language are good.

3:50 AM IST: Konda Reddy’s asks Sreevalli to come to his house, Pushpa fights with him. Best fight in the movie so far, very well taken. Sami Sami song is good. Konda Reddy gang beats up Pushpa, while that is happening Mangalam Srinu gang kills Konda Reddy.

Final Report : Movie is slow until pre interval scene, picks up pace with interval scene. Second half is a bit better than first half in terms of pace and engagement. Overall movie is rustic drama with good plot in forest backdrop. It’s a Allu Arjun’s show all the way, his action, dialect and body language are flawless. Sunil as main protagonist is not up to the mark. Fahad Faasil & Allu Arjun has carried the movie last 30 mins of the movie and sets the mood for the sequel. Watch this space for first on net unbiased full movie of Pushpa.

It is known that director Venky Atluri of 'Tholi Prema' fame is directing Kollywood star Dhanush for his next bilingual film, which has been...
Read more
Movie News

Krithi Shetty has impressed everyone with her debut performance in Buchi Babu Sana's Uppena. Even before her first film hit the screens, she caught...
Read more
Movie News

There is no stopping Prabhas in recent years. The Baahubali actor has turned super busy with a strong lineup of films, and he is...
Read more
Movie News

Akhanda emerges as a blockbuster on OTT

Nandamuri Balakrishna's Akhanda proved to be a box office blockbuster. The film is now going on a rampage on OTT as well. As per reports,...
Read more

AP employees to go on strike after pay revision

The Andhra Pradesh government released a GO yesterday, granting the state government employees a 23% fitment on their salaries. However, this has caused great...
Read more
Political News

The major mistake that Telugu Desam Party National president and Andhra Pradesh ex-Chief Minister, Chandrababu Naidu did, was to give a free hand to...
Read more
Political News

Jagan’s own financial emergency in AP

The poor financial state of Andhra Pradesh is nothing new to the people of the state. The government's financial position went from bad to...
Read more

It is known that director Venky Atluri of 'Tholi Prema' fame is directing Kollywood star Dhanush for his next bilingual film, which has been...
Read more
Movie News

Krithi Shetty has impressed everyone with her debut performance in Buchi Babu Sana's Uppena. Even before her first film hit the screens, she caught...
Read more
Movie News

There is no stopping Prabhas in recent years. The Baahubali actor has turned super busy with a strong lineup of films, and he is...
Read more
Movie News

Akhanda emerges as a blockbuster on OTT

Nandamuri Balakrishna's Akhanda proved to be a box office blockbuster. The film is now going on a rampage on OTT as well. As per reports,...
Read more