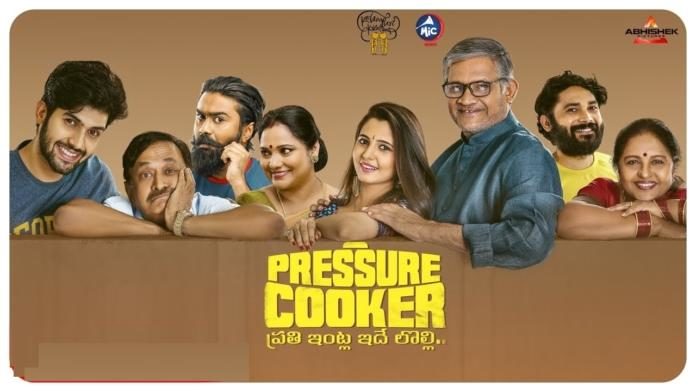 Pressure Cooker which is made on a small budget has impressed everyone with its trailer. The movie has an universal connect point of parents forcing their kids to go and settle in US. Let us see how the movie is.

Narasimha Rao’s only ambition in life about his son Kishore (Sai Ronak) is to send his son to US. After many failed attempts, Kishore finally comes to Hyderabad and settles in a job. He falls in love with Anitha (Preeti Asrani). However Kishore gets visa through his job. What he will do? Will he choose his Dad’s dream or will he sacrifice his dad’s dream for love forms the rest of story.

Preeti Asrani who played child artist role in Malli Rava is the heroine in this flick. She has given best performance. Her expressions in love scenes are simply superb. Sai Ronak is impressive in a confused guy role. He could have done better in emotional scenes. Tanikella Bharani’s role is good. Rahul Ramakrishna – Rajai Rovan roles failed to evoke laughs.

Cinematography is excellent. Visuals in love track gives good feel. Harshavardhan Rameshwar back ground music is good. Rahul Sipligunj, Sunil Kashyap, Smaran has given music for the film and they are impressive. Editing is fine in parts but jump cuts here and there will give negative feeling. Movie’s pace is the biggest minus for the film. We get a feeling that movie is not progressing at all. Dialogues haven’t been effective at all. Sujoy – Sushil has directed this film. Though their point is good, it has been dealt before in films like Shatamanam Bhavati and Pratiroju Pandage. Movie is serious at times. Production values are good.

Pressure Cooker which impressed with its trailer comes up with a good point but the narration is not so impressive. Barring artists performance and few emotional scenes there is nothing much in this movie to offer. You can’t bear this 134 minutes at all.

Immediate reaction at Intermission: Finally relieved with intermission after getting tortured

Immediate reaction at end credits: Good Point but haven’t we watched the same point in better output films before?

Watch or Not?: Yes for parents who force their kids to send US

Pressure Cooker has impressed with its theatrical trailer. It is made in a small budget too. But it is releasing in competition with a big film. It might hinder the collections in full run. The movie’s end result might not be satisfactory.

Emotional scenes need a thumbs up. Love track between Kishore & Anitha is also good. Slow pace is the only thing, which we need to consider.

Coming to the actor’s performance, both the hero and heroine did a very good job with their acting talents.

10.45 P.M: Finally an emotional climax … Kishore realized his mistakes and his love story becomes successful with his ladylove Anitha.. A happy ending.

10.38 P.M: Breakup scenes between Kishore & Anitha followed by a montage breakup song is being showccased now.

10.25 P.M: 30 minutes into the second half.. Very slow pace is going on. Except some of the parents realisation scenes, everything is boring.

10.15 P.M: Hero Kishore gets finally success with his talent in India. Parents realizations scenes are being showcased now.

10.00 P.M: A few comparision emotional scenes between USA and India life style are being showcased now.

09.48 P.M: Second half started with Kishore realization. And he starts searching for job in Hyderabad.

The movie is all about an youngster, who dreams to fly USA for his career. There is nothing interesting as of now. Slow pace tests audience patience while watching Pressure Cooker.

09.30 P.M: Emotional scene between Kishore and his father. With an emotional scene, it’s time for an interval.

09.20 P.M: Love track started between kishore and Anitha. And it’s time for a melody song. The song montages are good.

09.10 P.M: It’s been thirty minutes. But there is nothing interested.

The director tried to bring fee laughs with friends gang comedy. But nothing worked out so far.

09.05 P.M: Kishore trying his best for visa through a consultancy.

08.44 P.M: Kishore escaped from his village and reached Hyderabad. Rahul Rama Krishna and Rajai Rowan are introduced as Kishore friends.

08.41 P.M: Kishore’s parents and other members pressuring him about his USA plan. Scenes are good on the big screen.

08.38 P.M: Actor Sai Ronak gets introduced as Kishore, who is a graduate student looking for opportunity to go the USA for higher studies.

08.34 P.M: Actress Preethi Asrani introduced as Anitha. She is an artist in the film.

‘Pressure Cooker’ is based on engineering graduates who are forced by parents to go to the USA and live a Dollars life.

Written and directed by Sushil and Sujoi, the film has Sai Ronak, Preethi Asrani, Rahul Ramakrishna and Rajai Rowan in the lead roles.

Nagesh Banell and Anith Madadi are the cinematographers while Sunil Kashyap, Rahul Sipligunj, Smaran and Harshavardhan Rameshwar are providing tunes. The directors’ duo along with Appi Reddy are producing ‘Pressure Cooker.’