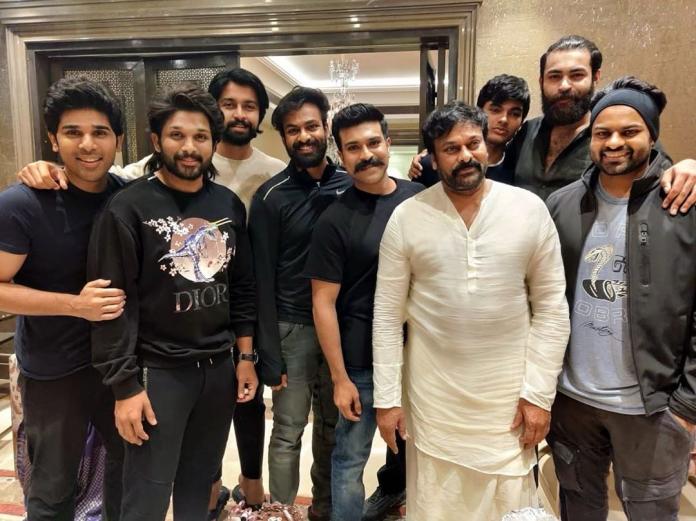 Mega family is one of the biggest family in Tollywood and as many as 9 heroes from this family are acting in Telugu cinema. Mega family follows a tradition that for every festival they will have a get together and for this Sankranthi, mega heroes posed for a candid pic.

Megastar Chiranjeevi, Mega Power Star Ram Charan, Stylish Star Allu Arjun, Supreme Hero Sai Dharam Tej, Mega Prince Varun Tej, Allu Sirish, Kalyan Dhev and Panja Vaishnav Tej. Mega fans are thrilled to see all their favourite stars in a single frame. Power Star Pawan Kalyan who will be making his re-entry into films is missing in this pic. While it is a slight disappointment, Pawan fans are puffed to bits to see Pawan Kalyan’s son Akira Nandan in the frame with other mega heroes.

There has been some anticipation about Akira’s debut into films. Though he has still some time to become a hero, fans are inquiring on when will it happen.

All the three heroes, Sai Dharam Tej, Varun Tej, Allu Arjun scored hits with their last movies and are getting ready for their respective next commitments. While Ram Charan is playing lead role in RRR, Mega Star will soon start Koratala Shiva’s project.

The makers of Nani and Sudheer Babu’s ‘V’ promotions have begun already. Touted to be a multi-starrer film, Sudheer Babu will be seen in...
Read more
Movie News

Super Star Mahesh Babu is on cloud nine with the massive success of his recently-released film, Sarileru Neekevvaru, which released worldwide on January 11....
Read more