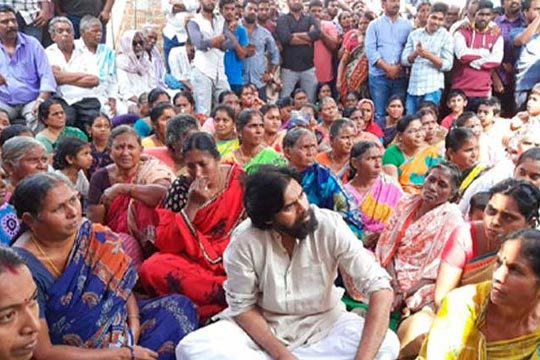 Pawan said that it is unfair on the part of Jagan to cheat public after forming the government. He said that Jagan earlier accepted to continue Amaravati as Capital city but failing to keep it up after government formation. The actor turned politcian asked the CM not to play with the lives of thousands of farmers, when his mere intention was to trouble a few people (TDP).

Saying that the three Capitals proposal was made only to get the political mileage, Pawan demanded to give a proper clarity on the same. If not Amaravati, he challenged the state government to pick one among Kurnool or Vizag as the Capital city instead of three Capitals.

Not stopping there, Pawan also took a jibe against the AP police and government for filing attempt to murder cases against the protesting farmers. He termed it as an unpardonable act to call the farmers as paid artists.

Meanwhile, just like how other opposition leaders are facing troubles in reaching out to Amaravati farmers, even Pawan Kalyan faced the similar situation. AP police stopped his convoy from entering into Amaravati villages. The situation has picked up an immediate intensity with the involvement of Janasena activists.