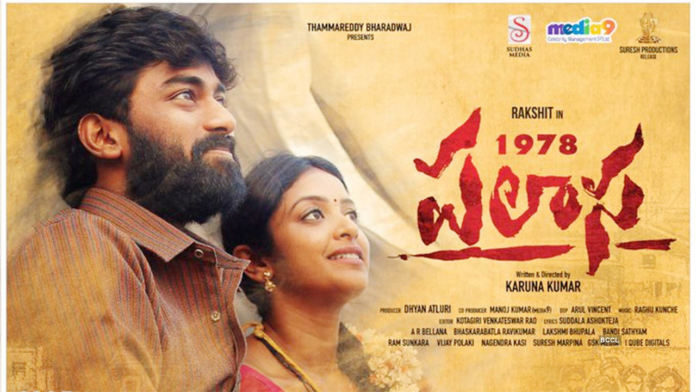 Palasa 1978 is a rustic periodic drama set up in the 70s background. The film managed to caught the audience attention with its interesting theatrical trailer. Let us see how the movie is.

Palasa 1978 is all about the suppression of lower caste people by upper caste and how the lower caste people began revolution. Ranga and Mohana (Rakshit) are two brothers from lower caste. Mohana’s love interest in Nakshatra. Like in every village, this village too has two heads Shavukaru and Chinna Shavukaru (Raghu Kunche). All is not fine between these two. Rest of the story is all about how situations, politics, greediness changed the lives of these people and how they ended up finally.

Every actor who played key role in the movie gives stunning performance. Rakshit is impressive in his second movie. There is lot of improvement from him when compared to his debut film. The person who played Rakshit’s brother is excellent. Nakshatra could have got lengthy role yet she did fine on her part. Raghu Kunche did a decent job. He is not our regular villain. He does subtle acting. Lakshman as a side kick to hero has done good job. Person who played Police Officer character Sebastian is good. As said before, there is nothing to point out about performances.

How about off Screen Talents.?

Dialogues are excellent in the movie. There are few cuss words which are used in the flow at the beginning. Wonder how censor allowed those. Cinematography is good but there is no focus in few scenes. Rustic feel is created effectively. Screenplay is predictable. Story is routine. Kirana Kumar did a good job with direction. He knows how to elevate heroism. With better story and screenplay Kirana Kumar could have done better job. He has handled those departments too. Editing could have been better. Action episodes are praiseworthy.

Music by Raghu Kunche is good, so is BGM. Folk songs are used majorly in the movie. However few songs come as hindrance. No complaints about production.

Palasa 1978 opened with such authentic feel. Dialogues, performances, music and other stuff makes the movie somewhat special. Though the story is routine, there will be no complaints in first half as there are some noteworthy scenes. However pace of the second half gets bogged down and it becomes too predictable. Climax of the film is a big let down as director doesn’t give proper ending.

Immediate reaction at Intermission:
First half has its moments. Impressive stuff with goosebumps moments here and there. However movie’s pace is slow. Second half set up nicely. Let us see.

Immediate reaction at end credits:
Boring second half, first half is a lot better. Screenplay is not that effective.

Watch or Not?: Yes, if you love realistic and rustic dramas.

Box Office Status:
Palasa 1978 is made on a limited budget. Given the genre, backdrop, it could attract few sections of audiences. As the movie too is not that bad it might have better run at the box office. However it all depends on the other movie which are releasing today.

Except for few goosebumps moments here and there, there is nothing exciting about second second half. Scenes are highly predictable and dragged to large extent.

10.30 P.M: Movie comes to an end with some high value dialogues

10.15 P.M: Finally attack on brothers. Emotional scenes are going on.

10.04 P.M: Another twist in the tale in muder planning scenes of brothers

09.54 P.M: Murder attempt on brothers fails once again. Another villain has entered the scene.

09.45 P.M: Movie turns again into revenge mode. Shavukaru’s son is planning to kill hero and his brother. However, Shavukaru’s brother is playing political games for his mileage.

09.32 P.M: Interval twist unfolds in second half. Police officer tries to solve the murder mystery but in vain.

Palasa 1978 is impressive in first half. Rustic feel has been shown in a good way. Dialogues are excellent. There are few highlight moments in the first half so far. Interval block is intriguing. On the flip side, movie’s pace is slow and many scenes can be guessed before hand.

09.14 P.M: Movie’s pace is too slow now. Political game scenes are on currently.

09.05 P.M: Due to some political game Ranga and Mohana (Rakshit) are seperated

08.55 P.M: Fight between Rakshit and Bairagi gang will give goosebumps to audience

08.49 P.M: 40 minutes into the movie Palasa 1978 impresses with its realistic visuals and dialogues. Movie is mainly based on lower and upper caste incidents. Revolutionary counter attacking scenes are good.

08.42 P.M: Movie moves to 1982 Bobbili Puli release time and political scenes in the movie are good

08.30 P.M: Movie is juggling between past and present. Love scenes between Rakshit and Nakshatra are giving some laughs

08.21 P.M: Movie is going in a very realistic way. There is no censor for cuss words

08.20 P.M: Rakshit makes his entry into the movie in a young look

08.12 P.M: After an emotional block movie is into flashback mode

08.09 P.M: Movie opens with a terrific revenge block set up in village temple fair which is followed by Palasa title song which establishes the culture of the village

08.07 P.M: Movie starts with Tammareddy Bharadwaja voice over. Movie based on 70s backdrop set up in the village Palasa

Rakshit who debuted as hero with the movie London Babulu, this time has turned into rugged look for the movie Palasa 1978 which is said to be a realistic periodic drama set up with the village of the same name. Karuna Kumar has directed the movie.

It has turned heads with theatrical trailer which is intense, rugged and true to the script. The movie has gained some buzz with Allu Aravind backing the movie’s director and Suresh Babu came forward to release the flick.

Raghu Kunche has composed music for the movie and he is playing the villain too. Nakshatra is the female lead. Tammareddy Bharadwaja has presented the movie.

However Palasa 1978 is having a low key release with March being dull season for movies. On the other side, examinations for students have started which further can dent the collections. Will Palasa 1978 bring smiles on this small movie makers is to be seen.

Telugu Bulletin is bringing first on net movie updates and review. So stay tuned to the website.

Jr NTR confirms that NTR31 is with Prashanth Neel

Makers include a special number in Allu Arjun’s Pushpa

With theatres remaining shut, the makers of many Telugu films which have already wrapped shoot are planning to go the OTT way. We can...
Read more
Movie News

Jr NTR confirms that NTR31 is with Prashanth Neel

In his latest interaction with an international media portal, Jr NTR made an interesting revelation about NTR31. “My immediate next project after RRR is NTR30...
Read more
Movie News

Makers include a special number in Allu Arjun’s Pushpa

Stylish star Allu Arjun's upcoming film 'Pushpa' is one of the much-anticipated movies of the year. Directed by Sukumar, the film is based on...
Read more
Movie News

It is already known that Jr NTR has contracted Covid. He confirmed the same with a post on social media tester. Tarak and his family...
Read more
Movie News

We know Akhil Akkineni will be joining hands with Surender Reddy for a film titled 'Agent', which was officially announced recently. The latest update is...
Read more

A lot of private companies are hugely profiting from the large-scale oil deposits in Konaseema. Last year, these companies had promised to help the...
Read more
Political News

Almost every state in the country has imposed lockdowns or other restrictions in their respective states, to control the spread of coronavirus in their...
Read more
Political News

YSR Congress Narasapuram MP Raghu Rama Krishnam Raju has been creating trouble for his party for over a year now. The MP said that...
Read more
Political News

AP Assembly Meetings will be held from the 20th of this month in Andhra Pradesh. The Assembly meeting is likely to be held on...
Read more

A lot of private companies are hugely profiting from the large-scale oil deposits in Konaseema. Last year, these companies had promised to help the...
Read more
Political News

Almost every state in the country has imposed lockdowns or other restrictions in their respective states, to control the spread of coronavirus in their...
Read more
Political News

With theatres remaining shut, the makers of many Telugu films which have already wrapped shoot are planning to go the OTT way. We can...
Read more