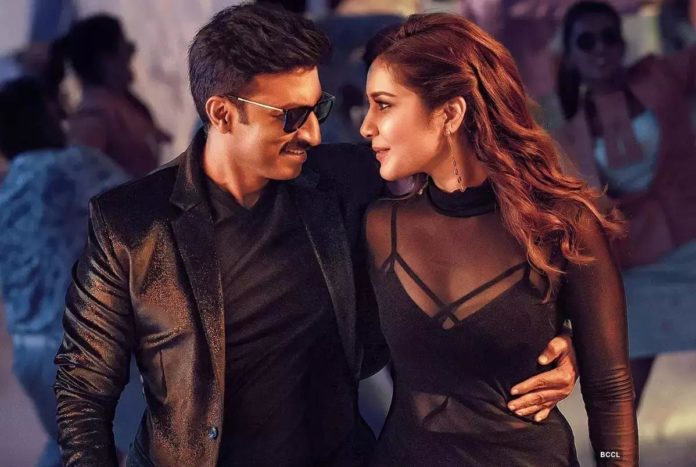 Hero Gopichand and Raashi Khanna starrer Pakka Commercial under the direction of Maruthi has hit the screens today. Let’s see how it goes.

Surya Narayana (Sathyaraj) a sincere judge, resigns his job after giving a wrong judgment in a case that has rich businessman Vivek (Rao Ramesh) as a main culprit. Upset with his father’s ethical standards, Surya Narayan’s son Lucky (Gopichand) becomes a ‘Pakka Commercial’ criminal lawyer. At one point, deeply disturbed with his son’s money-minded nature, Surya Narayana decides to face off his son in the courtroom regarding in land grabbing case of Vivek’s company. Will Surya Narayana be able to win on his son and teach him a lesson? To know that, you have to watch the film on the silver screen.

Gopichand is super stylish on the screen. His screen presence and settled performance are an advantage for the film. His fresh looks and stylish makeover add depth to a few elevation scenes.

Senior actor Sathyaraj gave a good performance in his key role. The confrontation scenes between the father-son duo in the courtroom arguments are executed in a decent manner.

Heroine Raashi Khanna did a decent job in her hyper-active role. Be it her dialogue delivery or her on-screen looks, the sultry diva caught the attention of the audience with her impressive screen presence.

Talented actress Varalaxmi Sarathkumar has also shined in her role with her amazing acting skills.

Rao Ramesh bags yet another good role. His wicked character as a baddie is good. He delivers an impressive performance. Actor Ajay Ghosh is decent in his funny role. Artists who did supporting roles are okay in their respective roles.

Music by Jakes Bejoy felt somewhat dull. He could’ve tried something different with his skills.

Karm Chawla’s cinematography work is a major highlight for the film. His rich frames and colorful lighting setup elevates the film’s premises in a superb manner. Editing by SB Uddhav is okay.

Director Maruthi’s idea of making a fun-coated courtroom drama is good but his execution lacks a solid presentation. If he could have narrated the film in an even better way, the result would have been unanimous. The director has penned some dialogues related to the present political issues in Andhra Pradesh and they certainly entertained the audience.

Production values for this stylish movie are okay.

In an overview, Pakka Commercial is a good commercial entertainer which can entertain the audience. Gopichand’s screen presence and the decent performances from the lead actors are plus points. Although it has a regular template narrative, Maruthi has shaped it well, and the movie is sure to connect to B and C center audiences.

Indian weightlifter Mirabai Chanu made the country proud by winning gold in the women's 49kg category at the ongoing Commonwealth Games 2022 in Birmingham....
Read more