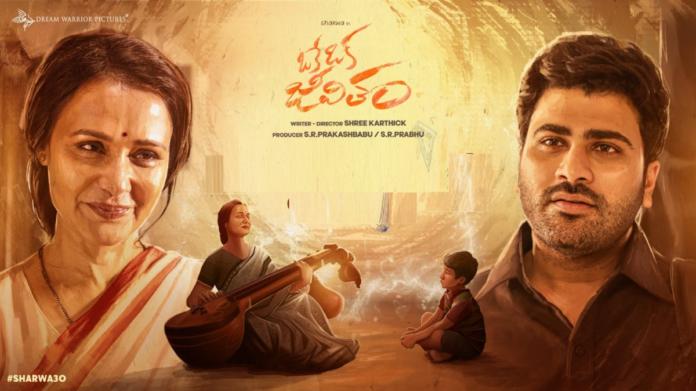 Hero Sharwanand’s film, Oke Oka Jeevitham under the direction of Shree Karthick has hit the screens on September 9th. Let’s see how it is.

Aadi, Chaitanya and Seenu( roles played by Sharwanand, Vennela Kishore and Priyadarshi) are best friends since childhood and have their own problems in life. As a subplot, a scientist named Paul( Naseer) will be doing trials on time travel possibilities. At one point in time, Naseer crosses paths with the three friends and makes them believe in the time travel concept and sends them back to their childhood days to full fill their abruptly left dreams. What will the three friends do after landing in the past? Will they be able to fulfil their desires? How will the time travel change their lives, forms the crucial crux.

Sharwanand is fine with his usual acting. Especially, his acting in a few emotional scenes in the second half will make the audience feel the depth of the subject.

Amala Akkineni is good in her role as a caring mother. The mother-son thread between Amala and Sharwa has been showcased in a beautiful manner.

Priyadarshi and Vennela Kishore evoke good fun in their purposeful roles. The friendship bondage between three friends is showcased in a realistic manner.

Ritu Varma is alright in her limited role. Nassar and other artists who played key roles are impressive with their performance. Last but not least, the child artists gave a convincing performance.

Director Shree Karthick’s idea of interlinking emotional content in the sci-fi thriller is definitely a novel point on the Indian screen. The young director made sure to execute what he had in his mind neatly.

The cinematography work by Sujith Sarang is good as he showcased the difference between two-time frames nicely. Editing by Sreejith Sarang is alright.

The music by Jakes Bejoy is definitely an added advantage for the film as his fresh sound and background score are done superbly. The Telugu version dialogues written by Tharun Bhascker are engaging.

The VFX work is done decently. The production values for this sci-fi thriller are good.

In an overview, Oke Oka Jeevitham is a passable sci-fi drama that has emotional and touching episodes at regular intervals. In box office prospects, the film is likely to give a much-needed hit to Sharwa.