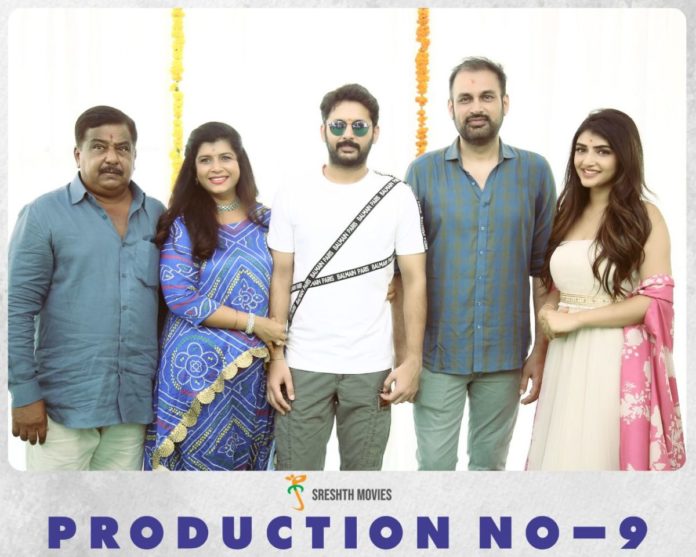 Young and versatile hero Nithiin is not sticking himself for one particular genre, as he is doing wide variety of movies to play different characters. His next outing Macherla Nijojakavargam is in last leg of shooting and the film’s teaser got overwhelming response.

Nithiin is all set to team up with writer-director Vakkantham Vamsi for his 32nd film to be produced by Nikitha Reddy and Sudhakar Reddy under Sreshth Movies Banner in association with Aditya Movies & Entertainments. Rajkumar Akella presents the movie billed to be a pucca commercial entertainer. The most happening actress Sreeleela will be playing Nithiin’s ladylove in Production No 9 of Sreshth Movies.

The yet to be titled movie has been launched today in a grand manner. Puskur Ram Mohan Rao sounded clapboard for the muhurtham shot, while Umesh Gupta of Aditya Music switched on the camera. Director Surender Reddy did the honorary direction for the first shot. Sudhakar Reddy, Nikitha Reddy and Tagore Madhu handed over the script to director Vakkantham Vamsi.

Vakkantham Vamsi who provided stories for many successful movies has penned a pucca commercial subject for Nithiin who will be presented in a completely different role. The movie will have some popular technicians working for it.

Harris Jayaraj will score music for the film, wherein Sai Sriram will take care of cinematography. Sahi Suresh is the production designer.

The film will start rolling, after Nithiin is done with Macherla Niyojakavargam. Other details will be revealed soon.