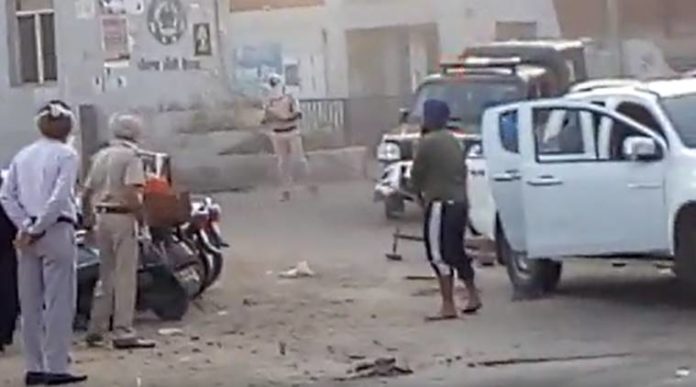 A shocking incident came to light in Punjab today morning where policemen were attacked badly leading them to hospitalisation.

A policeman’s hand was chopped off and two other police officials were injured when a group of people who rammed the barricades, brutally attacked them in Punjab’s Patiala district on Sunday, police said.

Mandi board officials stopped a car at the vegetable market around 6:15 a.m, found a group of four to five ‘Nihangs’ ( Sikhs armed with traditional weapons and dressed in loose blue top.) They were asked to show (curfew) passes. But were rude and crashed the vehicle against the gate and barricades put up there,” Senior Superintendent of Police, Patiala, Mandeep Singh Sidhu said.

An ASI’s (Assistant Sub Inspector) hand was hacked off by a sword. A Station House Officer of Sadar Patiala got injured badly on his elbow and another cop endured an injury on his arm in the assault,” Sidhu added.

The ASI was hurried to the Rajindra clinic but was later referred to PGIMER in Chandigarh and is at present undergoing a surgery.

The Nihangs escaped from the scene after the brutal attack, the SSP said, however were taken into custody later. The incident took place when vehicular movement was restricted as part of the lockdown protocol in the state owing to the Corona virus outbreak.

Apart from 55 passengers who boarded the Mumbai-Haridwar ‘Shramik Special’ train who were diagnosed with positive for covid-19, 32 more passengers were later identified...
Read more
General News

Kim Jong Un back in media – Real or duplicate?

Hyderabad is a dynamic and diverse city with people belonging to different religions and beliefs. People celebrate every festival irrespective of the religion which...
Read more

The Tirumala Tirupati Devasthanams (TTD) decision to dispose of non-remunerative properties has kicked up a controversy with the entire Opposition taking objection to it. Actor...
Read more
Political News

Whatever may happen in the future, it is Nara Lokesh who will handle the party after the TDP Chief Nara Chandra Babu Naidu, being...
Read more

The Tirumala Tirupati Devasthanams (TTD) decision to dispose of non-remunerative properties has kicked up a controversy with the entire Opposition taking objection to it. Actor...
Read more
General News

Apart from 55 passengers who boarded the Mumbai-Haridwar ‘Shramik Special’ train who were diagnosed with positive for covid-19, 32 more passengers were later identified...
Read more
Photo Gallery