Exclusive Interview: Nidhhi Agerwal – It would be great to love someone and then get married.! 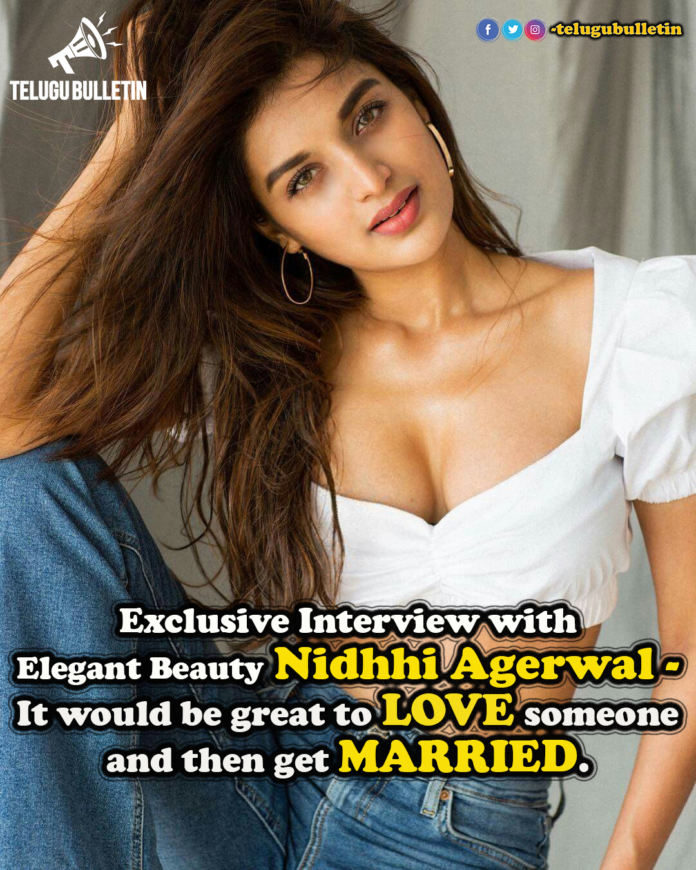 Where are you now?
I am at home with my parents in Bengaluru. I usually stay in Mumbai, but I came down to Bengaluru as soon as I got to know that there would be a lockdown. It’s good to spend time with my family after a long time.

What’s the best show you have watched recently?
Money Heist and Dark.

Can we expect you to dub for yourself in Telugu in the upcoming Ashok Galla movie?
I would really love to dub for myself in that movie if my director allows me to, because I think that when I dub for myself, it would be a huge asset to my character. Even if I can’t dub for this film, I am surely going to dub for the third film from now.

How has your experience been, shooting with Ashok Galla? What’s your character like, in the movie?
Even though he’s a debutant, he knows what he’s doing, and is very well trained, so it’s been a great experience. My character in this movie is quite different from all the ones I’ve done so far. This one is a lot more sober than all of my previous roles.

How was your experience, dancing to Superstar Krishna’s superhit song Jumbare?
It was great and a lot of fun. We tried to match the original song as much as we could, by watching it multiple times. The song has come out really well, and I hope that the audiences will enjoy watching it.

What are your next projects?
I have to complete shooting for my film Bhoomi with Jayam Ravi in Tamil. Then of course, there’s this film with Ashok Galla. I have also signed another film in Telugu, but I can’t yet reveal the details.

There have been rumors that you’re doing a special song in Bellamkonda Srinivas’s Alludu Adhurs. Is that true?
I don’t know where those rumors started from. I’m not doing that song, and I haven’t even been approached by anyone for that.

Do you have any plans of entering into the OTT platform?
Sure. It would depend on the script and director. If I am offered anything worthwhile, then I will surely go ahead.

Are you in a relationship?
No, I’m not.

How was your experience working with the Akkineni brothers: Chaitanya and Akhil?
It was really great. I remember working with both of them at the same time because I shot for both the films simultaneously. Both of them are very well mannered, and are very disciplined. They know what they are doing, and they are both amazing in their own way.

One star that you really want to work with?
Ranbir Kapoor.

One director that you really want to work with?
Mani Ratnam sir.

Your dream role, one role you really want to do?
Anything superhero type of role. I’m really good at action, so I want to do a superhero role.

One role you wish you could’ve done, but has already been done by someone else?
I don’t think I wished to do it, but I really loved Mahanati. Keerthy Suresh was especially phenomenal in it. That film really stood out for me.

You worked with both Ram and Tiger Shroff, who are both spectacular dancers, and you’re a great dancer yourself. Who do you think is the better dancer, and who was the most difficult for you to dance opposite to?
Both Ram and Tiger are great dancers, but their style of dancing is very different from each other. Tiger mixes acrobatics with dance, while Ram has great speed. I don’t think it was difficult for me to dance opposite to either of them because I enjoy dancing, and I took it up as a challenge to match both of them.

Best director you ‘ve worked with so far?
Puri Jagannath Sir. The experience is still very fresh in my mind, and I really loved spending time and talking to him, he’s a great person.

Any plans of getting back to Bollywood?
Definitely. I started my career with Bollywood, and I definitely am going back. I had actually gotten quite a few offers after my first film, but somehow, they all didn’t happen. I am in talks for a few projects right now, so let’s see.

Are you intentionally being picky in Telugu?
I have always been picky. I would like to first hear the story and then go ahead. The director I’m going to work with is also very important for me. So, I take my decision after careful consideration.

Who do you think is your competition in Tollywood?
Everyone is a competition at some or the other level, but the real competition is with myself. I always strive to be better than I was in my previous film.

Who’s your favorite hero and heroine in Tollywood?
Pawan Kalyan sir. He’s simply awesome in whatever he does. His craze is unparalleled. I would love to work with him if given the chance. There are a lot of heroines that I like, Samantha, Kajal, Nayanthara.

Who do you think is the best dancer in India?
Hrithik Roshan

Would like to say anything regarding Sushanth Singh Rajput?
We both were friends, so it was really upsetting when I got to know about it. I was teary eyed when I saw Dil Bechara trailer. I just hope that he’s happy wherever he is, and that he’s found peace.

Shakuntala Devi, starring Vidya Balan in the titular role is a biographical drama based on the life journey of a world renowned mathematician with...
Read more
Movie News

Starring Satya Dev in the lead role, 'Uma Maheshwara Rao Ugra Roopasya' released on Netflix today and it has been garnering a mixed response...
Read more

Shakuntala Devi, starring Vidya Balan in the titular role is a biographical drama based on the life journey of a world renowned mathematician with...
Read more
Movie News

Breaking: Back to the JOB : Nimmagadda re appointed by AP govt as SEC

Finally, the Andhra Pradesh Government has come to its senses after facing repeated jolts in High court and Supreme courts for months. After a...
Read more
Political News

A few days ago, actor Sonu Sood helped a farmer from madanapalli, by giving him a tractor. Nageswara Rao, the farmer, was also offered...
Read more

Shakuntala Devi, starring Vidya Balan in the titular role is a biographical drama based on the life journey of a world renowned mathematician with...
Read more
Political News

Breaking: Back to the JOB : Nimmagadda re appointed by AP govt as SEC

Finally, the Andhra Pradesh Government has come to its senses after facing repeated jolts in High court and Supreme courts for months. After a...
Read more
Political News