OTT Review: LUDO – This game is too boring 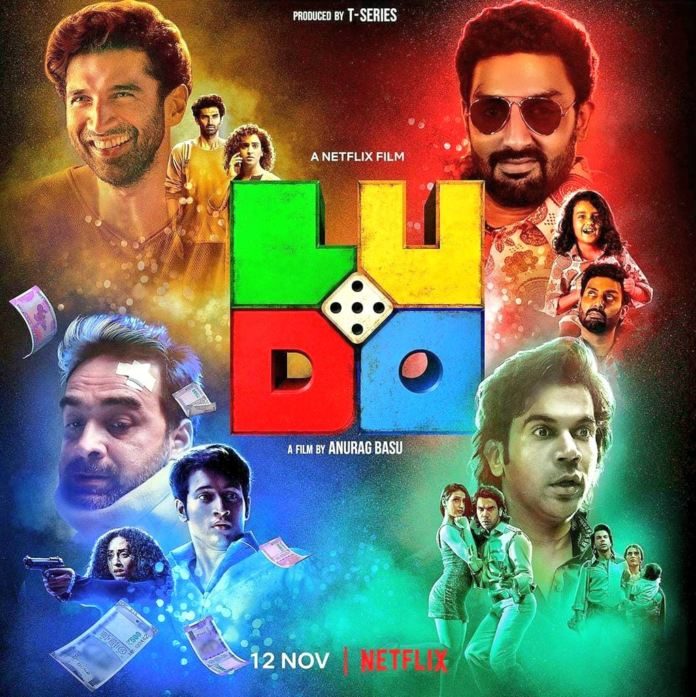 Directed by Anurag Basu, Ludo has an ensemble star cast as noted actors like Abhishek Bachchan, Rajkumar Rao, Aditya Roy Kapoor, Fatima Sana Shaikh, and Sanya Malhotra play lead roles in it. The film is available for streaming on Netflix and here is what we have to say after watching it.

Satthu Bhayya(Pankaj Tripathi), a crooked gangster kills a businessman and keeps the sole witness of this murder, Rahul( Rohit Suresh) by his side. Incidentally, Akash (Aditya Roy Kapoor), Bittu(Abhishek Bachchan), Alok(Rajkumar Rao) who are in no way related to this murder approach Satthu Bhayya for personal reasons. All these members are now neck deep in trouble as a bomb blast accident occurs at Satthu Bhai’s place. How does this incident affect their lives? How do they overcome the challenges ahead of them? The answers to these questions form the core plot of the film.

Ludo is based on the lives of 5 different individuals and the way in which a single incident puts them in deep trouble. Abhishek Bachchan delivers a very good performance. Aditya Kapoor and Sanya Malhotra play on-screen pair and they are reasonably good. Raj Kumar Rao keeps imitating Dileep Kumar and he evokes decent comedy. Fatima Sana Shaikh and Pankaj Tripathi do full justice to their roles.

Anurag Basu narrates the lives of 5 individuals by relating them to a game of Ludo. This concept is intriguing, but we have see quite a few films on these lines of late. There is nothing new Ludo has to offer in terms of novelty. The non-linear screenplay in the first half works in favour of the film and it keeps the audience glued for most parts. But the second half is far too predictable and the viewer can easily gues what’s about to happen next, which takes a toll on excitement factor.

Anurag Basu pens a story with decent premise and banks mainly on the performance of the lead cast and his narrative. However, the film loses steam after 1 hour and it never really regains tempo from there on. Coming to the music, Pritam has done an excellent job with the audio album and the background score. The editor should have been more unapologetic at the editing table as close to 30 minutes could have been comfortably chopped off.

Ludo gets off to a bright start as the opening exchanges are gripping and exciting. But sadly, it is a freefall from there on as the film keeps going on and on and on with nothing much really happening. A few A-center audience might like the film but for others, it is a tedious watch.

Watch or not?: Does not make for a good watch.