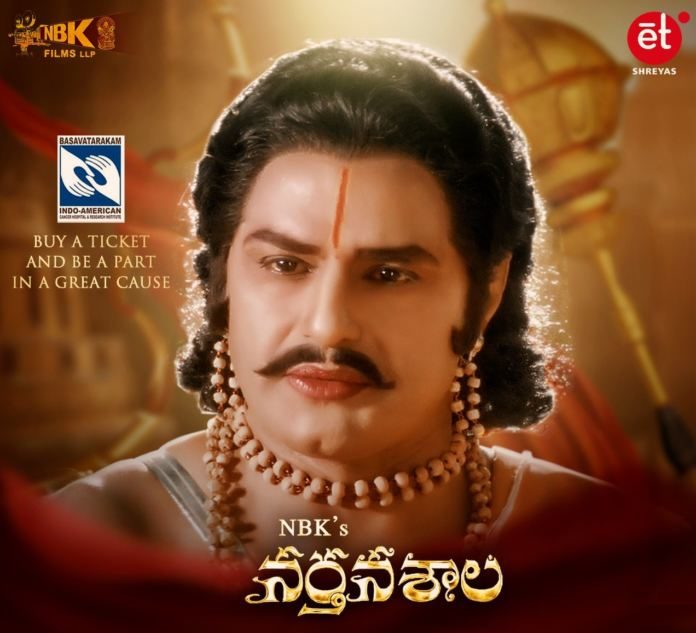 Nandamuri Balakrishna’s dream project has been bringing the very famous Narthanasala to life all over again, in the modern times. For this, the actor even turned producer and director, and began shooting for Narthanasala in 2004. However, the shooting could not be continued because of the sad and sudden demise of Soundarya, who plays Draupadi in the film. Now, after 16 years, the film has finally been released on Shreya’s ATT platform. The film lasts for about 16minutes, and there’s a lot to admire about it.

The story that we get to see in the 16minutes footage is that of the discussion between the 5 Pandavas, and Draupadi, discussing and contemplating the various options of their upcoming exile, and where it would be the safest for them, and what roles they should assume during this exile.

Balakrishna certainly steals the show with his dialogue delivery and especially his monologue about the greatness of Dharmaraju, in the perfect diction. Soundarya will remain a treat to all of her fans, as Draupadi in the few scenes that she is seen. She certainly brings a nostalgic feel to everyone who misses her to this day.Sri Hari is spectacular as Bheema, and once again proves that he is an irreplaceable actor in Tollywood. Sarath Babu is perfect as Dharmaraju, and does his job well.

Balakrishna’s directorial skills are commendable despite being a first-time director. The usage of dubbing for all those actors who are now not alive is also appreciable.

Narthanasala gives you a wonderful and nostalgic feel, considering all the actors involved in the project. The presence of Nandamuri Taraka Ramarao is another highlight of the film. However, of the 16 minutes footage, nearly 6 minutes is occupied by clippings from NTR’s Narthanasala, which may be a slight hiccup. The ending of the movie is perfectly rounded up, with Balakrishna’s dance as Brihannala from Top hero, which will cheer everyone up. On the whole, the film will impress everyone who watches it.

Is it worth watching?
If you don’t mind spending Rs. 60 for watching this film, then yes, it’s a good film to watch on a festival.

Disclaimer: Since Narthanasala is just a 16 minute footage compilation, we are refraining from awarding any stars to it.

If the latest reports are to be believed, JanaSena supremo Pawan Kalyan is presently in home quarantine. A few of Pawan Kalyan’s personal staff members...
Read more
Movie News

The first teaser of Major, an actioner based on the life story of Sandeep Unnikrishnan who laid his life for the country during the...
Read more
Movie News

The government of Andhra Pradesh seems to be hell bent on restricting the box office prospects of Pawan Kalyan’s Vakeel Saab which hit the...
Read more
Movie News

Nandamuri fans and followers are eagerly waiting for BB3 which marks the coming together of Nandamuri Balakrishna and Boyapati Sreenu. The film is slated...
Read more
Movie News

Applauds are pouring in for Pawan Kalyan’s Vakeel Saab from all quarters and Tollywood superstar Mahesh Babu is the latest addition to the list...
Read more

If TDP wins, all the YCP MPs will resign, challenged Minister Peddireddy

AP Minister Peddireddy Ramchandrareddy said that the welfare schemes implemented by CM Jagan are the strength of YCP. He said that they are taking the...
Read more
Political News

Leaders of TRS and Telangana BJP lashes out at Sharmila

YS Sharmila held a Sankalpa Sabha in Khammam district, Telangana. She has been lashed out by the ruling-TRS party leaders and Telangana-BJP leaders for...
Read more
Political News

Sonu Sood has set up a cellphone tower for students

Actor Sonu Sood acts as a helping hand for those who are in need. His generosity was proved during the Corona crisis. He had...
Read more
Political News

JP Nadda and Pawan Kalyan to campaign in Naidupet on Monday

The Tirupati by-polls will be held on April 17. All the political parties in AP are strategizing for their candidate’s victory and the chiefs...
Read more
Political News

Jaganmohan Reddy did not care about the Hindus, says Swami Paripurnananda

Paripurnananda Swamiji lashed out at the ruling YCP government. He questioned why the present government was silent on the scandal that took place during...
Read more

If TDP wins, all the YCP MPs will resign, challenged Minister Peddireddy

AP Minister Peddireddy Ramchandrareddy said that the welfare schemes implemented by CM Jagan are the strength of YCP. He said that they are taking the...
Read more
General News

Akshay Kumar honoured for his contribution towards environmental preservation

If the latest reports are to be believed, JanaSena supremo Pawan Kalyan is presently in home quarantine. A few of Pawan Kalyan’s personal staff members...
Read more
General News

MUMBAI: As Covid-19 situation worsened in Maharashtra topping the country’s Covid-19 graph amid second wave, a decision to enforce a short lockdown in the...
Read more
Movie News

The first teaser of Major, an actioner based on the life story of Sandeep Unnikrishnan who laid his life for the country during the...
Read more