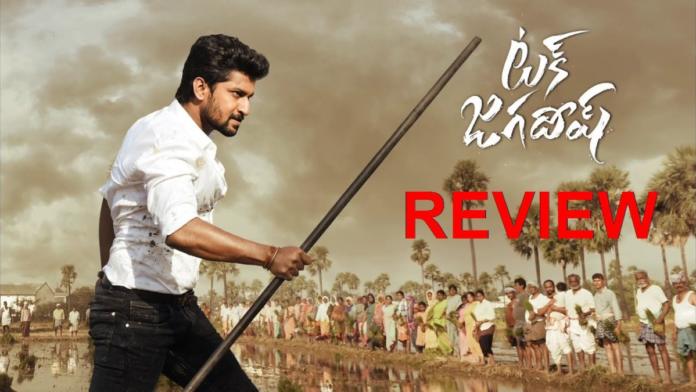 Nani’s Tuck Jagadish skipped theatrical release and premiered on Amazon Prime Video. The film was promoted as a wholesome family entertainer. Here’s our review of the film

Story: Bosu Babu (Jagapathi Babu) is a greedy man who sidesteps his immediate family members to gain a grip over his ancestral properties. But his half-brother Jagadish Naidu stands in his way and sets out on a mission to teach him a valuable lesson. What follows next forms the remaining plot.

Nani is a class act. He delivers an exquisite performance in a role that demands subtle emotions and passive-aggressiveness. He is ably supported by the rest of the supporting cast, which includes Aishwarya Rajesh, Rao Ramesh, Jagapathi Babu, and others. Ritu Varma has limited screen time and she delivers what is expected of her. Aishwarya Rajesh manages to create an impact despite having limited screen time. Daniel Balaji as the main antagonist is okayish.

Shiva Nirvana, who is known for making sensible love stories like Ninnu Kori and Majili has tried his hand at the commercial cinema with Tuck Jagadish. However, he comes to learn that mass films are a completely different proposition when compared love stories the hard way. His narration is a bit too slow-paced and that is a big no-no for a commercial film. The story is outdated and so is the screenplay. But he shows moments of brilliance when it comes to handling emotional scenes. A couple of emotional blocks in the film are heart-touching.

Gopi Sundar’s background score is good. The cinematography is impressive. The rustic locales have been presented in an aesthetic manner. Thaman’s audio album is adequate.

Verdict: Tuck Jagadish has an outdated plot, which turns out to be its biggest flaw. Nani and the rest of the supporting cast do their best to breathe life into the story. A couple of emotional sequences pack a punch. But the film, as a whole, is a mixed bag.

After impressing the audience with two songs -Akdi Pakdi and Waat Laga Denge, the makers of Vijay Deverakonda's Liger delighted the audiences with the...
Read more