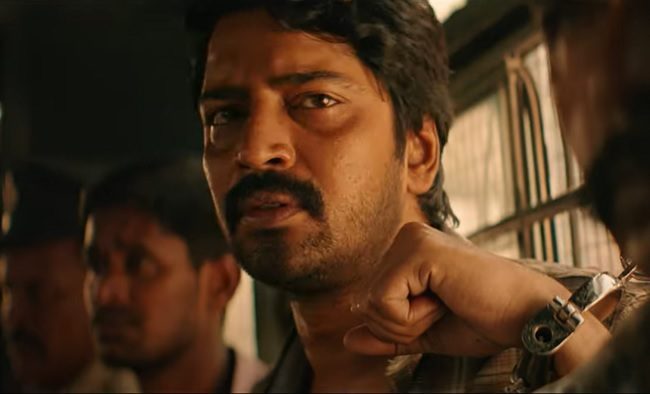 The first poster of Allari Naresh’s ‘Naandhi’ showcased him in a naked avatar and built some good buzz and anticipation. Today, the teaser of the film was released by the makers and it depicts that ‘Naandhi’ is unlike any of Naresh’s previous films.

The teaser opens with Harish Shankar’s voice-over regarding the number of prisons in India and the surprisingly high number of undertrial prisoners who are serving jail time.

Naresh is seen as an undertrial prisoner who tries to escape from the prison but gets caught and is brutally abused by the police. The proceedings suggest that Naresh is an innocent person who goes through a distressful journey and is wrongfully put in prison.

The set-up is very realistic and the atrocities which usually occur in jails are showcased in the teaser. Varalaxmi Sarathkumar is seen as a lawyer while Priyadarshi and Praveen are seen as Naresh’s pals who try to help him.

Background score is apt and so is the cinematography.

This is the first time Naresh is playing such an intense character in his career and it does offer a new feel. The premise of the film looks promising.

Naandhi is directed by Vijay Kanakamedala, and produced by Satish Vegesna under SV2 Entertainment banner. Sri Charan Pakala is composing the tunes and Sid is handling cinematography.

One of the biggest superstars of Indian cinema, Amitabh Bachchan has tested positive for Covid-19 a short while back, as confirmed by himself. Amitabh took...
Read more

Prabhas scored one of the biggest hits of his career with 'Varsham' which was directed by Sobhan. As a token of gratitude, Prabhas is...
Read more

We have to agree that the AP government has been exceptional in conducting the COVID-19 confirmatory tests and stands still when compared to any...
Read more
Political News

The border tension between India and China raised to the peak few days back. Both the countries decided to disengage the troops from the...
Read more
Movie News

We have to agree that the AP government has been exceptional in conducting the COVID-19 confirmatory tests and stands still when compared to any...
Read more
General News

Bill Gates, one of the best visionaries of the world, gave an advice to the US Government to implement complete lock down of the...
Read more
General News

US president Donald Trump, who has been blaming China and WHO about the Covid-19 crisis, didn't wear a mask for long time. Several people...
Read more