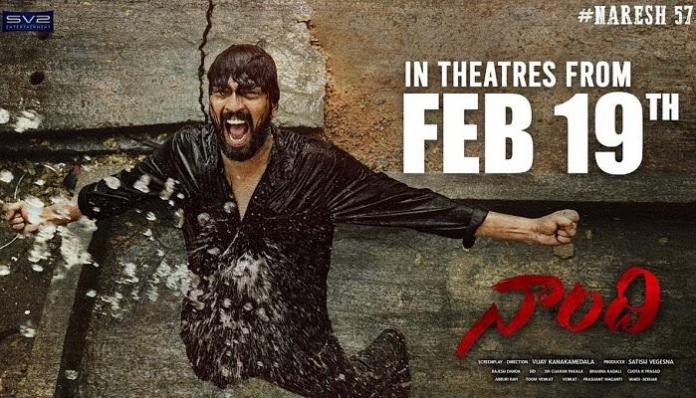 Allari Naresh vowed to do only content-driven films after he rejuvenated his career with Maharashi. His latest outing, Naandhi garnered attention with its raw and intense teasers and trailer. This is the first time Allari Naresh is playing a full-length earnest role in his career and he is pinning high hopes on the film. Scroll on to read our review of Naandhi.

Story: Surya Prakash (Allari Naresh) is a software engineer who hails from a middle class family. He leads a typical working class lifestyle. One day, he meets Navami Gayak and the duo develop feelings for each other and even get engaged. Just as things seem to be going well, Surya is accused of murdering a human rights activist, Rajagopal and the local CI Kishore arrests him regarding the case. The police then create fake evidences to strengthen the case. Surya is sentenced to jail term, despite him claiming not guilty. This is when Aadhya(Varalaxmi Sarathkumar) an advocate takes up Surya’s case and she takes his side. Can Aadhya prove that Surya is not guilty? What are the troubles Surya faces while serving jail time? The answers to these questions form the core plot or the film.

Allari Naresh is seen as an undertrial prisoner who awaits the final judgement regarding his case. Playing such an acute role is something new for him but he scored cent marks with his stunning performance. This will go down as the finest performance in his career thus far. Varalaxmi Sarathkumar plays a lawyer and she carries the right emotions all through the film. She shoulders the film in the second half and she does a very good job. But her dubbing is underwhelming in certain sequences. Devi Prasad is seen as male lead’s father and he delivers a subtle performance. Priyadarshi tickles the funny bone in his introductory scenes. Harish Uthaman plays antagonist and he looks very natural.

Naandhi is one such film which needs technical brilliance along with gripping narrative. Luckily in this case, the technical crew is up for the challenge. Sid’s cinematography is exquisite. His visuals further elevate the theme of the proceedings. Sricharan Pakala’s background score is stirring and it is one of the main reasons why penultimate scenes in the film came out so very well. Chota K Prasad’s editing is a mixed bag. The first half is crisp and engaging but the second half has a few stretched out sequences which could have been chopped off.

Debut director Vijay Kanakamedala picks a hard-hitting and underlying subject for his first film and he needs to be appreciated for the effort. He tries to present the plot in the most authentic and realistic way possible. His narration in the opening half keeps the audience hooked. He extracts the very best of Allari Naresh and the rest of the cast as well. However, Vijay slightly loses his grip in the second half as the scenes pertaining to misuse of section 211 do not pack enough impact. Also, the second half is not as practical as the opening half.The scenes which feature the verbal exchanges in the court are not executed well.

Allari Naresh takes a detour from his usual slapstick comedies and delivers his career best performance in Naandhi. The second half is not as emotionally touching as the opening half and moreover, the ending seems rushed. The film will appeal to audience who love realistic dramas.

Watch or Not?: Naandhi is an emotionally driven drama with realistic approach. Those who love such films will enjoy this Vijay Kanakamedala directorial.

Second half report: Some scenes from the court hearing came out very well. But the emotional attachment with the audiences is lacking. Watch this space for full movie review.

11.40 A.M: Finally, the movie ends with Allari Naresh proving the whole crime point. The truth wins in the Good vs Evil fight.

11.15 A.M: One on one scenes between Allari Naresh and Villain appears now. They are going down in the pace of the film.

11.05 A.M: Court scenes are going on. Some logics are good and we can find some slow narration in between scenes.

10.50 A.M: The movie starts picking up after Naresh and Varalaxmi Sarathkumar files a counter case on the Police officials, who framed the hero in the murder case.

First-half report: Naandhi is a hard-hitting realistic approach. The emotional scenes in the first half are quite good, and the interval episode gives some high. Allari Naresh as Surya Prakash did a masterpiece performance. The visuals and music are top-notch.

10.15 A.M: Here comes an intense action episode and a twist with Radhika Sarathkumar. Her character is good.

10.05 A.M: Emotional flashback ends. After 5 years, the case is still going on. The emotional scenes are shot well and they are quite engaging.

09.50 A.M: During the investigation procedure, Police find some clues in Raja Gopal case, which leads them to Bandi Surya Prakash, and he gets arrested.

09.40 A.M: With the murder of Social activist Raja Gopal, the movie shifts into another phase. Police investigation scenes are happening now.

09.15 A.M: After 5 years, Priyadarshi, who is a YouTube channel guy, entered jail as Radha Prakash. He is like a regular prisoner in Chanchalguda for his controversial title cases.

09.05 A.M: Allari Naresh introduced as Bandi Surya Prakash and he is sent to Chanchalguda Central Jail for a 14 days remand.

Anasuya Bharadwaj and Viraj's upcoming film 'Thank You Brother' is all set to have its digital release on Telugu OTT platform Aha on May...
Read more
Movie News

Rajamouli’s magnum opus project RRR is in final leg of shoot. The onset of Covid second wave has led to indefinite postponement of shoot. The...
Read more
Movie News

The much-anticipated announcement on SSMB28 is here. Mahesh Babu will be joining hands with Trivikram for the much awaited project. It will be funded...
Read more
Movie News

The much-needed wait has come to an end after an official announcement on Superstar Mahesh Babu and director Trivikram Srinivas's next project is finally...
Read more

Covid-19: Lockdown in Delhi extended by another week

Amid rapidly increasing Covid-19 infections in the national capital, Delhi chief minister Arvind Kejriwal on Saturday announced the extension of the lockdown by yet...
Read more
General News

Many have come in favor of all the students of Andhra Pradesh, who have to appear to write their board exams in the coming...
Read more
Political News

It is known news that NTV Chairman Narendra Chowdary Tummala has been booked for alleged irregularities in the Jubilee Hills Cooperative Society. However, there...
Read more
Political News

No more portfolio for Etela Rajendra

A major political scandal broke out in Telangana yesterday, resulting in the shifting of the Medical and Health portfolio from Etela Rajendar to Chief...
Read more

Anasuya Bharadwaj and Viraj's upcoming film 'Thank You Brother' is all set to have its digital release on Telugu OTT platform Aha on May...
Read more
Movie News

Rajamouli’s magnum opus project RRR is in final leg of shoot. The onset of Covid second wave has led to indefinite postponement of shoot. The...
Read more
Political News

Covid-19: Lockdown in Delhi extended by another week

Amid rapidly increasing Covid-19 infections in the national capital, Delhi chief minister Arvind Kejriwal on Saturday announced the extension of the lockdown by yet...
Read more