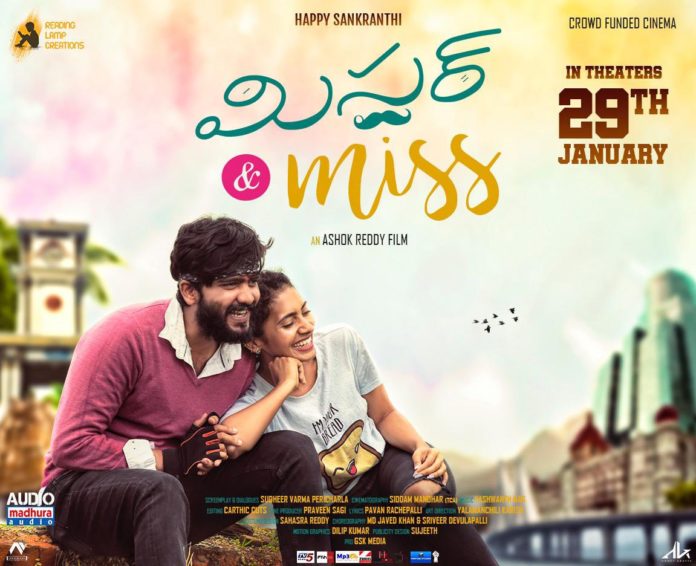 Starring newcomers Sailesh Sunny and Gananeshwari in the lead roles Mr and Miss is out kn theatres now. This ‘A’ rated film is directed by Ashok Reddy and is aimed at the younger section of the audience. Here is our review of the film.

Shiva(Sailesh Sunny) reluctantly agrees to try to bag a software job after being forced by his father. While on his job trials, he meets a HR manager (Sasi) who promises to give him a job if he improve his English communication skills. One thing leads to another and the duo fall in love. They share an intimate relationship. But things fall apart a year later and they decide to call it quits. This is when Siva’s mobile phone which has private videos of the couple goes missing. The rest of the story unveils the struggles faced by the couple to find Siva’s lost phone.

Despite being newcomers, both Gananeshwari and Sailesh do a fairly decent job in the lead roles. They look settled and emote well. The chemistry between the pair is quite good. Gananeshwari’s glamour show will appeal to a section of the audience. The actor who plays the male lead’s friend provides some comic relief in the first half.

The music composer Yashwanth Nag is the pick of the lot when it comes to technical finesse. He carries the mood of the proceedings with his background score and does a good job with situational songs as well. Siddham Manohar’s visuals are pleasing to the eye. Sudheer Varma’s dialogues are partly okayish, but his screenplay is anything but compelling. Not even a single scene in the film has novelty. Most of the scenes are relatively repetitive and lack any freshness. Editing seems rushed and many scenes end abruptly.

The director Ashok Reddy picks a routine and beaten to death storyline. He follows short film template for this film and his approach backfires big time. In a bid to keep the run-time short, many scenes were cut shot and this takes a toll on the narrative. The emotional connect goes missing. The director had no clue of how to take the story forward and resorts to romantic scenes between the lead pair more often than not. Mr and Miss is billed to be a crowdfunded film and it has decent production values.

Mr and Miss is an ‘A’ rated film which caters to a section of the audience. It has a routine plotline and the director tries to hold the attention with romantic scenes featuring the lead pair. But the lack of emotional connect makes the 120-odd minute film look like a 4-hour borefest.

Watch or Not?: You can comfortably skip watching this borefest.

The Enforcement Department has raided the houses of those who are part of the ESI scam. Since this morning, the ED has conducted raids...
Read more
Political News

Mythri Movie Makers have lined up a series of highly interesting projects and they are showing no signs of slowing down yet. They are...
Read more
Political News

The Enforcement Department has raided the houses of those who are part of the ESI scam. Since this morning, the ED has conducted raids...
Read more
Movie News

The YSRCP government has reportedly asked many of its branch offices to vacate their rental offices, and move into government offices, wherever there is...
Read more