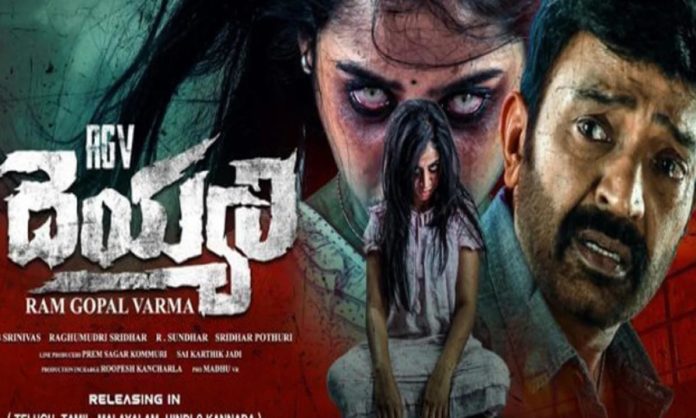 At a time when all the mainstream Telugu movies are being postponed due to the second wave of Covid, controversial filmmaker Ram Gopal Varma released his latest outing ‘Deyyam’ in theatres today. The film stars Rajasekhar in the lead role. Here’s our review of the horror drama.

Story: Shankar(Rajasekhar) is a caring father of Vijji (Swathi Deekshith) who means the world to him. Vijji reciprocates as much love towards her father. But all of a sudden, there is a big change in Vijji’s behaviour. She starts behaving like she is being influenced by a paranormal creature. The rest of the story unveils the real reason behind Vijji’s paranormal acts and the efforts her father puts in to save her.

Swathi Deekshith’s performance is one of the main assets to the film. She delivers an impressive performance and does justice to her role. Rajasekhar looks very natural in the role of a caring father and he comes up with a matured performance. But his dubbing is utterly poor. The dubbed voice doesn’t his demeanour. Same is the case with others as well. The dubbing for Tanikella Bharani, Benerjee, Sana, and others is substandard.

Deyyam has shot 7 years ago but it never saw the daylight until today. So, as one would expect, the story and screenplay look outdated. There is nothing new about the story or the screenplay. The film is more like a recreation of RGV’s previous horror films. It is another dud from RGV that neither has something new nor keeps the viewers engaged. The film has the worst possible technical values and the fact that a single dubbing artist dubs for 3-4 characters proves the same.

Sound mixing which is considered to be a quintessential trait for a horror film is way too bad in Deyyam. We find the better quality output in YouTube videos these days. The producer Natti Kumar tries to cash in on the free availability of movie theatres and rolls out a scrappy film with RGV’s tag. His production values are very poor.

Literally everything barring the above two

Verdict: Deyyam does not have anything going its way and ends up a torturous watch. Bland story, poor narration, and low grade production values make this film a colossal dud. At a time when audiences are thinking twice to come to cinema halls, owing to the second wave of Covid, Deyyam has more than enough negatives to keep them away.

Things are slowly but surely starting to spice up inside the Bigg Boss house as the elimination rounds are getting tighter. The possibility of...
Read more
Movie News

MS Dhoni is a happy man now. He won the IPL with Chennai Super Kings the other night. He is currently in the UAE. Coming...
Read more
Movie News

Balakrishna to take part in Jabardasth

Nandamuri Balakrishna might soon be making a special appearance in the Telugu comedy show Jabardasth. He is likely to take part in the show...
Read more
Movie News

Here comes the biggest chartbuster of 2021, Saranga Dariya (video) is out now. The makers of Love Story have unveiled the full video song...
Read more

All eyes turn towards YSRCP’s plenary

The YSRCP hasn't held its plenary session in over three years, having last conducted its plenary in 2018, ahead of the 2019 general elections....
Read more
Political News

Jagan scores over KCR this time

Telangana Chief Minister KCR's daughter, Kavitha Kalvakuntla, has become the official face of the Bathukamma festival in the state of Telangana, thanks to her...
Read more

Things are slowly but surely starting to spice up inside the Bigg Boss house as the elimination rounds are getting tighter. The possibility of...
Read more
Movie News

All eyes turn towards YSRCP’s plenary

The YSRCP hasn't held its plenary session in over three years, having last conducted its plenary in 2018, ahead of the 2019 general elections....
Read more
Political News

Jagan scores over KCR this time