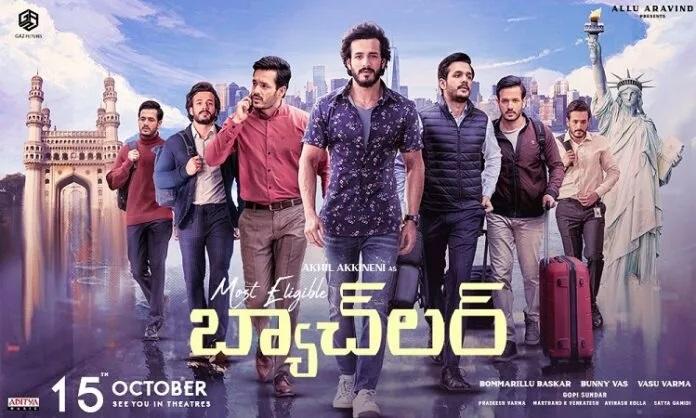 Most Eligible Bachelor, starring Akhil Akkineni and Pooja Hegde as the lead pair is carrying good buzz among the audience. This Bommarillu Bhaskar directorial is out for public viewing today. Let’s check how it is.

An NRI named Harsha( Akhil Akkineni) comes to Hyderabad get arranged marriage. In the process, he comes across a stand-up comedian Vibha (Pooja Hegde). Impressed with Vibha’s independent and practical attitude, Harsha falls for her. Later, how will Harsha manage to impress Vibha and gets married to her? Forms the rest of the story.

Looks-wise Akhil is good as he showed good variance in the character that has multiple looks. His screen presence is decent and elevates a few key scenes.

Star heroine Pooja Hegde is major plus for the film as her appearance is adorable on the screen. She did decent job in the given stand-up comedian role and the same is the case with her performance in crucial emotional climax portion.

Murali Sharma and Pragathi as Vibha’s parents are alright. Aamani and other actors who did key roles as hero’s family are good in their roles.

One of the major minus points for the film is that it has a confusing presentation. The relationship and chemistry between the lead pair is neglected totally in the proceedings.

Adding to it, the father-daughter thread between Murali Sharma and Pooja Hegde lacks proper justification.

The emotional side in the hero and heroine lives has been showcased in an artificial manner.

Cinematography by Pradeesh Varma is top-notch as he brought life to the film with some rich visuals.

Music by Gopi Sundar is soothing as his songs are good as so is the case with the background score.

Editing by Marthand K Venkatesh is disappointing as the senior editor failed to cut the film in a proper way.

Production values for this high budget film are good.

Coming to director Bommarillu Bhaskar, his story has various sub-plots but the execution part is not done in a gripping manner. If he would have narrated the film with a better screenplay version, the result would have been unanimous.