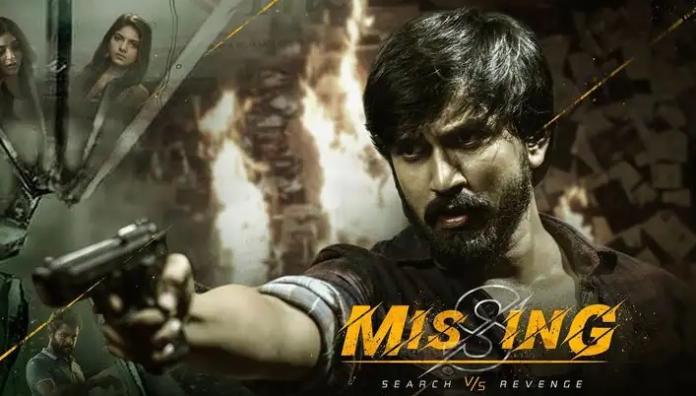 A low-budget movie titled, Missing under the direction of Srini Josyula has caught everyone’s attention with its promos. Starring newcomer Harsha Narra in the lead role, the film had a theatrical release today. Let’s check how it is.

Being a happy-go-lucky couple, Gowtham (Harsha Narra) and Sruthi ( Nikkesha Rangwala) will be leading a happy life. But as an unexpected scenario, while on a road trip, they meet with an accident, and later Sruthi will be missing from the accident spot. After getting conscious, Gowtham gets to know that Sruthi is kidnapped. Later, what will Gowtham do to track Sruthi? How is a young journalist named Meena’s (Misha Narang) role linked in the proceedings? To know that, you have to watch the film on the screen.

Hero Harsha Narra has a decent screen presence and tried to give his best in the multi-shaded character. Though his physical appearance is good, Harsha has to improve his acting skills a lot.

Heroine Nikkesha Rangwala is cute but has limited screen time. The second heroine Misha Narang gets a purposeful role in which she does a good job. But her chemistry with the hero has not been projected in a convincing manner.

Other artists like Ram Dutt in okay as a bad cop. Chatrapathi Shekar gets a meaty role and did his part nicely.

Music by Vasishta Sharma is good as his background elevates the mood of the film nicely. Songs are passable on the screen.

The cinematography by Janaa is fine as he captured the night mood shots neatly with his framing and lighting setup. The sound design by T Udayakumar is alright.

The artwork by Dhara Ramesh is good. Editing by Satya G is adequate. Production values for this tight-budget movie are okay.

Verdict: In an overview, Missing has a decent concept that has scope to explore in an even better manner. But director Srini Josyula diluted the content with a flat narration in the first half and by incorporating too many sub-plots in the latter half. Barring a few episodes and some well-written dialogues here and there, Missing has nothing great to watch in the theatres. All we suggest is to wait for the OTT release and watch it if you have enough time.

Telangana Chief Minister, and TRS chief KCR has faced several losses in the past few months, and the general consensus, according to KCR's surveys,...
Read more
Political News

Veteran Congress leader Konijeti Rosaiah, who held various positions in United Andhra Pradesh including that of Chief Minister, has passed away this morning due...
Read more
Political News

AP employees to get a closure soon?

Andhra Pradesh government employees have been requesting the AP government to settle their pending salaries, pensions and other benefits they're entitled to, for several...
Read more