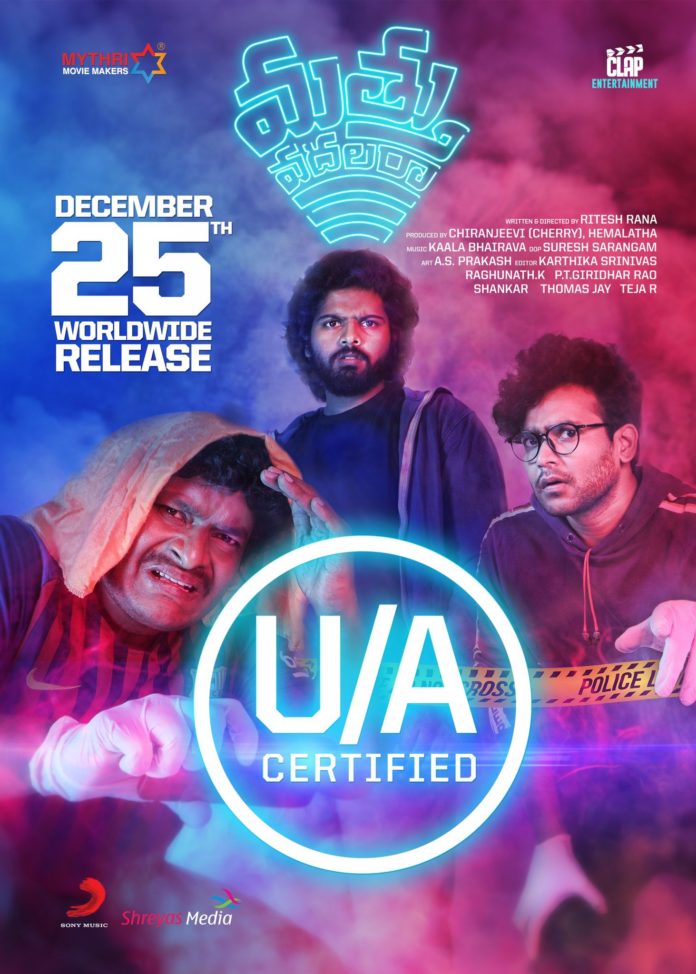 Mathu Vadalara is all about how people are getting selfish when the situations demand them and where it is leading them to.

Babu (Sri Simha), Abhi (Naresh Agastya), Yesudas (Satya) are good friends staying in a small room. Babu and Yesudas work as Courier boys. But when Babu tries to leave his job, he decides to continue it after Yesudas convinces him to do so.

But Babu falls in trouble with Yesudas’s idea. While he is struggling to get away from it, he finds himself in another fresh trouble. All his friends face the mysterious case. How did the trio solve it and what are the consequences they faced in the attempt is what forms the crux of Mathu Vadalara.

When a person is making his debut as a hero from Rajamouli’s compound, audience will have some special expectations on him. But surprisingly, Keeravani’s son Sri Simha failed to meet any such expectations. He just delivered an average performance. Heroine Athulya Chandra is decent throughout the film.

Naresh Agastya remains silent in most of the scenes but comes up with an awesome performance in the pre climax when the actual twist gets revealed. Comedian Satya’s one liners are impressive. Vennela Kishore, Brahmaji and Pawala Shyamala are good in their respective roles.

On the technical side, Cinematography appears good with some stunning visuals. Kaala Bhairava’s music is good. Especially, the way he used Owl’s sound in several shots is great. The makers concentrated on coming up with some editing techniques.

The edit cuts are good. But the overall editing is not up to the mark as there are several scenes that appear lengthy. The makers used Chiranjeevi’s pictures and dialogues in few scenes which could please the mega fans to some extent. Bigg Boss fame Rohini’s serial track is impressive.

Coming to director Ritesh Rana, he picked up a simple story line that can be made as a short film too. But he tried to make it lengthy with too many predictable twists. Though he tried to include few puzzles, most of them appear predictable and thus appear boring. The director succeeded only up to 50% in making the film an engaging product.

Mathu Vadalara starts on a good note and loses interest after some time. The film again picks up at the pre interval and raises good expectations on the other part of the film. But the second half has nothing much to discuss except for a flashback episode and engaging pre climax episode. But the climax again tests patience, making one feel like running out of the theatre. On the whole, Mathu Vadalara is a good attempt from new and young filmmakers but may not engage all sections of audience.

Finally: Mathu Vadalara: Technically good and average in other areas.

1:38 AM: 2nd Climax finished on a happy note with Sri Simha-Satya and with Rohini’s serial track.

1:29 AM: Climax scenes are lagging beyond limit and are boring.

1:25 AM: Pre climax scene explaining about selfishness is impressive.

1:17 AM: Original culprit found and twists are revealing. Interesting scenes are happening

1:12 AM: Vennela kishore – Brahmaji scenes are giving some laughs

1:00 AM: Again heroine Atulya Chandra comes in track and small flash back scenes are on.

12:52 AM: Movie moving with another twist . Hero and batch solving some mysteries and finding the new ones.

12:47 AM: Sri Simha and friends case is getting solved. Satya’s one liners are funny

12:34 AM: Interval block is fake. With this revelation second half started.

Mathu Vadalara has nothing much to discuss for major part of the first half. Bigg Boss fame Rohini fun track, Satya scenes and few other one liners are good. The pre-interval is intriguing raising the expectations at once. Even the interval block is okay.

12:11 AM: With a killer twist, movie inching towards Interval

12:05 AM: It’s 50 mins to movie nothing excited and but comedy works in parts but twists are okay.

Besides proving his acting prowess, power star Pawan Kalyan is known for his singing expertise. It is known that Pawan had earlier sang for...
Read more
Movie News

Young Tiger NTR and Trivikram Srinivas are going to team up once again very soon. This is an old news. Ayinanu Poyi Raavale Hastinaku...
Read more